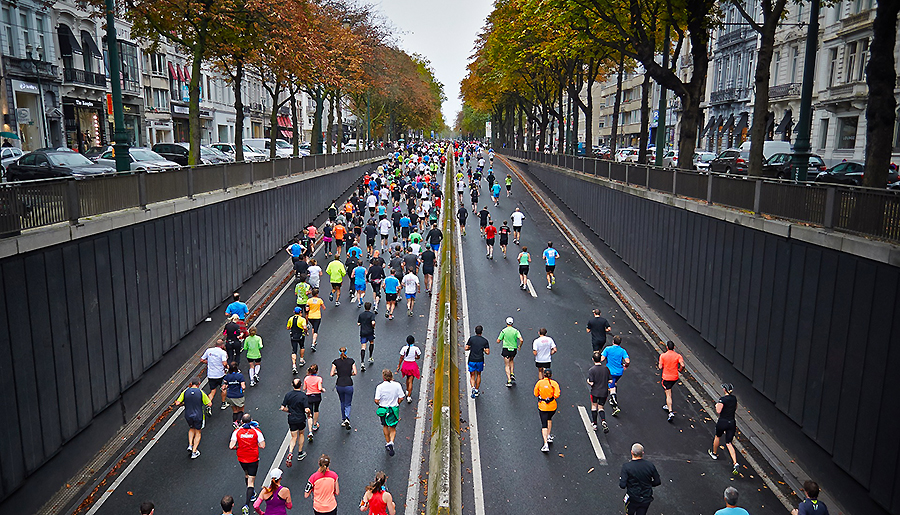 The Top National stories and the Latest headlines across the Active Lifestyle Market for the week of June 22, 2020 covered in the SGB Updates — delivered to your inbox every business day.

Photo courtesy the New York City marathon which was canceled this week despite infection rates of the coronavirus dropping in the NYC area. Organizers and city officials decided it was too risky to run a race with 50,000 participants.

›Jackson Adventures Taps Taylor To Lead Sales Effort | June 26
Jackson Adventures named Brad Taylor as VP of sales. Taylor will manage its global sales initiatives taking over as part of what has been a continual evolution at the brand this year. Read more

›Fourth of July Spending Expected To Decline | June 26
Americans are expected to spend $6.9 billion on food for Fourth of July cookouts and picnics next month, according to the annual survey released today by the National Retail Federation and Prosper Insight & Analytics. That’s down from last year’s record $7.1 billion as fewer people said they will turn out for the holiday but it is still the second-highest amount in the history of the survey and per-person spending is up. Read more

›Nike Reports $790 Million Quarterly Loss | June 25
Nike Inc. reported a loss of $790 million, or 51 cents a share, in the fourth quarter ended May 31, driven by lower revenues and gross margins as a result of the COVID-19 impact on its operations partially offset by lower selling and administrative expenses. Sales decreased 38 percent to $6.3 billion. Read more

›Macy’s Announces Restructuring To Address Sales Impact From The Pandemic | June 25
Macy’s Inc. announced it will reduce its corporate and management headcount by approximately 3,900 as part of a restructuring to align its cost base with anticipated near-term sales as its business recovers from the impact of the coronavirus. Read more

›Davidson’s Adds D&H Tactical | June 25
Davidson’s, one of the nation’s top firearms wholesalers based on Prescott, AZ, has added firearms magazines from D&H Tactical to its product line. D&H Tactical is a division of D&H Industries. Read more

›OBIT: Frank Dassler | June 24
Frank Dassler, the grandson of Puma founder Rudolf Dassler, has passed away at the age of 64. He was Managing Director of the Puma subsidiary in the USA from 1985 to 1987 and group general counsel at Adidas from 2004 to 2018. Read more

›TCS New York City Marathon Canceled Due To Pandemic| June 24
The 2020 TCS New York City Marathon, set to take place on November 1, has been canceled. New York Road Runners (NYRR), the event organizer, in partnership with the Mayor’s Office of New York City, has made the decision to cancel the world’s largest marathon due to coronavirus-related health and safety concerns for runners, spectators, volunteers, staff, and the partners and communities that support the event. Read more

›Winnebago Seeing Strong Bounce Back After Challenging Q3 | June 24
Winnebago Industries reported a loss in the third quarter ended May 30 due to the impact of COVID-19 shutdowns but saw business recover in May and is optimistic about summer selling.  CEO Michael Happe said, “The COVID-19 pandemic has impacted travelers’ views toward how they desire to spend their leisure time experiencing nature and the outdoors.” Read more

›Crocs To Open Second Distribution Center In Ohio | June 23
Crocs plans to build a second distribution center in Dayton, OH next to the warehouse it opened last year near the Dayton International Airport. Read more

›Amazon Sets $2 Billion Climate Pledge | June 23
Amazon announced the launch of a $2 billion internal venture-capital fund focused on technology investments to reduce the impact of climate change. The Climate Pledge Fund program will back visionary companies whose products and services will facilitate the transition to a zero-carbon economy. Read more

›J.C. Penney To Close 13 More Stores | June 23
J.C. Penney Co., which filed for bankruptcy proceedings on March 15, disclosed an additional 13 stores it plans to close on top of the 136 being liquidated. (Read More)

›Puma Opposes Nike’s “Footware” Trademark Application | June 23
Puma has initiated opposition proceedings in connection with Nike’s application to use the word “footware” for use on sneaker-specific software products and services, according to thefashionlaw.com. Read more

›Fleet Feet Finds E-Commerce Boost Amid Pandemic | June 23
Fleet Feet has reopened 170 of its 184 stores in some capacity to strong initial results for many franchisees, according to a profile in Forbes. A decision to build a shared, central e-commerce site for all stores proved to be beneficial as stores were closed. Read more

›UK’s Go Outdoors Exploring Administration | June 23
Go Outdoors, the 67-unit outdoor chain based in the U.K., is exploring administration, a process similar to U.S. bankruptcy. The move was confirmed its owner by JD Sports. Read more

›IHRSA Continues Push For Fitness Industry Relief From COVD-19 Shutdow | June 23
IHRSA is asking Congress for federal relief for the fitness industry so that fitness clubs and gyms across the country may continue to provide vital services (safe, secure, proven places to achieve their health and fitness goals) for their communities. Read more

›Shoe Carnival Sees Strong Q2 Trend As Stores Re-Open And Online Surges | June 23
Shoe Carnival, Inc. has re-opened all but one of its 390 stores across the U.S. and Puerto Rico following closures prompted by the COVID-19 pandemic. Read more

›Patagonia Joins Facebook Boycott | June 22
Patagonia has joined REI and The North Face in announcing plans to suspend advertising on Facebook and Instagram to show support for a movement called “#StopHateForProfit.” Read more

›Varsity Brands Raises $185 Million In New Funding | June 22
Varsity Brands, the parent of BSN Sports, Varsity Spirit and Herff Jones, announced that it has successfully completed transactions that, in aggregate, raised a total of approximately $185 million in new capital to the company. Most notably, existing and new institutional investors have participated in a $150 million capital raise to provide greatly enhanced financial flexibility through the COVID-19 pandemic and for the foreseeable future. Read more

›Nixon Promotes Nancy Dynan To Role Of President | June 22
Nixon, the California-based watch and accessory brand, has promoted Nancy Dynan to the role of president. As President, Dynan will oversee Nixon’s business globally taking on the responsibilities previously handled by outgoing CEO Scott Kerslake who has stepped away from the role to pursue new opportunities outside the Company. Read more

›Safilo Group Ending License Deal With Max Mara | June 22
Safilo and Max Mara have mutually agreed on the termination of their license agreement for the Max Mara collections of sunglasses and optical frames. Read more

›Seventy Percent Of Youth And Recreational Sports Have Resumed In The U.S. | June 22
TeamSnap, the provider of sports management technology, released new data that shows an estimated 70 percent of U.S. youth and recreational team sports activities have returned, or are set to return, in the coming month. Read more

›Outdoor Edge Names New Marketing Director | June 22
Outdoor Edge has named Will Morgan as its marketing director. Morgan brings more than a decade of management and marketing experience to his new position with the Company. Read more