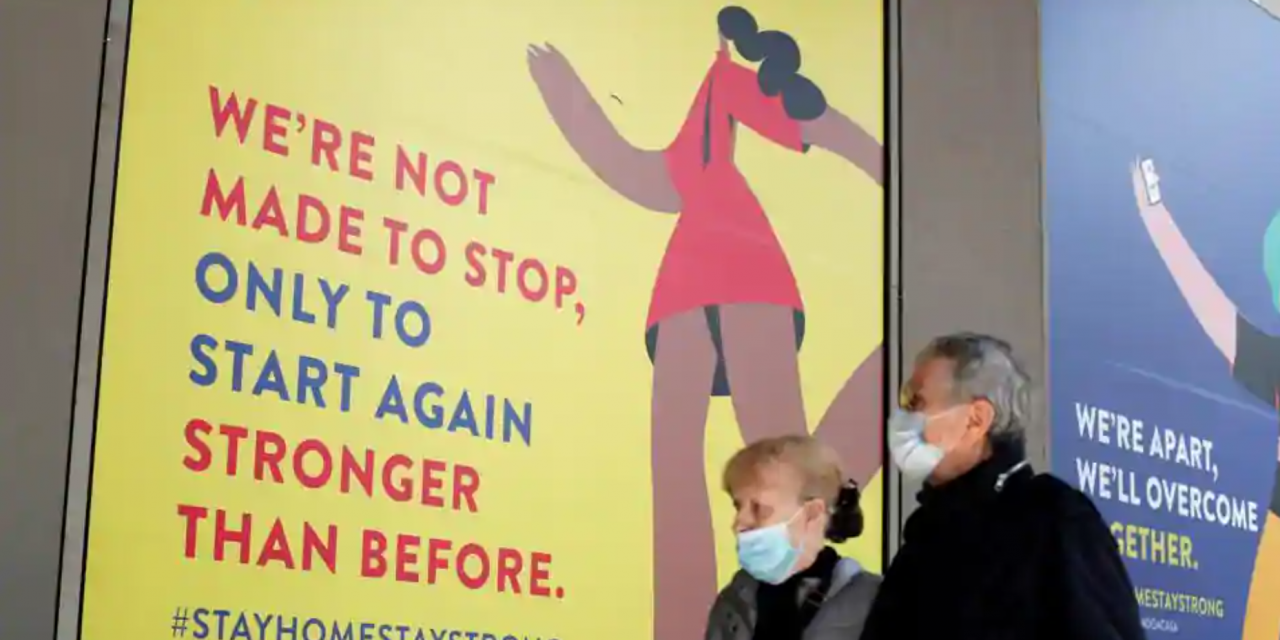 Top National Stories and the Latest Headlines from SGB Updates across the Active Lifestyle Market during the week of May 18, 2020.

›Under Armour Upsizes And Prices Private Offering Of $440 Million | May 22
Under Armour, Inc. announced that it has priced $440 million aggregate principal amount of its 1.50 percent convertible senior notes due 2024, which represents an increase of $40 million from the offering size previously announced. Read more

›Foot Locker Shows Steep Loss In Q1 | May 22
Foot Locker Inc. reported a net loss of $98 million in the first quarter as sales dropped 43.4 percent. Said Richard Johnson, chairman and chief executive officer, “Thanks to the unwavering efforts of our team, we are in the early stages on our road to recovery. Our phased reopening of stores is underway, and our plan is to build, be back and be better than before.” Read more

›5.11 Appoints VP Of Global Product | May 22
5.11, Inc., the maker of technical apparel, footwear and gear, hired Matt Page, a former executive at brands like The North Face, Under Armour and Mountain Hardwear, to 5.11’s executive team as VP, global product. Read more

›Cotton Council International Joins Sustainable Apparel Coalition | May 22
Cotton Council International (CCI) announced that it has joined the Sustainable Apparel Coalition (SAC) and will use the group’s sustainability measurement suite of tools, the Higg Index, to drive environmental and social responsibility throughout its supply chain. Read more

›Aku Outdoor Expands Sales In Southern States | May 22
Aku, the Italian manufacturer of hiking and trekking boots, announced that The Uber Group has been retained as its sales rep agency to support sales through the Southeast. Read more

›Hummel Replaces Umbro As Everton Sponsor | May 22
Everton, the Premier League Club, agreed to a three-year kit deal with the Danish sportswear company Hummel. Umbro has been the sponsor since 2014. Read more

›Deckers Brands’ Q4 Profits Slide | May 21
Deckers Brands Inc. reported earnings on an adjusted basis were off 35.3 percent as sales slid 4.9 percent. A 51.8 percent hike in Hoka One One sales was unable to offset a 17.9 percent decline at UGG tied to store closures. Read more

›SFIA Survey: COVID-19 Hits Industry Hard, Yet Fitness Surges | May 21
Over 70 percent of sports and fitness manufacturers and businesses reported a sales drop of over 25 percent for the month of April (comparing April 2020 sales to April 2019 sales), with 30 percent of respondents reporting a sales drop of over 75 percent, according to SFIA’s COVID-19 Response Survey. However, there were pockets of strength — home fitness equipment and at-home sports equipment sales grew in the same period. Read more

›Nike To Let Liverpool End Season With New Balance | May 21
Liverpool, the English Premier League club positioned to win its first title in more than 30 years, reached a settlement with Nike that will allow the team to continue to wear its New Balance kit until the end of the season. Read more

›Canada Goose Lays Off 125 Employees | May 21
Canada Goose Holdings Inc laid off 125 workers, about 2.5 percent of its global workforce, as a measure to cope with the impact on its business from COVID-19. Read more

›Macy’s Warns Of $1 Billion Quarterly Loss | May 21
Macy’s Inc. predicted a first-quarter operating loss in the range of $905 million and $1.11 billion as the department store giant was forced to shut stores to slow the spread of the coronavirus. First-quarter sales are expected in the range of $3 billion to $3.03 billion, down from $5.50 billion a year earlier, a decline of 45 percent. Read more

›Under Armour To Offer $400 Million Convertible Senior Notes Due 2024 | May 21
Under Armour Inc. announced that it proposes to offer $400 million aggregate principal amount of its convertible senior notes due 2024. Read more

›Equinox Holdings’ Debt Rating Lowered | May 21
S&P Global Ratings lowered the debt rating of Equinox Holdings Inc. following the fitness club operator’s closing on an amendment to its partial guarantee on the credit facility of its affiliate company SoulCycle Inc. that will allow it to defer its required repurchase of the affiliate’s debt to February 2021. S&P said it views the move as tantamount to a default. Read more

›Decathlon Introduces Scan & Go In Germany | May 21
Decathlon, the world’s largest sporting goods retailer, announced it will roll out a mobile self-checkout solution across its 81 stores in Germany. Read more

›Vans Gives Back With An Appreciation Discount | May 21
Vans will be extending its give-back program and offering a 30 percent discount to all first responders in the U.S. to thank them for their dedication and bravery in the fight against COVID-19. Read more

›Shoe Carnival’s Q1 Revenues Drop 42 Percent | May 20
Shoe Carnival Inc. reported a loss of $16.2 million in the first quarter. Revenues fell 41.9 percent as the impact of substantially all stores being closed for approximately 50 percent of the quarter was only partially offset by increased e-commerce sales. As of May 5, over 50 percent of its stores had reopened. Read more

›Survey: 50 Percent Of Parents Fear Kids Will Get Sick By Returning To Sports | May 20
While most parents of children who participate in organized sports look forward to a return to play, approximately half fear they or their child will get sick when restrictions are lifted due to COVID-19, according to a survey from North Carolina State University, in partnership with the Aspen Institute’s Project Play, Utah State University and George Mason University. Read more

›NFHS Releases Guide For Returning To High School Sports | May 20
The National Federation of State High School Associations (NFHS) has released guidance for its 51 member state high school associations to consider in re-opening high school athletics and other activity programs across the U.S. Higher-risk sports such as football and wrestling were seen presenting more of a concern for transmission of COVID-19 than lower-risk sports like running and golf. Read more

›Nightstick Partners With H&G Marketing To Expand Outdoor Retail Reach | May 20
Nightstick, based in Wylie, TX, announced the selection of H&G Marketing as its new U.S.-focused coast-to-coast marketing agency for the outdoor and sporting goods categories.  Read more

›Epix Gear Shifts To American Production | May 20
Colorado-based sports apparel company, Epix Gear, announced the re-storing of its apparel production with the opening of a Made in the USA facility in Tempe, AZ. Read more

›Sales Of Outdoor And Sports Toys Surge | May 19
Amidst COVID-19, U.S. families are turning to outdoor play to manage social isolation and the cancellation of schools and organized sports. Sales of Outdoor and Sports Toys surged by $193 million during April 2020, a 51 percent increase over the same time period last year, according to NPD. Read more

›VF Corp Donates More Than $10.3 Million To COVID-19 Relief Efforts | May 19
VF Corp., The VF Foundation and the VF family of brands, has donated more than $10.3 million in funds, products and services worldwide to stem urgent medical needs and to help those struggling with COVID-19. Read more

›PVH Corp. Announces Phased Reopening Of Global Stores | May 19
PVH Corp., owner of a portfolio of brands including Tommy Hilfiger and Calvin Klein, released a phased reopening plan for its stores worldwide as the company continues to navigate through COVID-19. Read more

›Kohl’s Q1 Sales Tumble 41 Percent | May 19
Kohl’s Corp. reported sales tumbled 40.6 percent in the first quarter to $2.43 billion from $4.09 billion a year ago. The department store operator has taken a series of measures to combat COVID-19 including cutting costs, lowering CAPEX spending by about $500 million, and suspending share buybacks and its quarterly dividend. It ended the quarter with about $2 billion in cash. Read more

›Outdoor Brands Invests In Public Lands Defense | May 18
The Conservation Alliance has awarded five grants from the organization’s Public Lands Defense Fund to groups working to defend the Roadless Rule, the National Environmental Policy Act and Cascade Siskiyou National Monument. The awards were funded with the support of Velocio, Patagonia and The North Face. Read more

›Early Summer Months Looking Grim For Southeast Destinations | May 18
Approximately two months after destination resorts in the Southeast were expected to launch their summer season, widespread uncertainty due to COVID-19 brought destination visits to an almost virtual halt, according to DestiMetrics and Inntopia. Read more

›Footwear Sales Show Steep Decline In April | May 18
Hoka One One and On Running ran counter to the market by generating gains in April despite sharp declines overall due to store closures in response to COVID-19, according to NPD. Read more

›Solid Winter Ski Season Ends With A Thud At Western Mountain Resorts | May 18
Six weeks after the winter ski season ended on March 15, in the wake of ski resort closures mandated by COVID-19, mountain destinations “officially” ended the 2019/20 ski season at the end of April. As mountain towns emptied out quickly, lodging properties in six western states ended the season on a disappointing note, according to DestiMetrics in its monthly Market Briefing from Inntopia. Read more

›Cycling Sales Surge In First Quarter | May 18
Cycling sales increased 31 percent to $1.3 billion in the first quarter of the year, according to NPD, with more than half of those sales in March attributed to the stay-at-home order mandated by President Trump. Read more

›Centric Brands Files For Bankruptcy | May 18
Centric Brands Inc., the apparel and accessories licensing firm, voluntarily filed for protection under Chapter 11 of the U.S. Bankruptcy Code to execute a debt restructuring. (Read More)

›The TJX Cos Moves Annual Meeting To Virtual | May 18
The TJX Cos. Inc. announced that it will hold its 2020 annual meeting of shareholders virtually due to the ongoing public health impact of the COVID-19 and to support the health and safety of the company’s shareholders, associates, directors, and communities. Read more

›Nike And Adidas Among J.C. Penney’s Top Unsecured Trade Creditors | May 18
Nike was left with an unpaid bill of $32.1 million in the bankruptcy of J.C. Penney, according to court documents. Other firms in the active lifestyle space landing on the list of the Top 50 unsecured creditors included Adidas, owed $7.1 million; Supreme International, $5 million; Izod, $4.6 million; and New Balance, $3.2 million. Read more

›Spalding Responds To NBA Sponsorship Change | May 18
Spalding said it remains committed to the sport of basketball despite news that its long sponsorship of the NBA as the official game ball will soon end. Read more

›Thin Air Virtual Media Show Invites Retailers To Register | May 18
Thin Air, the new virtual trade show for the outdoor industry to be held from June 24 to 26, has opened up registration to outdoor specialty retailers. Read more

›The Big Gear Show Postpones Inaugural Event To 2021 | May 18
The Big Gear Show (BGS), an outdoor industry trade show focused on hardgoods with an emphasis on paddling, cycling, climbing, and camping gear, announced the cancellation of its inaugural event, originally planned for July 22 to 25 in Salt Lake City, UT.  Read more

›Michael Phelps Foundation Expands Children’s Mental Health Program | May 18
The Michael Phelps Foundation (MPF) and Panasonic Corporation of North America (Panasonic) announced the expansion of the IM Program offering to Boys & Girls Clubs of America through the organization’s commitment of more than $100,000 in grants to provide social-emotional curricula as children return to clubhouses across the nation. Read more

›California’s Fitness Industry Unites To Bring Jobs And Fitness Back | May 18
Members of California’s fitness industry have joined together to form the California Fitness Alliance (CFA) with the goal of safely and responsibly initiating the reopening of clubs and fitness facilities throughout the state. Read more