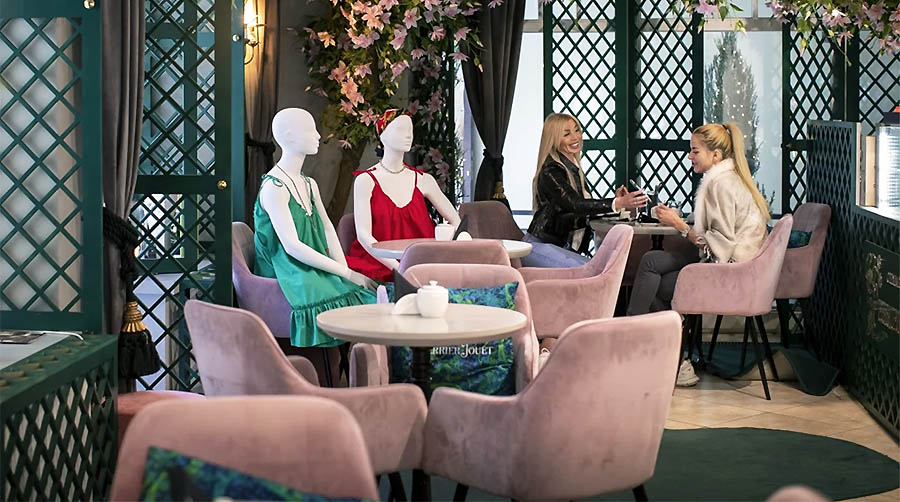 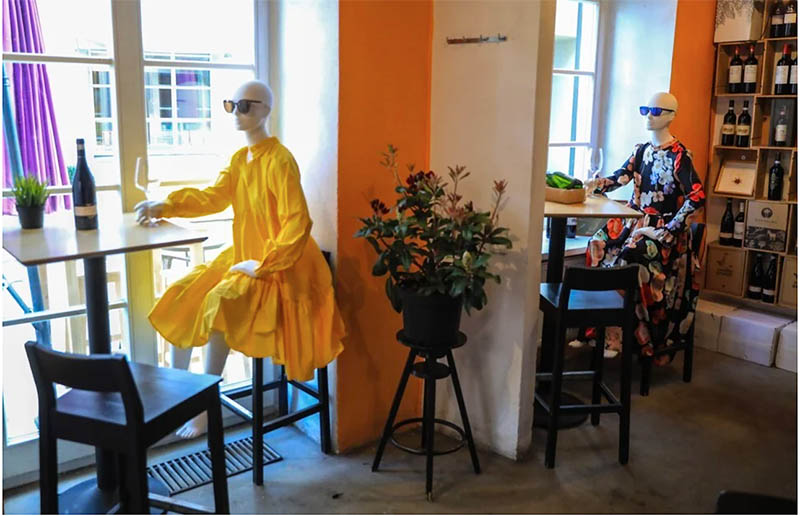 Over 60 male and female mannequins are dressed in local fashion in Lithuania’s capital, Vilnius, to coax customers back to dine in restaurants. The mannequins will have round-the-clock reserved seating in the capital’s restaurants and cafes. Photo courtesy AP

More top National stories and the Latest Headlines from SGB Updates across the Active Lifestyle Market during the week of May 25, 2020 below.

›Adidas And Allbirds Collaborate To Accelerate Sustainable Footwear Design | May 29
Adidas and Allbirds announced a partnership that seeks to “open the doors to each other’s suite of sustainable innovations” in an attempt to create a shoe with the “lowest carbon footprint ever recorded.” This marks the first time in Adidas’ history in which the brand has collaborated with another footwear brand not under its umbrella. Read more

›Premier League To Return June 17 | May 29
The English Premier League, the most-watched league in the world, has agreed to a provisional return on June 17. Due to COVID-19, matches will take place behind closed doors. Read more

›Nordstrom’s Q1 Revenues Sink 40 Percent | May 29
Nordstrom Inc. reported a loss of $521 million in the first quarter that included impairment charges related to store closures, premium pay and benefits and restructuring charges. The retailer said the quarter reflected actions to strengthen its financial flexibility through inventory and overhead cost reductions and position the business for the long-term through an acceleration of its strategic initiatives. Read more

›Burlington Stores Q1 Sales Decline By Half | May 29
Burlington Stores Inc. reported revenues tumbled 51 percent in the first quarter ended May 2 as all of the off-price stores closed on March 23 and remained close for the remainder of the quarter. Over 400 stores will have reopened by this weekend. Read more

›JCPenney Reopens 150 More Stores | May 28
JCPenney, which filed for bankruptcy protection on May 15, said it has reopened 150 more stores bringing the total number of locations that it has reopened during COVID-19 to 304. Nearly 500 stores should be reopened by June 3. Read more

›Edible Water Bottles On Horizon To Replace Plastic | May 28
London-based start-up Notpla has created Ooho capsules, which can either be eaten in their entirety or bitten into and sipped from. Ooho’s are fully biodegradable and are a sustainable alternative to plastic bottles. Read more

›Decathlon’s Debt Ratings Affirmed By S&P Despite COVID-19 Impact | May 28
S&P Global Ratings said it expects Decathlon’s sales, earnings and cash generation “will decline sharply” in 2020 versus 2019 due to government COVID-19 lockdown measures that closed the majority of its stores. But the rating agency affirmed its  ‘A-2’ short-term rating on the company as it expects the French sporting goods chain’s strong record of 10 percent to 15 percent annual growth to resume in 2022. Read more

›The 2020 Boston Marathon Has Been Canceled | May 28
The Boston Marathon has been canceled for the first time in its 124-year history. The Boston Athletic Association (B.A.A.) said Thursday that they instead will have a “virtual event” in which participants who verify that they ran 26.2 miles on their own will receive their finisher’s medal. Read more

›Yeti Announces Pricing Of Secondary Offering | May 28
Yeti Holdings Inc. announced the pricing of an underwritten public offering of 6.07 million shares at a public offering price of $32.65 per share. Read more

›Under Armour Announces Phased Store Reopenings In North America | May 28
Under Armour announced details for the phased reopening of its owned stores in North America. The company reopened its first U.S. stores to customers on May 15 and opened additional stores last week. By this Friday, Under Armour will have welcomed customers back to nearly 50 percent of its North America stores. Read more

›Peloton Teams With ESPN For First-Ever Pro-Athlete All-Star Ride | May 28
ESPN will air Peloton’s first-ever All-Star Ride on Saturday, May 30, featuring 16 pro-athlete participants (eight men and eight women) from across the sports landscape, all of whom are current Peloton members. If the participating pro athletes collectively reach an output of 3,000, Peloton will donate one million meals to the Food Bank for New York City. Read more

›5.11 Reopens Retail Stores | May 28
5.11, Inc., the maker of technical apparel, footwear and gear, announced it is gradually reopening its U.S.-based retail stores in light of the restriction lifts surrounding COVID-19. Read more

›Burton U.S. Open Canceled | May 28
Burton Snowboards announced that due to ongoing uncertainties around COVID-19, the company has made the difficult decision to cancel the 2021 Burton U.S. Open Snowboarding Championships, which was slated to take place March 1 to 6, 2021 at Vail Mountain Resort in Vail, CO. Read more

›Big 5 Posts Q1 Loss, Sees May Sales Recovering | May 27
Big 5 Sporting Goods Corp. reported a loss in the first quarter ended March 30 that came in line with projections provided in late February and said April’s comps tumbled 39 percent due to store closures tied to the coronavirus; however, May’s sales and merchandising margins are seeing an uptick as stores reopen. Read more

›American Outdoor Brands Prepares For Spin-Off With Name And Stock Ticker Symbol Change | May 27
American Outdoor Brands Corp. announced that it will change its name to Smith & Wesson Brands Inc., effective June 1. The change reflects the company’s preparation for the previously announced spin-off of its outdoor products and accessories business as a tax-free stock distribution to its stockholders. Read more

›Nike Announces Retirement Of John Thompson From Board | May 27
Nike Inc. announced that John Thompson, Jr., a director of the company since 1991 and legendary coach of the Georgetown University men’s basketball team, has decided to retire. Read more

›Golf Retailing Recovering | May 27
As the percentage of golf retail stores open to foot traffic continues to increase, a growing number of golfers indicate their concern for visiting physical store locations is subsiding, according to the National Golf Foundation’s latest industry-wide surveys. Read more

›Li & Fung Completes Privatization | May 27
Li & Fung Limited, the largest sourcing agent in the global apparel business, announced the company would delist from the Hong Kong Stock Exchange at the close of trading on Wednesday, marking the successful completion of its privatization process. Read more

›Adidas Partners With Yavapai College | May 27
Yavapai College in Prescott, AZ announced that Adidas will be its official uniform apparel and footwear supplier starting on July 1, 2020. Read more

›Shawnee State Partners With BSN, Nike | May 27
Shawnee State University in Portsmouth, OH entered into a multi-year partnership with Nike through BSN Sports to continue to make Nike the official apparel of SSU Athletics. Read more

›Afterpay Offers COVID-19 Support To Retail Community | May 27
Afterpay is teaming up with A Common Thread, an initiative led by Vogue and the CFDA, which raises funds and awareness for the American fashion community and Baby2Baby, which provides children living in poverty with diapers, clothing and all the basic necessities. Read more

›ISPO To Launch Digital Live Conference | May 27
ISPO has developed a digital live conference, ISPO Re.Start Days, for the sports and outdoor industry. The event, to be held between June 30 and July 1, will offer orientation for the “new normality” during and after COVID-19. Read more

›NHL Announces Plan To Return Straight Into The Playoffs | May 27
The National Hockey League (NHL) announced a 24-team playoff format that was accepted by the NHL Players’ Association, becoming the largest North American professional sports league to announce definitive plans for a return. Read more

›Igloo To Hire Up To 500 To Support Strong Demand | May 27
As a direct result of growing demand, Igloo announced it will be looking to fill up to 500 temporary manufacturing positions in its Katy, TX-based plant. Read more

›REI Forms Partnership With West Elm | May 27
REI Co-op formed a partnership with West Elm, the home furnishings retailer, on an outdoors-themed home goods collection. The collection marks the first time REI will sell gear through another retailer. Read more

›Yeti Appoints Tracey Brown To Board Of Directors | May 27
Yeti Holdings Inc. announced its Board of Directors has appointed Tracey D. Brown, chief executive officer of the American Diabetes Association, as an independent director, effective immediately. Read more

›Obit: Dick Lipsey | May 26
Richard “Dick” Lipsey, founder, president, and CEO of SBRnet with a long career in supporting research for the sporting goods industry passed away on May 15, 2020 at the age of 89. Lipsey underwent bypass surgery for a heart attack and was set to return home when he contracted COVID-19. Read more

›Thor Industries Releases RV Consumer Survey Report | May 26
A survey of RV owners and prospective owners across North America found that 94 percent of consumers still plan to vacation in 2020. The survey from Thor Industries, a leading maker of motorhomes and campers, explored changes in RV consumer travel and purchase intent since the onset of the coronavirus pandemic. Read more

›Mouthguard Club Lands $1M Venture Capital Investment | May 26
Retainer Club, a subscription retainer service, and Mouthguard Club, which provides athletes with custom-designed mouthguards, announced the closing of a $1 million venture capital investment from Will Ventures, an early-stage venture capital firm that focuses on companies at the intersection of sports and technology. Read more

›Vida Shoes To Undergo Corporate Restructuring | May 26
Vida Shoes International,  a licensee of fashion footwear brands, said it made the difficult decision to streamline teams throughout its operation with layoffs and temporary salary reductions. The announcement comes on the heels of COVID-19 as companies across industries are facing cost-cutting measures. Read more

›Wildwater Reopens After Brief Coronavirus Closure | May 26
Wildwater, the oldest outfitter in the Southeast, announced that it has resumed activities at all five of its adventure centers with new social distancing and health guidelines in place. Read more

›The Orvis Company Appoints Simon Perkins President | May 26
Orvis announced the appointment of Simon Perkins to president. Perkins will assume full strategic and operational leadership of the company as president and is the third generation of the Perkins family to lead Orvis since 1965. Outgoing President/CEO Bill McLaughlin will act as an advisor through the transition period. Read more

›Puma Signs Iceland Soccer Team | May 26
Puma announced that it has entered into a long-term partnership with the Football Association of Iceland (KSI) to become the official technical sponsor of men’s, women’s and youth teams. Read more

›Macy’s Announces Proposed Offering Of Senior Secured Notes | May 26
Macy’s Inc. announced that it is offering $1.1 billion aggregate principal amount of senior secured notes due 2025 in a private offering. Macy’s intends to use the net proceeds from the offering of the notes, along with cash on hand, to repay all amounts outstanding under its revolving credit facility. Read more

›RunSignup Survey Shows Race Organizations Expect 45 percent Of Revenue In 2020 | May 26
Revenue shortfalls for the current year are expected to be significant for race organizations of all sizes with the average expectation that they will see 45 percent of their 2019 revenue in 2020, according to a survey of ace organizers conducted in early May from RunSignup, a technology provider for U.S. races. Read more

›Clarks To Eliminate 900 Jobs | May 26
Clarks, the U.K.-based footwear company, said it was cutting 900 jobs globally and reviewing funding options to address liquidity needs caused by the coronavirus, according to Reuters. Read more 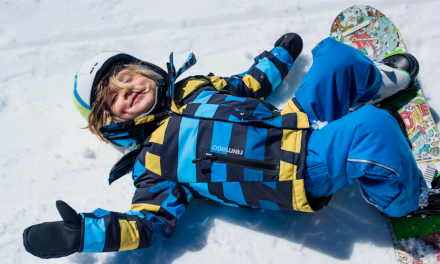