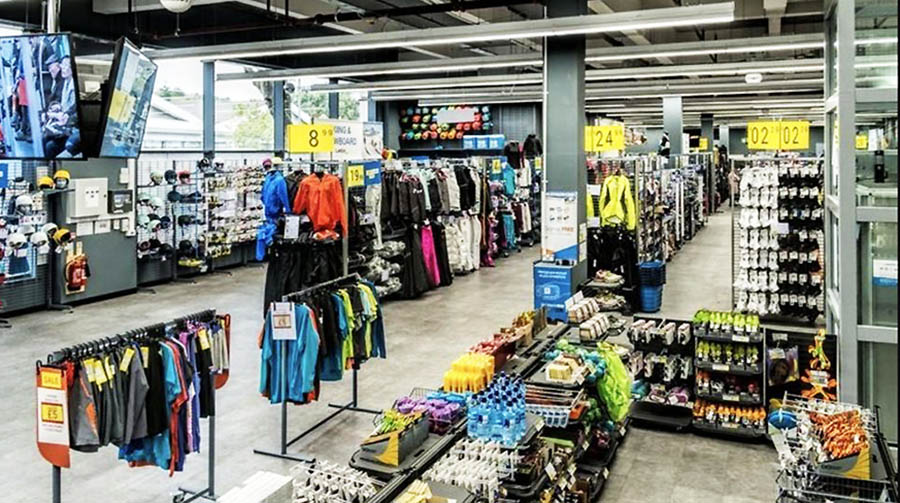 S&P Global Ratings said it expects Decathlon’s sales, earnings and cash generation “will decline sharply” in 2020 versus 2019 due to government COVID-19 lockdown measures that closed the majority of its stores. But the rating agency affirmed its  ‘A-2′ short-term rating on the company as it expects the French sporting goods chain’s strong record of 10 percent to 15 percent annual growth to resume in 2022.

S&P said in a statement, “As a result of government-mandated closure of shops selling nonessential goods, including clothes and sports items, we believe Decathlon will suffer a substantial decline in sales in almost all of the regions where it operates. Decathlon’s sales could drop by 20 percent-25 percent in 2020 compared with 2019. Overall, we expect S&P Global Ratings-adjusted EBITDA to contract by €750 million-€850 million from the €1.1 billion reported in 2019, which should translate into an adjusted EBITDA margin of just 7.1 percent in 2020 against 12.5 percent in 2019, negative free operating cash flow of €100 million-€200 million, and adjusted leverage peaking at 3.0x-3.5x in 2020 from 1.3x in 2019 (based on preliminary numbers available for the fiscal year 2019). This is despite Decathlon’s material cost-reduction program, with about €1 billion of savings on inventory purchases and €750 million on rent, personnel expenses, and selling, general, and administrative expenses.

“We expect the long-term effect on Decathlon’s credit standing to be somewhat limited, thanks to the group’s active cost management and prudent financial policy. After 2020, we project the group’s leverage will rapidly decline. Half of Decathlon’s year-end debt is short term and used to fund seasonal working capital. We understand that Decathlon has the ability to significantly moderate its purchases for the next season, which will likely translate into less short-term debt by year-end. The group has already reduced its purchases by about €1 billion compared with the same period of 2019, essentially focusing purchases on the most successful product categories. Adding to this, we expect Decathlon to cut capital expenditure (CAPEX) to about €400 million for 2020 against the €550 million-€600 million it had planned. Equally, we understand that the shareholders have agreed to renounce dividends until earnings resume their pre-COVID-19 levels. Although the heavy pressure that we expect on earnings in 2020 drives most of the leverage increase for 2020, even a modest recovery thereafter should allow a return to credit ratios commensurate with our rating. In our forecast, we see the group achieving 2019’s topline levels no earlier than 2023, but it should be able to restore credit ratios to the 1.5x-2.0x range, as adjusted by S&P Global Ratings, by end-2021.

“This crisis will temporarily halt Decathlon’s earnings and growth story and may translate into changing consumer behaviors. Although we acknowledge a high degree of uncertainty about the rate of spread and peak of the coronavirus outbreak, we anticipate an unprecedented recession across Decathlon’s geographies for 2020 (see our macroeconomic and credit updates here: www.spglobal.com/ratings) which will likely halt, at least momentarily, Decathlon’s track record of robust growth over the past few years. We anticipate important and durable effects on discretionary spending, as well as reduced traffic in stores as a result of lasting social distancing measures. Furthermore, we expect customers to be increasingly price-sensitive after the recession and to switch parts of their purchases online, a segment we deem less profit friendly. In our view, these trends, if confirmed, will likely weigh on the group’s growth and profitability

“That said, we believe Decathlon’s strong business fundamentals and solid financial resources will help weather this crisis and reinforce its market positions. Not only do we expect the sports segment to recover gradually, thanks to consumers’ increasing focus on healthier living, but we also see it as a somewhat more resilient and less volatile than other segments of the apparel market, such as fast fashion or affordable luxury segments. Decathlon benefits also from its relative niche positioning, with a differentiated value proposition notably against large branded sports retailers such as Nike or Adidas, focused on affordable specialized sports goods. This segment is less exposed to competition from large internationally diversified players. Hence Decathlon’s market position may strengthen over time as smaller, less financially robust, local competitors will likely suffer more profound effects in the aftermath of the COVID-19 disruption. This is provided that the group develops its still relatively new omnichannel activities, which should enable it to face an increasing demand from larger, more established online players, such as H&M, Inditex, or Nike.

“Decathlon has adequate near-term liquidity to withstand temporary shocks from store closures and weaker consumer demand. The group recently started implementing measures to preserve its liquidity buffer, adjusting for different sales decline scenarios, including no dividends for 2020, deferrals of some nonessential CAPEX, and reduced merchandise orders. It has also applied for state-funded part-time work compensation in most of its European markets. Another means to boost liquidity is a possible reduction in rent payments due in the next few months, which the company is pursuing case by case in renegotiations with landlords. The group has also put in place facilities maturing in less than 12 months, aimed at ensuring timely payment of suppliers. In late April, it expanded its commercial paper program to €1 billion from €750 million, partially funded by the French Central Bank (up to €560 million). Similarly, the group has increased its committed credit lines maturing beyond 12 months to €1.29 billion from €890 million in December 2019, highlighting the group’s sound relationship with its banks.”

The French-based, family-owned business is the world’s largest sporting goods retailer with over 1,600 stores worldwide and a presence in 69 countries. Its recent international expansion has led to the opening of many new territories including Australia, Israel, South Africa, Chile, Canada, and also the U.S.