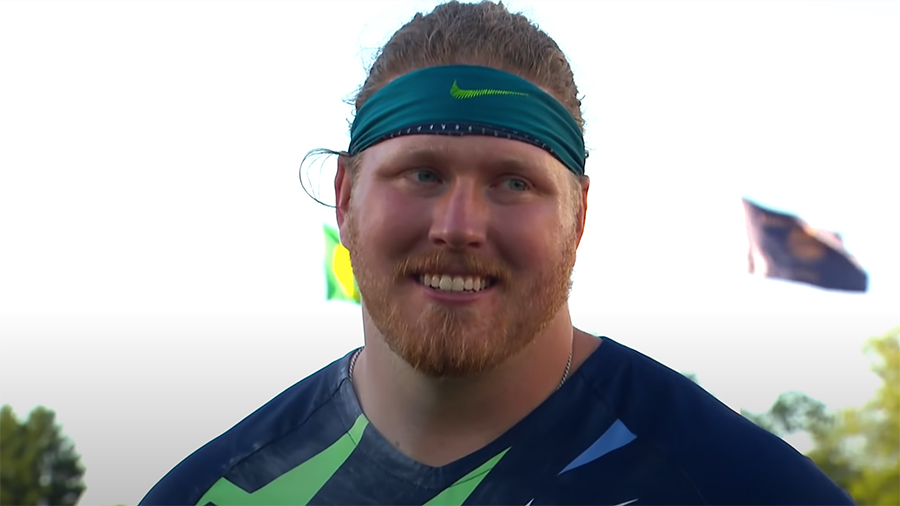 The Top National stories and the Latest headlines across the Active Lifestyle Market for the week of June 21, 2021 covered in the SGB Updates and delivered to your inbox every business day.

This week’s Athlete is Oregon native Ryan Crouser who “obliterated” the shot put World Record at last week’s Olympic Trials. The 30-year old shot put record was made back in 1990 by Randy Barns with a throw of  75 feet, 10 1/4 inches. Few ever thought it would be surpassed, but Ryan crushed it on June 18 with a toss of 76 feet, 8 1/4 inches. Watch his throw here or click on the still shot below. 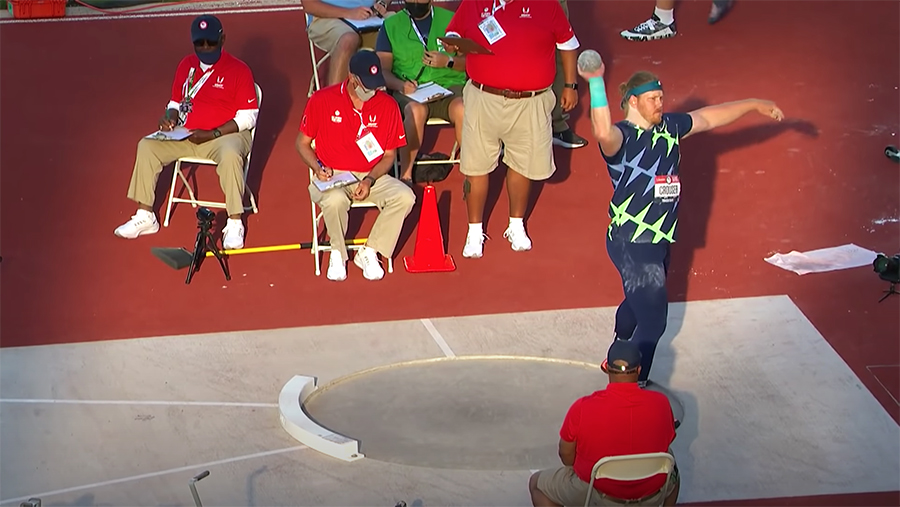 »Golf Rounds Played Climb 18 Percent In May
Golf rounds played in the U.S. rose 18.1 percent for the month of May, according to Golf Datatech. For the year-to-date period, rounds are ahead 33.6 percent. Read more

»Hibbett Initiates Quarterly Cash Dividend
Hibbett Inc. announced that its Board of Directors has declared an initial quarterly dividend of 25 cents per share on the company’s common stock. The commencement of the company’s first ongoing dividend program is reflective of the company’s growth and commitment to delivering long-term shareholder value. Read more

»EY Future Consumer Index Finds Consumers Prioritizing Sustainability
Globally, levels of concern among consumers in response to the COVID-19 pandemic are moderating slightly, according to the seventh edition of the EY Future Consumer Index. A key emerging trend is the prioritization of sustainability, although the majority of consumers are relying on companies to act as leaders in driving positive social and environmental outcomes. Read more

»NRF Welcomes Bipartisan Infrastructure Framework
The National Retail Federation said it is encouraged by a bipartisan group of Senators and the Biden Administration finding agreement on a framework for an infrastructure package. Read more

»Goat Group Valuation More Than Doubles To $3.7 Billion In Latest Funding Round
Goat Group has closed a Series F funding round of $195 million, reaching a valuation of $3.7 billion, more than double its prior valuation of $1.8 billion following its Series E round announced in September 2020. Read more

»Canada Goose To Go Fur-Free By End Of Next Year
Canada Goose announced that it would end the use of fur in all its products. Through a phased approach, Canada Goose will end the purchase of fur by the end of 2021 and cease manufacturing with fur no later than the end of 2022. Read more

»Mizuno Establishes Partnership With LPGAMizuno announced a new partnership with the LPGA. The Japanese manufacturer will have a presence at various professional and amateur women’s events in 2021 and produce content for the LPGA’s Women’s Network. Read more

»Parley For The Oceans Joins Forces With Brita
Parley for Oceans has formed a long-term partnership with Brita to end the use of single-use plastic water bottles. Read more

»KOA Report: 53 Million Households Expected To Go Camping in 2021
The KOA Monthly Research Report, June Edition, indicates that 48 percent of campers plan to camp this summer, including 19.8 million that intend to camp over the Fourth of July holiday. Read more

»Wolverine Worldwide Names Blake Krueger’s Year-End Successor As CEO
Wolverine World Wide Inc. announced that Brendan Hoffman, president and a member of the company’s Board of Directors, will also become chief executive officer at the end of the year. Hoffman will succeed Blake Krueger, who will assume the newly created role of executive chairman. Read more

»Fanatics Extends Partnership With Formula 1
Fanatics reached a multi-year extension to its e-commerce and manufacturing deal with Formula 1. Read more

»Wiley X Breaks Ground At New Headquarters In Frisco
Wiley X broke ground in Frisco, TX, where the protective eyewear brand’s global headquarters, manufacturing and distribution site is set to be located in the Star Business Park by 2022. Read more

»CycleBar To Debut In New York City With Multiple Former Flywheel Locations
Xponential Fitness brand CycleBar will enter the New York City market for the first time with six studios expected to open over the summer, beginning with a studio in Noho in late June. Read more

»PXG Opens Eighth Store
PXG, the golf club maker, announced the opening its eighth U.S. location. The latest, a more than 4,000-square-foot facility in The Shops at Norterra in the company’s home state of Arizona, marks the third PXG store to open in the past 12 months. Read more

»Eagle Creek To End Operations By Late 2021
VF Corp has confirmed plans to cease operations of the Eagle Creek, the travel accessories, luggage and daypack brand, this fall. Read more

»FTI Consulting Projects U.S. Online Retail Sales To Reach $865 Billion in 2021
With an improving economic outlook and accelerating growth of online shopping since the start of the COVID-19 pandemic, the Retail & Consumer Products practice at FTI Consulting, Inc. projects U.S. online retail sales will reach $865 billion in 2021, with nearly two-thirds of Amazon Prime Day shoppers surveyed saying they intend to spend more during this year’s event than they did in 2020. Read more

»Adidas Partners With Delta Galil
Adidas announced a global licensing agreement that will see Delta Galil design, manufacture and distribute men’s and women’s underwear collections under Adidas’ Badge of Sport and Originals labels. Launching for Spring 2022, the collections will be available in the APAC, EMEA, Europe and Latin America regions, with the women’s collections also launching in North America. Read more

»WIT Fitness Announces Global Partnership With CrossFit
London-based sportswear retailer WIT Fitness and CrossFit, LLC have signed a multi-year global e-commerce and retail partnership in which WIT will operate an official online CrossFit store, sell CrossFit-branded gear at its flagship London store and future physical locations globally, and have a retail presence at the CrossFit Games and other CrossFit events. Read more