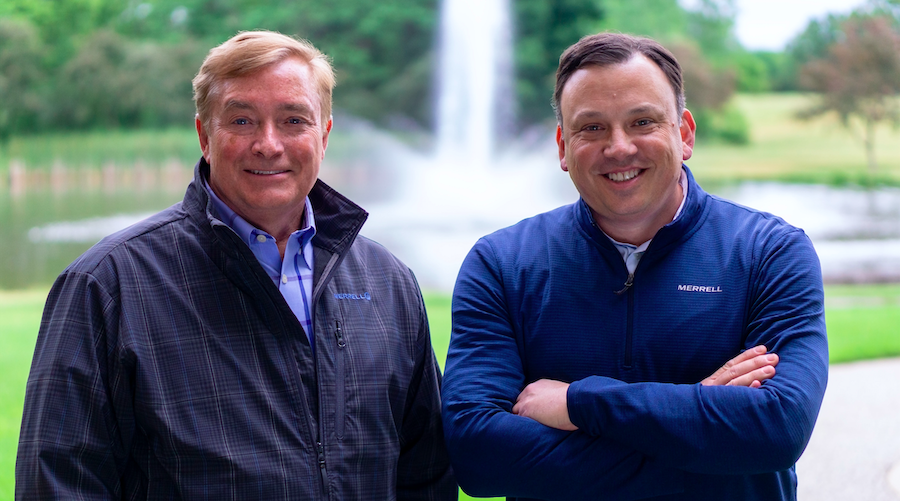 Wolverine World Wide Inc. has named Brendan Hoffman, currently company president and a member of WWW’s Board of Directors, to succeed Blake Krueger, as chief executive officer at the end of the year.

As part of the transition, Krueger, who began his career with the company in 1993 and has been CEO since 2007 and chairman of the board since 2009, will assume the newly created role of executive chairman of Wolverine Worldwide.

Hoffman joined Wolverine Worldwide as president in September 2020 with a plan to become CEO. He had oversight of the company’s brands and direct-to-consumer business, reporting directly to Krueger. Hoffman’s initial focus had been to pursue growth initiatives across its brands and digital operations, with one of his primary objectives driving the company’s e-commerce revenue goal of $500 million for 2021, doubling 2019 levels. Over the past nine months, Krueger and Hoffman have worked to leverage the global power of the company’s portfolio, navigate the impacts of COVID-19 and strategically position the company and its brands for accelerated post-pandemic growth and continued long-term success.

“I would like to thank Blake and the Board for their support and the opportunity to lead Wolverine Worldwide into its next phase of global growth,” said Hoffman. “It’s been a privilege to work closely with Blake over the past year and I have gained tremendous knowledge of the industry and the unique strengths of the company’s global brand portfolio. Blake has truly transformed the company during his tenure, and it is an honor to be entrusted with building on this incredible foundation, working with an industry-leading team, and capitalizing on the many opportunities ahead for Wolverine Worldwide. I look forward to continuing our partnership as we step into our new roles.”

Before joining Wolverine Worldwide, Hoffman was CEO of Vince Holding Corp., a publicly traded, global contemporary fashion brand. While at Vince, he increased the growth and penetration of the company’s e-commerce and digital platforms, adapted its vertical supply chain to embrace “buy now/wear now” trends and extended the brand into new consumer categories. Prior to joining Vince in 2015, Hoffman was CEO and president of The Bon-Ton Stores, Inc. and president and CEO of Lord & Taylor LLC. In addition, he was CEO and president of Neiman Marcus Direct earlier in his career, helping to grow Neimanmarcus.com and launch Bergdorfgoodman.com.

Under Krueger’s leadership as CEO, Wolverine Worldwide has transformed from a traditional footwear wholesaler into a consumer-obsessed, digitally-focused growth company with one of the world’s largest portfolios of footwear and lifestyle brands. He led the company’s acquisitions of the Merrell, Saucony, Sperry, Stride Rite, Keds, and Chaco brands, opening up new market segments and consumer territories. During his tenure, the company expanded its international distribution to more than 170 countries and territories, increased revenue to over $2 billion and market capitalization by 30-fold and grew the brand portfolio into a global industry-leading powerhouse.

As executive chairman, Krueger will continue to lead WWW’s Board of Directors and will partner with Hoffman on key international and strategic initiatives.

“Blake has been a leader in the footwear industry for almost three decades, and it’s been an honor to work closely with him and the Wolverine Worldwide team during his tenure,” said David T. Kollat, lead independent director for Wolverine Worldwide since 2007 and a Director since 1992. “On behalf of the Board, I want to thank Blake for his passion, dedication, and exceptional leadership as CEO of Wolverine Worldwide. We will continue to benefit from his expertise and experience in his new role as Executive Chairman, and we are grateful for his work in preparing for a smooth CEO transition.” Kollat continued, “In his time with the company, Brendan has proven to be an impactful leader with a strong understanding of our most significant opportunities in the global marketplace, and we believe the company is well-positioned for continued success under his leadership.”

Krueger noted: “It has been an honor and privilege to serve Wolverine Worldwide for the past 28 years, working with and helping to build an amazing and impactful global team, brand portfolio, and footwear and lifestyle mainstay. I look forward to continuing my work with Wolverine Worldwide and the Board in my new role as Executive Chairman. I am confident that the company is in great hands and will have continued growth as Brendan takes over as the new CEO.”