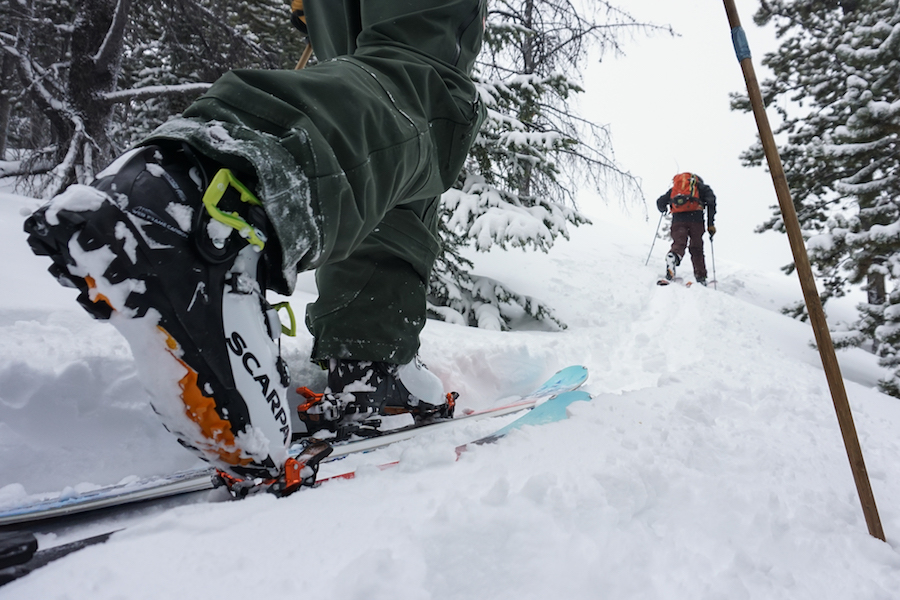 Author’s note: This is another article in an occasional series on the Business of Snow. Look for at least one more story before the ski season winds down—the last run, so to speak—on how industry stakeholders are working to increase snow sports participation.

For the casual onlooker, noticing an increase in skiers taking the uphill track at a resort or seeing an overcrowded parking area near an out-of-bounds ski trail might provide anecdotal evidence that more people want to “earn their turns.”

But the data backs up an industry trend that shows no sign of stopping: The backcountry ski business is booming.

Sales of backcountry gear (skis, boots, bindings and skins) grew 6.1 percent in 2018, which may not sound astronomical at first glance, but that was against an especially strong comp year as those same product categories improved 9.1 percent in 2017 from the previous year, according to SSI Data.

The recent Outdoor Retailer Snow Show provided further proof that backcountry skiing is gaining in popularity, as many brands exhibiting at the event were eager to showcase their newest crop of alpine touring (AT) skis, splitboards, boots, bindings and skins, all in hopes of meeting rapidly growing market demands.

For example, more skiers are looking for a boot they can use on- or off-piste, according to Geoff Curtis, VP of marketing for Marker/Dalbello/Volkl.

“There is a lot of interest in products that have the capability of touring,” Curtis told SGB at the show. “Customers want an everyday high-performance ski boot that works well at the resort and in the backcountry.”

The backcountry boom has clearly influenced how traditional alpine ski manufacturers are making gear for the retail channel, according to Teddy Schiavoni, chairman of the National Ski & Snowboard Retailers Association and owner of Summit Ski and Snowboard Shop in Massachusetts.

As Schiavoni told SGB recently, a number of suppliers are introducing backcountry and sidecountry products, while AT technologies such as lighter weight boots, lighter weight and versatile ski designs, and universal binding technology are “trickling into more conventional alpine equipment,” he said, “And that’s been a benefit to consumers.”

Granted, AT skiers and splitboarders still compose only a fraction of the snow sports world in comparison to alpine skiing and snowboarding, according to Snowsports Industries America’s latest participation report. The 2017-18 season saw just 704,000 alpine touring and 683,000 splitboarding participants, compared with 15.3 million alpine skiers and 14.7 million snowboarders.

But, as Miller pointed out, what was once a niche sport is now exploding, and brands are responding to customers’ demands for an array of light, technical and reliable gear that allows them to free their heels on the uphill and lock them down on the descent.

“There are new players coming to the sport, whether it’s from the supplier side or from the consumer side,” Miller told SGB Media at the show. “Back in the day, there were only three or four of us boot guys out there, or more like two or three of us. Today, wow. Walk the aisles here and you’ll see that every alpine company has an alpine touring option, a lot more of the brands are talking about skimo—super light competitive ski mountaineering—and beyond that, people just want to get away from the ski resort. What’s a lift ticket now—$150?”

That last point is an important one. Of the multiple factors driving skiers and snowboarders into touring gear, simple economics appears to top the list.

No one can dispute the exorbitant cost of resort skiing, even as multi-mountain ski passes have made it slightly more affordable. Lift ticket prices are increasing, and plunking down upward of $150 for a day or $600 or higher (much higher in some cases) for a season pass is an investment that many are foregoing in favor of free backcountry terrain.

But another factor for the rise in backcountry gear is less about finances and more about finding a different vibe on a pair of skis or a splitboard, according to Oliver Steffen, founder and CEO of Canadian backcountry gear brand G3. Some outdoor enthusiasts simply want what the lift-accessed slopes can’t deliver.

“They’re looking to expand their experiences,” Steffen told SGB Media at Snow Show. “It really is all about that. They want to go a little farther. They want to they want to go to that ridge that they’ve seen from the lift for a couple seasons. And now it’s quite acceptable to be standing in the lift line with a pin binding on. Ten years ago, you were kind of the odd person.”

Gear that allows for backcountry skiing or alpine touring or uphilling or skinning—whatever term someone uses—has indeed become mainstream, and nowhere is that more evident than at, surprisingly, ski resorts.

While the vast majority of resort skiers and snowboarders hop on a chairlift that whisks them up the mountain in a matter of minutes, many ski areas are providing an in-bounds uphill track that allows for a slower but more enjoyable, and certainly more aerobic, ascent.

Adrienne Isaac, director of marketing and communications for the National Ski Areas Association, told SGB that according to the 2017/18 Kottke National End-of-Season Survey, 50 percent of responding resorts allowed uphill access.

“Of that, 7 percent allow it on an unlimited basis and 43 percent offered it on a limited basis (subject to specific times or routes, etc.),” Isaac said in an email response. “Of the responding resorts who do allow uphill access, 52 percent require some sort of paid ticket or pass to do so.”

Isaac, who lives and works in Colorado, offered some additional anecdotal evidence for the increase in uphill access. As she sees it, people are earning their turns at a resort or in the backcountry for a variety of reasons.

“The users vary from hardcore endurance athletes to people simply enjoy some quiet time on the slopes before the lifts start turning,” she said, adding that some ski areas offer uphill events. “It seems that the uphill and backcountry trends tend to be more popular in the West, although there are mountains out East that allow uphill access and are also engaging their skinners and hikers.”

Another beneficiary of the backcountry boom is the small but fiercely proud telemark industry. Rumors of telemarking’s death have been greatly exaggerated, according to 22 Designs co-founder Collins Pringle, and the renewed focus on uphilling, especially at resorts, has given free-heelers new life.

What is still a niche sport has stabilized after some correction over the last few years, Pringle said, and the rise of backcountry and in-bounds uphill access has been a boon for the telemark-specific companies that stayed in the game.

“People tele’d to go into the backcountry, but they were alpine skiers at heart,” Pringle said, another reason that AT gear sales have been hot. “Telemark skiing was down four or five years ago when Black Diamond and G3 dropped out, but we’ve been growing significantly. It’s been up quite a bit this year and we actually sold out.”

With the surge of people venturing into the backcountry, safety is at the forefront of anyone looking to go off-piste. Just this week, avalanches claimed lives in Colorado, and the risks associated with backcountry skiing are making national news, including recent reports from ABC and The New York Times.

So as brands try to get increase gear sales, they’re also working to address safety concerns. G3, for example, created G3 University, a series of videos and blogs to help backcountry explorers with anything they might need for an off-piste adventure, from trip planning and safety tips to gear selection and gear care.

Steffen told SGB for an article last year that the company didn’t design G3U as a substitute for proper training from professionals, but rather to offer tips on how to tackle backcountry exploration and to raise awareness of the need for proper backcountry education.

“We are just making that more of an open platform where anyone can learn how to be a better backcountry traveler and realize the value of getting educated, hiring a guide or simply trying new things,” he said. “Nothing in G3U is meant to replace proper backcountry training and education in the field with professional instructors. Instead, it is meant to whet the viewer’s appetite for this stuff and get them excited about that next level of training.”

As the backcountry trend continues, safety will, of course, be top of mind for any company hoping to tap into the growing demand.

But ski brands—those focused primarily on the traditional alpine discipline as well as those already thriving with touring gear—are also laser-focused on making innovative backcountry gear for a market that hasn’t come close to reaching its peak.

“Nowadays, backcountry gear is just everywhere,” Steffen said. “We’re past that early hurdle, past the early adopters. Now it’s become so much more mainstream to have a backpack and a binding that flips up. We really see the people who get a chance to try touring, just a taste of it, on any brand. They like it and they go OK, ‘I’ve got to get some better gear.’ We like to be there for them.”