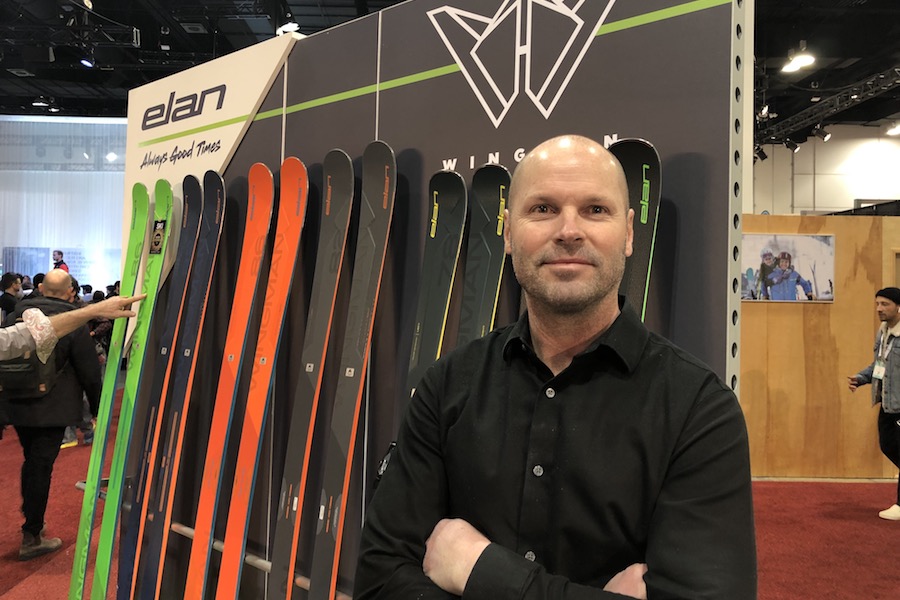 Author’s note: A few days after this article was published, Mechura was named president and CEO of Elan Sports USA. Read our coverage by clicking here.

2018 was a milestone year for Elan Skis, kickstarted in April by the formation of Elan Sports USA to help the company build on recent momentum in the U.S. and better control distribution here.

That strategic move paid off for the Slovenia-based ski manufacturer as sales grew 20 percent in North America, helping this market surpass Europe as the company’s largest.

Not only is North America now number one for Elan in terms of existing sales, but it also represents the largest growth opportunity for the brand, said Jeff Mechura, who is based in Seattle, WA, but is head of global brand development and marketing.

Mechura spoke with SGB on day one of Outdoor Retailer Snow Show in Denver, CO, where he dished on everything from what’s been driving growth at Elan to the impact of a successful rebranding campaign to why Elan wants to remain the “good Catholic boys” when it comes to sales channels.

Digging into Elan’s growth in the U.S. begins with its traditional strengths—the rental market and skis that fall within the first and second price points. Mechura, who formerly worked at K2, said Elan for years had banked on a reputation for those focus areas and had been known in the industry as a “very interesting company that makes a great product, delivers on time and has the best margins in the business by far.”

So the company rebranded three years ago, and that shift in messaging and marketing put Elan on an upward trajectory.

“We’ve really focused on who we are, what we do and how we’re going to do it,” Mechura said. “Not to disregard any of the innovation and any of the long history of manufacturing for 75 years in the Alps—that is the foundation of the business—but it was taking that next step in creating a brand and not just a ski company. The most important thing we did was identify who our customer was, and that was a customer that we felt was being just drastically ignored in this building.”

“This building,” meaning the Colorado Convention Center, where Snow Show exhibitors and attendees sometimes place too much emphasis on the “120 millimeter-underfoot, super rocker, powder ski designed for heli-skiing in Alaska,” Mechura specified.

Targeting the right customer with the right product is the holy grail for any brand, and Elan knew that skis designed only for tackling deep powder days or steep couloirs wouldn’t get the company where it needed to be.

Granted, Mechura added, Elan makes product for biggest of big mountain skiers (including some in its Ripstick line), but the emphasis shifted away from the 1 percenters who want to drop crazy lines in Alaska and toward those who simply want to teach their kids to ski or lap some groomers at the local hill.

“We’re talking to the other 99 percent of skiers who are actually walking into ski shops and buying skis,” Mechura said. “That’s where the growth is. Speaking the language of the consumer is super important. A lot of them don’t know what’s in their BMW M5 engine and they don’t really care; they just know that it goes fast and gets them where they want to be in style. We’re really tapping into simple stories, a simple product line, and making something that’s identifiable and approachable. If you look at all of our communications, all of our photography, this is stuff that people can see themselves doing.”

That approach centers on Elan’s tagline, “Always Good Times.” As Mechura and Elan’s PR manager, MJ Carroll, pointed out, everyone has a different definition of a good time. So Elan wanted to make sure it covered everyone’s version by offering a product to match. And uncovering the necessary insights and intelligence behind customer demands proved to be easy, Mechura said.

“You don’t want to go to your retailers and say, ‘Hey who are we?’ You actually want to take a leadership position,” he said. “A lot of it is instincts. A lot of it is the experience that we have, and frankly, our rep force is all industry veterans. We don’t do a lot of focus groups. We take a connected group of people and make a decision. This was kind of a no-brainer story.”

One marketing plan to share that story with its target audience involves the company’s most iconic and instantly recognizable ambassador, Glen Plake. The Mohawked Plake and his wife, Kimberly, spent December and January on another Down Home Tour, an unscheduled trip to small ski areas throughout the Midwest, Mid-Atlantic and New England, where he skied with locals and further stoked their passion for skiing.

“He’s skiing with real people and we couldn’t be prouder of him,” Mechura said. “It’s about connecting with real skiers.”

Connecting with skiers is a clear focus for Elan, but, like with most European brands, that can be a challenge for growing mind share in a market where many can’t locate Slovenia on a map. However, Elan’s reputation as a “legacy brand” meant that it had an advantage over, say, a new entrant to this market.

Innovation was critical, but so was understanding the U.S. market. That’s why the head of brand development and marketing (Mechura) lives here. It’s why the company’s CEO is an American living in Switzerland. And it’s also why Elan expanded its U.S. team last fall.

“We understand the needs of Europeans are much different than the needs of Americans in terms of certain products,” Mechura said. “They capitalized and invested in not only the marketing story but also manpower and making sure that we’re getting everything we need.”

Elan also understands the needs of its specialty dealers, and that’s why the company doesn’t sell direct, Mechura said. “Yes, we’re the good Catholic boys when it comes to the internet,” he said. “We do not sell direct. We’re the ones who say we believe in brick-and-mortar and we’re going to support those channels.”

With a clear focus of who it is and where it’s going, Elan has taken the route of that lap skier who is perfecting a GS turn and working to get better with each run, yet who also is getting excited that après drinks are on the horizon.