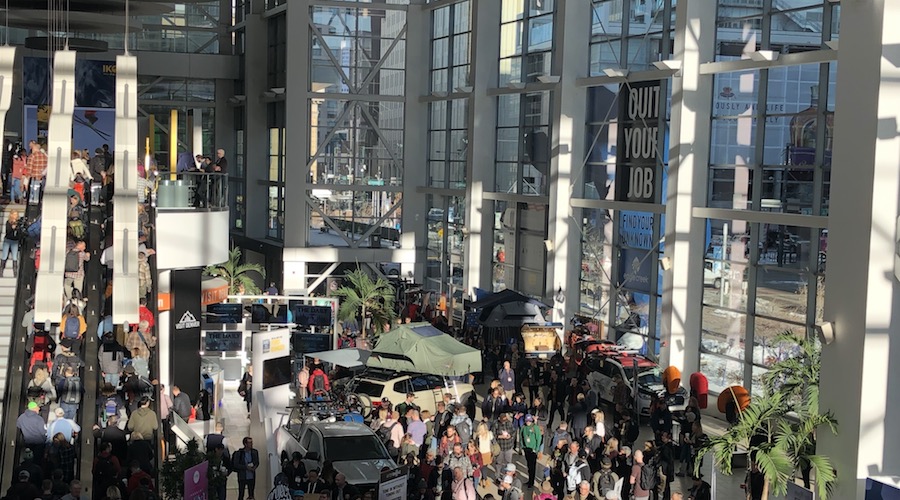 Bolstered by great snowfall across much of the country and upbeat sales numbers across most product categories, the snow sports industry seemed especially buoyant at last week’s Outdoor Retailer Snow Show in Denver, CO, the second since OR bought the event from Snowsports Industries America in 2017.

The mood was positive even before the happy hour beers began flowing, which many attributed to the plethora of powder days that have brought more customers into shops and onto slopes. Thanks to snowy weather coast to coast, plus favorable comps against a soft 2017/18 season, business has been good for brands and retailers alike, as SGB outlined last week in Shared Stoke: Plentiful Snow Equals Strong Sales.

That stoke clearly carried over to the show, which drew 950 exhibitors and 25,000 attendees, Outdoor Retailer PR Manager Lisa Ramsperger told SGB at the media preview the night before the show began.

SGB was at all three days of the event, meeting with dozens of brands, retailers, reps and association personnel to discuss every aspect of the industry. In the coming days and weeks, look for myriad dispatches from SGB, including news from the show (like the industry climate collaboration), dominant category trends (e.g., snowshoeing, backcountry skiing), innovative products and executive Q&As. And we’ll also be digging into the many stumbling blocks and opportunities facing the snow sports industry.

To start, here are five key takeaways from this reporter’s notebook on business news that emerged during the show:

The rising cost of lift tickets coupled with more skiers and snowboarders wanting to earn their turns has resulted in a newfound emphasis on backcountry gear, and the presence of new or improved alpine touring skis, boots and other products such as skins and avalanche safety gear for uphilling was apparent at booths across the show floor.

Kim Miller, CEO of Scarpa North America, whose booth was filled with all manner of AT and telemark boots, said his company is keenly aware that more people are opting away from the lifts and need the right setup of products to accommodate that transition.

“It’s growing and it’s growing quickly,” Miller said of the backcountry boom. “There are new players coming to the sport, whether it’s from the supplier side or from the consumer side. Back in the day, there were only three or four of us boot guys out there, or more like two or three of us. Today, wow. Walk the aisles here and you’ll see that every alpine company has an alpine touring option, a lot more of the brands are talking about skimo—super light competitive ski mountaineering—and beyond that, people just want to get away from the ski resort. What’s a lift ticket now—$150?”

Increased prices at the resort windows has indeed kept many potential skiers and snowboarders out of the lift lines, but other forces are also driving them into the backcountry.

“They’re looking to expand their experiences,” said Oliver Steffen, founder and CEO of G3. “It really is all about that. They want to go a little farther. They want to they want to go to that ridge that they’ve seen from the lift for a couple seasons. And now it’s quite acceptable to be standing in the lift line with pin binding on. Ten years ago, you were kind of the odd person.”

Look for much more on the backcountry boom, including recent sales data and more analysis from industry players, in a future Business of Snow article in SGB Executive.

Of the many Snow Show attendees that SGB spoke with, the format was mostly well received, and the floor traffic was clearly more bustling than November’s Winter Market, though it was lighter than last year’s debut as an OR-owned event (which in turn had been WAY busier than previous SIA shows).

Most said they were happy the trade show portion of Snow Show was only three days instead of four with no weekend dates, as the format had been in years past. However, the On-Snow Demo, set for Monday and Tuesday at Copper Mountain, was problematic for many buyers, who didn’t want—or couldn’t afford—to spend an extra couple of days away from their businesses.

SGB spoke about the new format with SIA COO Maria McNulty, who empathized with the retailers and brands that couldn’t make the demo because they had to get back home.

“Unfortunately, there’s no way we can do the On-Snow Demo over the weekend, so we’re in constant dialogue with OR, and with our constituents and theirs, on how we can improve,” McNulty said. “We would love to see the show shift enough so that the demo can be more continuous with the show. What does that look like? I’m not sure, whether that’s the show going back to the weekend or one weekend day, or whether it needs to be earlier in the week. That’s a conversation that hopefully we’ll find some sort of answer to. Everyone’s aware that it’s tough. It’s definitely not an easy proposition to have people spend an extra two days here.”

SGB Executive will have more on the future of OR shows. Look for comments from Outdoor Retailer’s parent company, Emerald Expositions, when it releases fourth-quarter earnings before the market opens on February 14.

Hope remains that the U.S. and China will find some accord on the now yearlong trade war, but the impact of increased tariffs on goods made in China—a popular manufacturing source for many exhibitors at Snow Show—continues to be top of mind.

“Tariffs have played a bit of a role, specifically with our bottle tops, but it’s still allowing us to be in line with our initial pricing strategy,” she said. “We made a couple tweaks in a few places, but it’s been interesting learning experience, and we’ve been able to lean on some experts. We’re riding it OK. But it seems like it’s a really volatile time and it’s going to be interesting to see what happens in the next six to eight months.”

Brandon Bills, marketing/PR manager for MSR, said his company is among those brands who are being indirectly hurt by the trade war, even though MSR makes its products with U.S. steel. As more companies across all categories (and especially outside the outdoors and sporting goods worlds) compete for the same raw materials, the price of doing business is climbing.

“Tariffs is a pretty interesting story for us,” Bills said. “MSR has been making its products with USA metal for decades, and you might not think we would be feeling the impact of the tariffs because we’re not importing steel. However, as demand for USA steel is going up, we’re feeling a pinch because everybody else is trying to source it domestically from the same places. We’ve been doing this the right way, but now we’re really paying for it, unfortunately.”

SGB will continue following the tariff situation and its impact on the active lifestyle industry.

This is a continuation of a recent trend as hardgoods brands design gear specifically for women. Gone are the days (mostly) of the “pink and shrink it” design approach—a popular phrase to describe how brands have traditionally brought women’s gear to market.

Companies like Nordica understand the need to have a similar variety of product for women as they do for men, said Sam Beck, director of marketing and communications for Nordica USA Corp.

“We’ve definitely we put a highlight on women’s this year with the introduction of a new model, the Santa Ana 88, which we’re relaunching the Santa Ana collection with,” he said. “We’re doing whatever we can to pay attention to the women’s market more than we have in the past. As an industry, we haven’t given the women’s market as much attention as we should, but it makes up more than 40 percent of the market and we have to make sure we’re building a community for women skiers.”

Eye-opening and disappointing developments in the consumer and trade press occurred during the show, but let’s begin with one involving this publication.

SGB Media’s parent company, SportsOneSource LLC (SOS), on January 30 announced The NPD Group had signed an agreement with SOS to acquire assets relating to the company’s SSI Data POS Sports and Outdoor tracking business. The transaction is expected to close on April 1, 2019. SOS will continue to collect data and service clients through March 31, 2019.

Look for SGB Media to ramp up coverage of the active lifestyle industries in the coming months with bigger, broader and better coverage across all SGB Media properties—SGB Today, SGB Update, SGB Executive and SGBonline.com, which reach more than 50,000 daily subscribers.

“While SOS will no longer be in the sports retail data tracking business, we will continue to support the active lifestyle market with critical insight and analysis through our SGB Media publishing business,” said James Hartford, CEO of SportsOneSource, LLC. “The industry will benefit as NPD and SGB Media concentrate on our respective strengths in data and media.”

Meanwhile, Active Interest Media/SNEWS launched The Voice at Snow Show after it lost the contract for the show’s official publication, The Daily, which Outdoor Retailer brought in house.

But perhaps the biggest shock occurred on Thursday when media members from publications owned by TEN: Publishing’s Adventure Sports Network—including Powder, the Transworld titles and Snowboarder—abruptly left the show. Rumors about their departures were soon verified as news of the deal was officially released on Friday.

Layoffs have reportedly already occurred, though SGB hasn’t been able to confirm exactly who has been affected by the move. Stay tuned for updates on this development and further shifts in the rapidly evolving media landscape as publications work to increase their value within the industry.