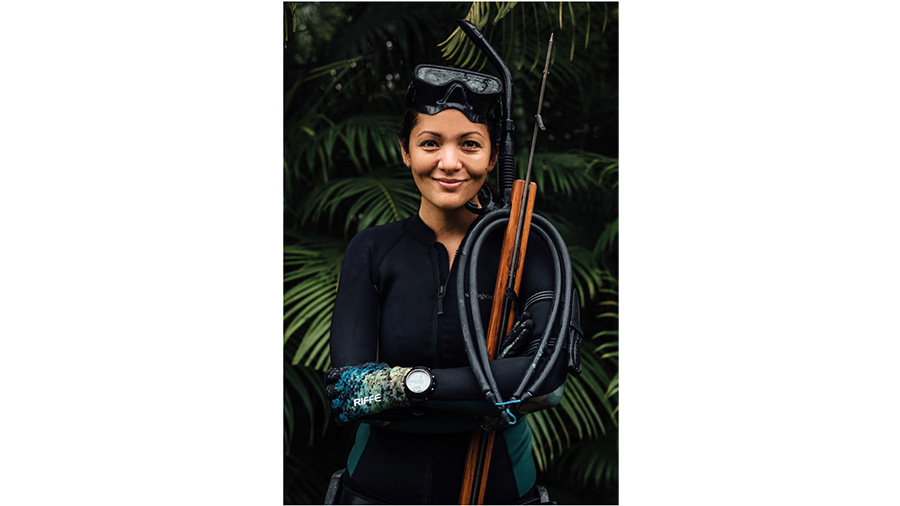 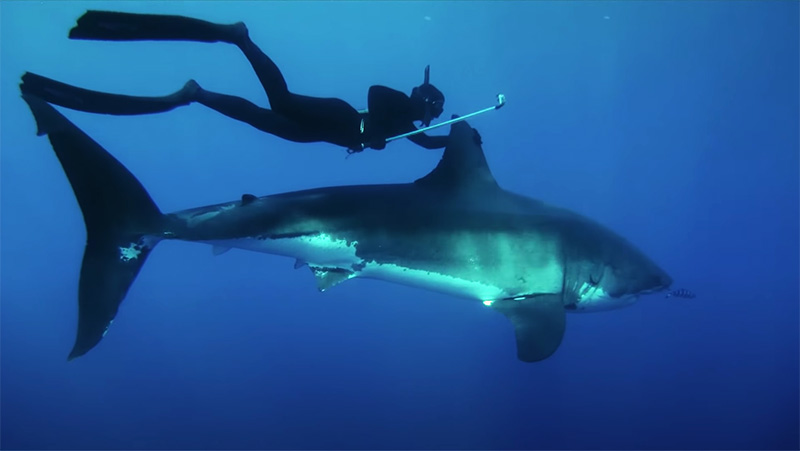 Here, a still shot of Kimi connecting with the dorsal fin of a Great White, the “biggest Great White I had ever seen.” The moment confirmed for her that “we are all so vulnerable and so dependent on one another and that we have to take care of each other.”
To watch the full video click on the photo above, or go here.
For more on Kimi, go here.

»Report: Icebreaker To Undergo Restructuring
Icebreaker plans to eliminate from 40-to-50 jobs in its home country of New Zealand in a reorganization designed to better support global growth, according to the NZ Herald. Read more

»Adidas Lifts Sales Guidance Despite Lockdowns, Supply Chain Issues
Adidas raised its 2021 sales outlook as first-quarter revenues grew 27 percent on a currency-neutral basis and profits returned to near pre-pandemic levels. Across the company’s three strategic markets, currency-neutral sales expanded at a triple-digit rate in Greater China (+156 percent) in the first quarter and increased in the high-single-digits in both North America (+8 percent) and EMEA (+8 percent). Read more

»J.C. Penney Cuts 650 Jobs
J.C. Penney has eliminated about 650 jobs in an effort to adjust “our structure to better meet our strategic priorities,” according to a company statement. The job cuts followed an operational review by new owners Simon Property Group and Brookfield Asset Management. Read more

»Gildan Activewear Sees Q1 Sales Climb 28 Percent
Gildan Activewear Inc. reported a profit against a loss in the first quarter as revenues climbed 28.4 percent. Said Gildan President and CEO, Glenn Chamandy. “While large events have not yet restarted, we continue to be encouraged by the strength of our imprintables business and on the retail side we were pleased with strong double-digit growth in underwear and activewear sales.” Read more

»Royal Robbins To Open Retail Store in Seattle
Royal Robbins has accelerated its retail expansion plans and announced that its first retail store in downtown Seattle would open on May 7. Read more

»Penn Athletics Renews Relationship With Nike
The University of Pennsylvania Division of Recreation and Intercollegiate Athletics and Nike have reached an agreement on a new five-year contract that will keep the Quakers in Nike through the 2025-26 athletic year. Read more

»Report: Adidas Launches Auction For Reebok
Adidas has launched the auction to sell its Reebok brand with the first round of bids to be submitted next week, according to a report from Reuters. Read more

»Peloton Recalls Tread+ And Tread
In a major reversal, Peloton reached an agreement with the U.S. Consumer Product Safety Commission (CPSC) to recall both its Tread+ and Tread treadmills. The recall, involving 126,000 treadmills, came after Peloton defended the treadmills after a child died in an accident linked to a Tread+. Peloton CEO John Foley issued an apology for not cooperating sooner to resolve the issue. Read more

»Berghaus Appoints Global Brand Director
Berghaus has appointed Charlie Pym as its global brand director responsible for global product and marketing for the brand. He joins Berghaus from the cycling category, having been the marketing director of McLaren’s Pro Cycling program, which launched Team Bahrain McLaren. Read more

»Camping World Sees Q1 Revenues Climb 52 Percent
Camping World Holdings Inc. reported a profit against a loss in the first quarter as sales ran up 51.6 percent. The retailer raised its guidance for the year. Read more

»Under Armour To Pay $9 Million To Settle SEC Revenue Probe
Under Armour agreed to pay $9 million in fines as part of a settlement of an investigation by the Securities and Exchange Commission. The case related to misleading its revenue growth to investors from the third quarter of 2015 through the fourth quarter of 2016, the agency said Monday. Read more

»BSN Sports + Under Armour Partner With Delmarva Aces Baseball Organization
The Delmarva Aces baseball organization today announced it had signed an agreement with BSN Sports, a division of Varsity Brands, to outfit its athletes and coaches in Under Armour gear beginning this summer. Read more

»Report: On Exploring Initial Public Offering
On AG, the Swiss running shoe maker, is preparing to go public with a potential U.S. stock market listing as early as this fall, sources told Reuters. The deal reportedly aims to value the firm at about $5 billion. Read more

»Catch Co. Closes $38 Million Series B Funding Round
Catch Co. announced that it had closed a $38 million Series B funding round led by Silicon Valley venture capital firm True Ventures with participation from Chicago-based prior investor TechNexus. To date, the fishing brand, content and commerce platform has raised $56 million in total funding. Read more