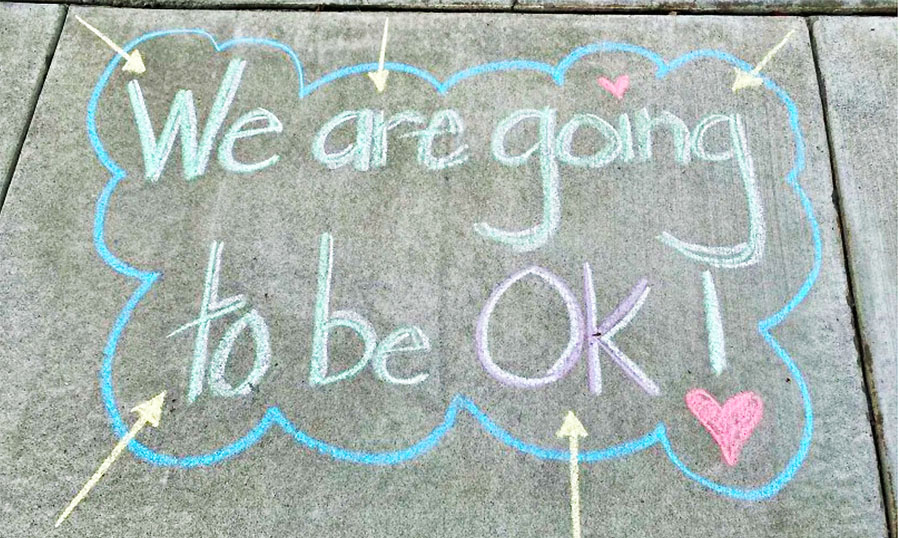 Top National Stories and the Latest Headlines from SGB Updates
across the Active Lifestyle Market during the week of April 13, 2020.

»Delta Apparel Sees Sales Decline In Second Quarter | April 17
Delta Apparel said it expects to see a 6 percent decline in sales in its fiscal second quarter ended March 28. Prior to the March impact of COVID-19, the company was on pace to achieve sales growth of approximately 9 percent for the quarter. Read more

»IHRSA Continues The Fight To Gain Federal Relief For Industry | April 17
IHRSA, the International Health, Racquet & Sportsclub Association, said that since Congress is moving quickly on the next round of stimulus relief, it has bulked up its federal lobbying power to ensure the next package provides relief for all of the country’s 40,000 health and fitness club operators. Read more

»Nordstrom Announces Additional Liquidity And Flexibility Measures | April 16
Nordstrom Inc. announced the amendment of its $800 million revolving line of credit and the closing of its 8.75 percent secured debt offering of $600 million. The company said these actions will provide additional liquidity and flexibility in response to uncertainty related to the novel coronavirus (COVID-19). Read more

»Stage Stores Seeks Vendors’ Support To Skirt Bankruptcy | April 16
Stage Stores Inc. is counting on leeway from vendors to help it avert a bankruptcy filing, according to a report from Reuters. Read more

»Lululemon’s CFO Departs | April 16
Lululemon Athletica Inc. announced that its CFO, Patrick “PJ” Guido, will depart the company, effective May 8, in order to assume a leadership position outside of the apparel industry. Guido joined Lululemon in 2018. Read more

»Gold’s Gym Permanently Closes 30 Gyms | April 16
Gold’s Gym is closing about 30 gyms across the U.S., including all locations in Alabama, St. Louis, and Colorado Springs, CO due to the impact of the novel coronavirus. Read more

»Survey Finds Americans Exercising Slightly More Amid Lockdown | April 1
According to a survey from Piplsay, Americans are exercising and using fitness apps slightly more during the lockdown caused by the pandemic. Read more

»PGA Tour Announces Mid-June Return In Texas | April 16
The PGA Tour announced that it would resume its season in mid-June with a tournament in Fort Worth, TX without spectators. Read more

»USTA Pledges $50 Million To Support U.S. Tennis | April 16
The United States Tennis Association (USTA) is set to commit more than $50 million in spending to support its sport’s ecosystem, over a multi-year, multi-phase plan response to the expected financial impact generated by the coronavirus pandemic. Read more

»Fanatics’ Founder Launches ALL IN Challenge | April 16
Fanatics Founder and Executive Chairman Michael Rubin launched the ALL IN Challenge, which aims to be the largest digital fundraising movement ever with a goal of raising tens of millions of dollars or more to feed those in need during the COVID-19 crisis and beyond. Read more

»VF Corp.’s Dickies Brand To Make 3.4 Million Isolation Gowns For Health Care Workers | April 16
Dickies, in partnership with its parent company, VF Corp., announced that it is further supporting the fight against COVID-19 in the U.S. by manufacturing FDA-compliant isolation gowns for hospitals and healthcare workers. Read more

»GoPro To Lay Off 20 Percent Of Employees In Global Restructuring | April 16
GoPro Inc. announced a strategic re-alignment that includes an accelerated shift to a direct-to-consumer strategy. Actions include a $100 million reduction to 2020 operating expenses including a workforce reduction of more than 20 percent and plans to further reduce non-headcount related operating expenses to $250 million in 2021. Read more

»Academy Sports Furloughs Staff | April 15
Academy Sports + Outdoors announced that it is temporarily furloughing a substantial number of its corporate office and distribution center personnel effective April 18 in response to the impact of COVID-19. This action follows the furlough of a portion of Academy’s store personnel last week. Read more

»LEAD1 Association Tightens Its Belt During COVID-19 Pandemic | April 15
The LEAD1 Association, which represents the athletics directors of the 130-member schools of the Football Bowl Subdivision (FBS), announced a series of initiatives to best prepare for the unknown financial challenges that the FBS now faces due to COVID-19. Read more

»J.C. Penney Skips Interest Payment Amid Bankruptcy Fears | April 15
J.C. Penney said in a regulatory filing that it is considering “strategic alternatives” and has decided not to make a scheduled $12 million interest payment on a 2036 bond. Read more

»Brand Finance Report Sees Significant COVID-19 Impact On Apparel Sector | April 15
Nike retained its title as the world’s most valuable apparel brand, with brand value up 7 percent, according to the Brand Finance Global 500 2020. However, the report found the apparel sector will be among the most affected by the COVID-19 pandemic. Read more

»Skechers’ Animal Welfare Movement Has Raised $5.45 Million | April 15
Skechers has made a donation of more than $509,000 to the Petco Foundation, bringing the company’s total contribution to over $5.45 million for animal welfare agencies. Read more

»Report: J.C. Penney Explores Filing For Bankruptcy | April 15
J.C. Penney Co. Inc. is exploring filing for bankruptcy as the pandemic has sidetracked its turnaround plans, according to a report in Reuters. Read more

»Under Armour Names Lisa Collier As Chief Product Officer | April 15
Under Armour Inc. announced the appointment of Lisa Collier as chief product officer. Collier joins Under Armour after leading NYDJ (Not Your Daughter’s Jeans) as President and CEO from 2016/19. Prior to joining NYDJ, she held numerous positions over her 13-year career with Levi’s Strauss & Co. Read more

»Caleres Expands Liquidity Position | April 14
Caleres announced it has exercised a portion of the accordion feature on its asset-based revolving credit facility. The exercise increases the available borrowing capacity under the facility by $100 million to a total of $600 million. Read more

»Varsity Brands’ Debt Ratings Outlook Lowered | April 14
Moody’s Investors Service said it reduced its debt rating outlook on Varsity Brands, the parent of Varsity Spirit, Herff Jones and BSN Sports, to negative from stable. The rating agency said the change reflects the company’s high financial leverage amid school closures across the U.S. in response to the coronavirus pandemic and the uncertainty around the duration of the outbreak and pace of re-openings once the pandemic subsides. Read more

»Dick’s Seeing ‘Significant’ Traffic Decline Due To COVID-19 | April 14
In an update on the impact of COVID-19, Dick’s Sporting Goods Inc. said it has seen a “significant reduction in customer traffic and demand” since March 10 resulting from the continued spread of COVID-19, although online growth has accelerated. The retailer also said with moves to bolster its cash position and expand its borrowing capacity, it will “be able to continue operations for several months, even with stores remaining closed.” Read more

»Adidas Approved For $3.3 Billion Loan From German Government | April 14
Following the severe impact on its business from the coronavirus pandemic, Adidas on Tuesday received approval from the German government to participate in KfW, Germany’s state-owned development bank. The company will receive €3 billion (US$3.3 billion) at customary market conditions to bridge this unprecedented situation. Read more

»Fitbit To Study The Role Of Wearables to Detect, Track And Contain Infectious Diseases | April 14
Fitbit is collaborating with The Scripps Research Institute and Stanford Medicine on research aimed at using Fitbit data to help detect, track and contain infectious diseases like COVID-19. Read more

»Hanesbrands Debt Rating Outlook Lowered | April 13
S&P Global Ratings revised its outlook on Hanesbrands Inc., the parent of Champion, to negative from stable. The rating agency said Hanesbrands will face significant sales and profitability declines in the upcoming quarters due to store closures and a drop in consumer spending on nonessential items arising from COVID-19 and resulting in an economic recession. Read more

»NSSF: Firearm Industry Economic Impact Soars | April 13
The total economic impact of the firearm and ammunition industry in the U.S. increased from $19.1 billion in 2008 to $60 billion in 2019, a 213 percent increase, according to a report released April 13 by the National Shooting Sports Foundation (NSSF). Read more

»Survey: Americans Apprehensive About Returning To Gym | April 13
A new survey from Morning Consult finds 21 percent of Americans do not expect to feel comfortable going back to a gym for at least six months. Another 41 percent were not sure when they would feel comfortable, or offered no opinion. Read more

»Burlington Stores Furloughs Nearly All Store And Distribution Center Workers | April 13
Burlington Stores Inc. said Monday that it has furloughed nearly all of its store associates and distribution center employees. Burlington’s CEO, Michael O’Sullivan, will not take a salary, the company’s Board of Directors will forfeit their cash compensation, and the company’s executive leadership team has voluntarily agreed to decrease their salary by 50 percent. Read more

Lead photo and below:  Chalk art is sweeping the nation! All over the U.S. kids (and adults) have discovered a way to help one another battle the isolation of COVID-19 , and spread positives messages, on their sidewalks with a simple piece of chalk.  Small reassuring messages tell us we will be o.k. 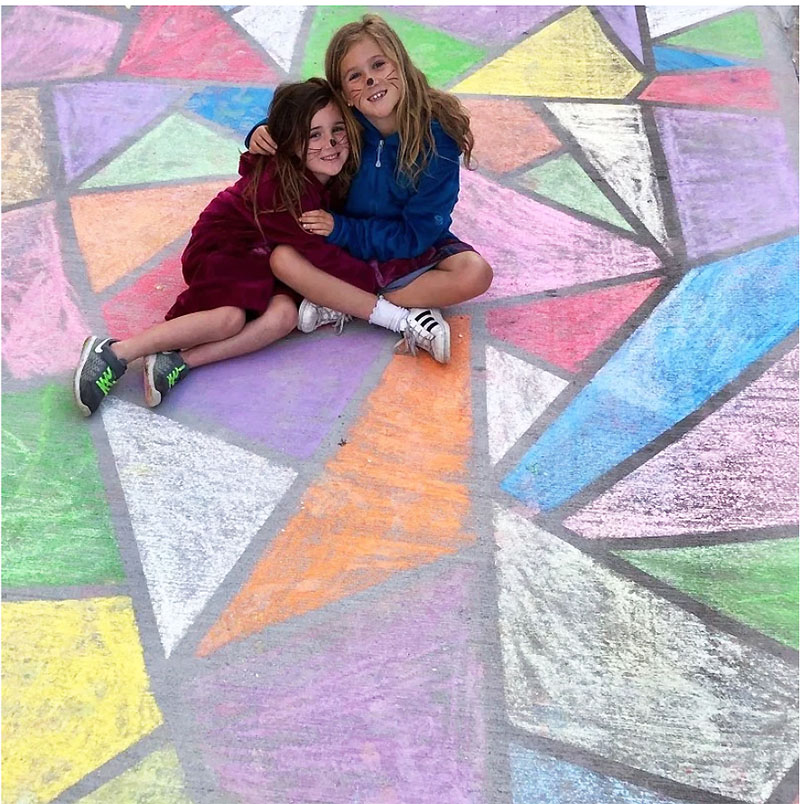 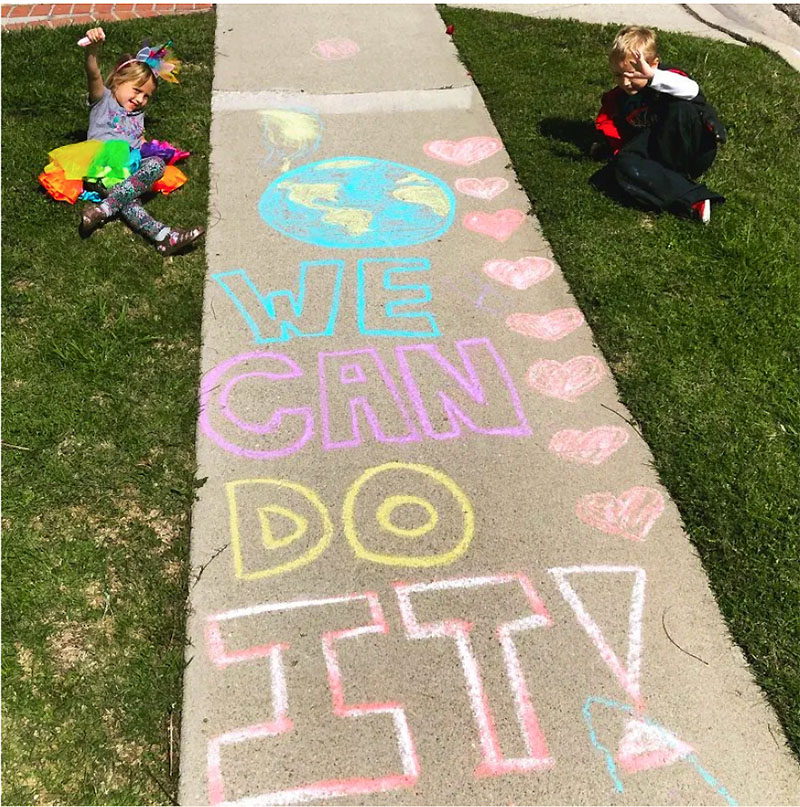 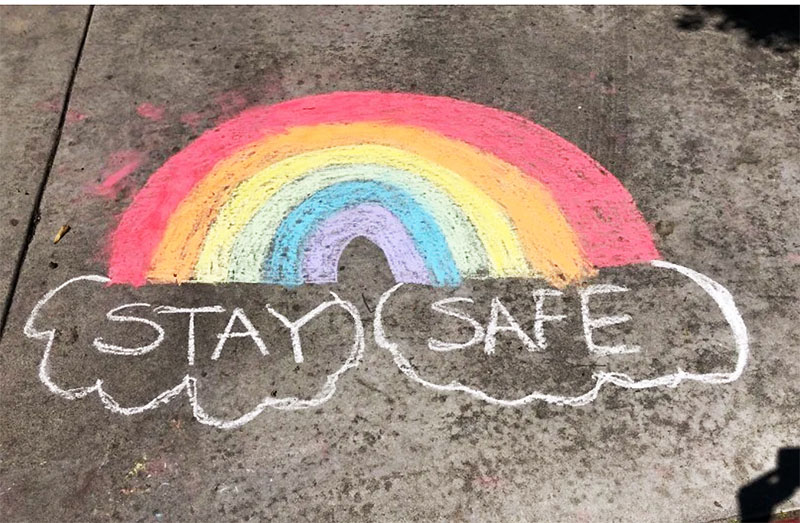