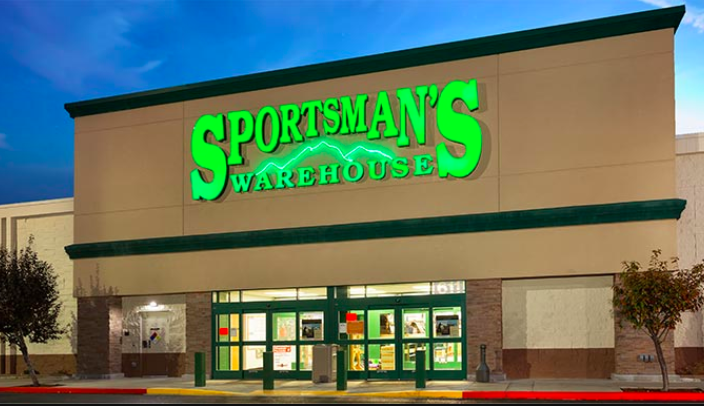 Although Sportsman Warehouse Holdings Inc.’s fourth quarter net income was “impacted by an elevated promotional backdrop and a tax-reform-driven investment in our associates,” the company is poised to gain market share in firearms as its competitors scale back in that category, CEO Jon Barker told analysts on Wednesday evening’s earnings call.

“… Various decisions made by our competitors with respect to firearms and their ongoing operations within the firearms industry … (are) having an impact on our business,” Barker said on the call, which marked roughly the one-year anniversary of his tenure as CEO.

Some of those decisions include:

But “firearm units on a same-store sales basis were up 3.2 percent as we continue to gain market share in the states where we serve,” Barker said. “Firearm revenue declined 2.5 percent on a same-store sales basis for the fourth quarter, a continued sequential improvement from the second and third quarters, as we have now anniversaried the significant runoffs of 2016.”

The results come as firearms sales are down nationwide, the result of what many analysts are now calling the “Trump Slump.” The election of Donald Trump hurt sales because many gun owners don’t feel as though their second amendment rights are in jeopardy, which–in their view–they might have been had Hillary Clinton won the White House in 2016.

The slump is more of a market correction, according to Brian Rafn, a gun industry analyst with Morgan-Dempsey Capital Management, LLC, who pointed out that the surge of gun sales during Barack Obama’s presidency was bound to “come back down to earth.”

“From 1945 to about 9/11 (2001), the gun industry was a 3-million-to-6-million-unit-per-year business in the United States,” Rafn told SGB Executive earlier this week. “We went from a 3-million-to-6-million-unit-per-year business to 16, 17, 18 million units per year. It was triple the post-World War II high. We have an absolute motherlode of guns. … You’re seeing some rationalization in supply.”

“We’re currently evaluating whether this is a pull-forward demand or if it’s an increase in market share,” Barker said. “So we have been cautious with respect to our full-year guidance, but our first quarter guidance is based upon what we’ve seen thus far, and it primarily has been led by firearms, but it is also lifting the rest of the business and we’re seeing good results in other categories as well as more and more people coming into the stores and shopping us online.”

Other factors are at play as firearms manufacturer are feeling the effects of a slowdown in firearms sales along with negative news such as gun violence and nationwide demonstrations calling for increased gun control. Recent examples of manufacturer woes include:

The Remington bankruptcy came up in the earnings call, with one analyst asking Barker if the manufacturer’s financial problems would impact Sportsman’s Warehouse from an inventory standpoint.

“We been in discussion with to make sure [if] there’s any breaks in the supply chain, they’re more than filled,” Barker said. “And we’ve had a very positive and encouraging conversation so far regarding that.”

Even if the headwinds prevail, Sportsman’s Warehouse isn’t daunted. Barker said the company expects “more stable performance in firearms, as we believe the industry is establishing a baseline after a few years of volatility.”

The company is also bullish on its burgeoning e-commerce presence. During 2017 it grew revenue driven from the website by 81 percent over fiscal year 2016.

“On the e-commerce side, we know, we can do a far better job bringing to life our unique in-store retail experience when customers engage with our brand online regardless of their location or device used. This is our focus as we develop a more engaging and easy-to-use front-end experience,” Barker said.

“Customer feedback is confirmed thus in 2017 and we are utilizing these learnings in our go-forward plans for 2018 and beyond. As such, we will continue to make prudent investment in our e-commerce systems and infrastructure in 2018 to support our omnichannel strategy.”