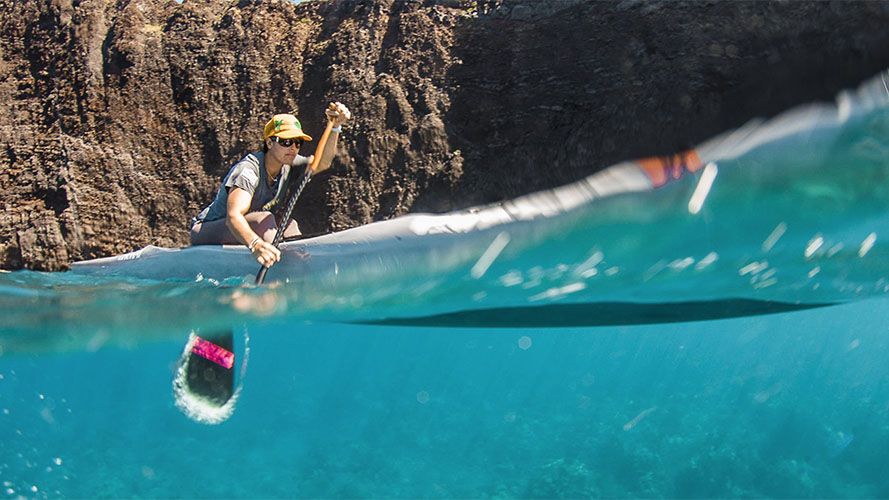 This week’s Ambassador Athlete is Lauren Spaulding
Yeti sponsored athlete, Mother and
“breaking records in Hawaiian open-ocean paddling, qualifying for, and competing in the Olympics.

Open-ocean paddler and self-appointed rodeo mom, Lauren Spalding has a “trust and believe” mentality. Up for all challenges that come her way from ocean waves to weekends at the rodeo with her family.
Get to know Lauren here.

»Yue Yuen Sees 27 Percent Sales Gain In First Quarter
Yue Yuen recorded revenue of $2,493.3 million in the three months ended March 31, 2021, representing an increase of 26.6 percent compared to revenue of $1,969.5 million in the same period of 2020. The increase in revenue was attributable to increased orders amidst the ongoing recovery of global demand for the Group’s products and an increase in production efficiency, on top of a low-base effect due to the COVID-19 pandemic in 2020. Read more

»Dillard’s Sales Rebound In First Quarter
Dillard’s, Inc. reported a profit against a loss in the first quarter ended May 1 as sales surged 73 percent against the pandemic-depressed year-ago quarter. Read more

»Nike To Require Headquarter Employees To Work Three Days A Week In Office
Nike will require employees in its U.S. headquarters in Beaverton, OR work three days a week in the office, with the option to work up to two full days remotely. Read more

»Lodging At Southeast Destinations Continues Recent Momentum
Once again, in contrast with destination lodging around the U.S., the Southeast region is barreling into the third month of the six-month summer season with exceptional performance when compared to last year’s pandemic season and well ahead of the summer of 2019, which posted records for occupancy and rates, according to DestiMetrics, a division of Inntopia. Read more

»Fanatics Partners With The Phoenix Suns
Fanatics reached a long-term partnership to operate online and mobile commerce at shop.suns.com for the Phoenix Suns. Fanatics will also run its retail experiences at Phoenix Suns Arena for the Suns, WNBA’s Phoenix Mercury and other events hosted at the venue following the conclusion of the current NBA season. Read more

»Sequential Brands Secures Further Waivers From Lenders
Sequential Brands was granted a waiver that extends existing defaults on its credit agreement until June 7, according to a filing with the Securities & Exchange Commission. Read more

»Rapala USA President To Retire
Tom Mackin, president of Rapala USA and executive vice president of distribution and brands in North America for Rapala VMC Corporation, will retire from the company on December 31, 2021. Read more

»Champion Aiming To Become $3 Billion Brand By 2024
HanesBrands Inc. unveiled Full Potential, a three-year growth plan designed to drive approximately $1.2 billion in incremental revenue and expand operating margins to 14.3 percent by 2024. The plan calls for Champion to become a $3 billion global brand by 2024, up from projected 2021 sales of approximately $2 billion. Read more

»Academy Sports Appoints Board Member
Academy Sports and Outdoors Inc. announced the appointments of Beryl B. Raff to its Board of Directors and Compensation Committee and Wendy A. Beck, currently a member of the Board and its Audit Committee, as a member and chairperson of the Nominating & Governance Committee. Read more

»Centric Brands Adds To Leadership Team And Board Of Directors
Centric Brands LLC  announced the addition of two new roles at the company. Sid Keswani joins as president, and Ruth Hartman joins the company’s Board of Directors. Read more

»Clarus Nominates Board Member
Clarus Corporation announced the nomination of Susan Ottmann to its Board of Directors. Read more

»Retail Cargo Imports Set New Record As Economy Recovers
Imports at retail container ports hit a new record this spring and volume during the first half of 2021 is expected to be a third higher than last year as the economy continues to recover from the pandemic, according to the monthly Global Port Tracker report released by the National Retail Federation. Read more

»JD Sports Announces Board Change
JD Sports Fashion Plc announced that Andy Rubin has stepped down from the Board as a Non-Executive Director, effective May 6. Andy Rubin will be replaced by Andy Long, former CEO of Pentland Brands. Read more