Add Clarus Corp. to the growing list of beneficiaries of the record-setting 2018/19 ski and snowboard season.

Historic snowfall led to the fourth-highest number of skier visits at resorts across the U.S., according to the National Ski Areas Association, and it fueled winter sports enthusiasts to buy more products from brands like Clarus’ flagship, Black Diamond Equipment.

Salt Lake City, UT-based Clarus notched sales for the first quarter ended March 31 of $61.2 million, up 15 percent from the year-ago period and ahead of Wall Street’s estimates by $3.3 million. On a constant currency basis, total sales were up 16 percent. The strong quarter was driven by 16 percent growth at Black Diamond and 7 percent growth at Sierra Bullets.

On Monday’s earnings conference call with analysts, John Walbrecht, president of both Clarus and Black Diamond, credited the “favorable winter weather that extended late into the season in both the U.S. and in Europe, which drove 49 percent year-over-year growth in our ski category.”

But good snow wasn’t the only tailwind for Black Diamond, he added.

“I think it was a good winter, but I don’t leave it all up to the winter,” Walbrecht said. “Our team developed some award-winning innovative products, both in snow safety packs as well as in beacons and we saw growth in that, likewise in ski and gloves and other categories.

“[Sales growth] continued throughout the first quarter as we saw increased demand and consumer willingness to wait for the new products,” he continued. “Additionally, as we expected, there was pent-up demand for the Black Diamond Beacons, which we began shipping in the first quarter and have been well received both [by] our retail partners as well as our end consumers.”

The epic winter brought powder days to regions across the country, benefiting Black Diamond and anyone else catering to the ski and snowboard industry, but Walbrecht said good snow was the only reason for Black Diamond’s strong quarter. The company has continued to push innovation across its product categories, which has allowed it to take share.

And Walbrecht told analysts he believes the company will continue to differentiate with product in both fall 2019 and spring 2020 seasons.

“For both seasons, we’re doubling down on those categories where we believe there is a significant runway for growth and an opportunity to grow our market share,” he said. “These include footwear, apparel, gloves, trekking poles, packs, amongst others. For fall 2019, we expect to have over 150 new products slated for launch and for spring 2020, we will continue this momentum with another 125-plus slated for launch.”

Looking more deeply at Black Diamond’s Q1, the brand’s apparel sales grew 18 percent behind continued strong demand for bottoms logo wear and sportswear, Walbrecht said, and that was against a tough comp with last year’s introduction of its Stretch rainwear line.

“That said, we continue to see positive, strong momentum across the offering of apparel and remains one of our fastest growing categories with what we believe is still a significant runway for continued long term growth,” Walbrecht said.

Black Diamond’s mountain business grew 12 percent due to strength in gloves, lighting and packs. The brand’s “mountain business continues to be an area of strategic focus, where we believe we are under-penetrated from both a product and a distribution standpoint on a global basis,” Walbrecht said. “Given the large addressable markets for each of these product categories, we are encouraged by the continued strong performance and only see further opportunity to grow our share.”

Another factor in Clarus’ strong quarter was managing costs. Selling, general and administrative (SG&A) expenses in the first quarter were $17.6 million, up slightly from $17.1 million in the year-ago quarter, but as a percentage of sales, SG&A expenses declined 350 basis points to 28.7 percent.

The company said it continued to focus on the re-allocation and scaling of those SG&A expenses to drive strong brand growth and allow it to strategically allocate investments into demand creation and product innovation within Black Diamond and Sierra.

“Our financial discipline has allowed us to reinvest in our brands to drive increased product innovation, higher levels of brand awareness and demand, all of which we believe strongly position us for the long term,” Walbrecht said.

The combination of that financial discipline and the aforementioned innovation led analysts to praise the company’s Q1 performance.

For example, Michael Kawamoto of D.A. Davidson & Co. cited the company’s broad-based growth in his note to investors: “Innovation-fueled growth story continues to build on its impressive track record,” he wrote. “CLAR kicked off 2019 with growth across all of its brands, and in every category, geography and channel. Additionally, the company has numerous exciting products ramping up across its brand portfolio, giving us confidence that CLAR’s impressive trajectory can be maintained. We see the potential for shares to outperform as the company continues to scale, generating additional operating leverage, and estimates move higher.”

And 1 Partners with High Life Apparel 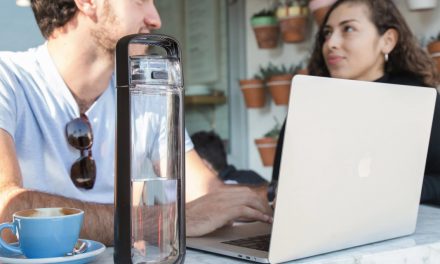 The Weekender … Stay Hydrated, Save The Planet