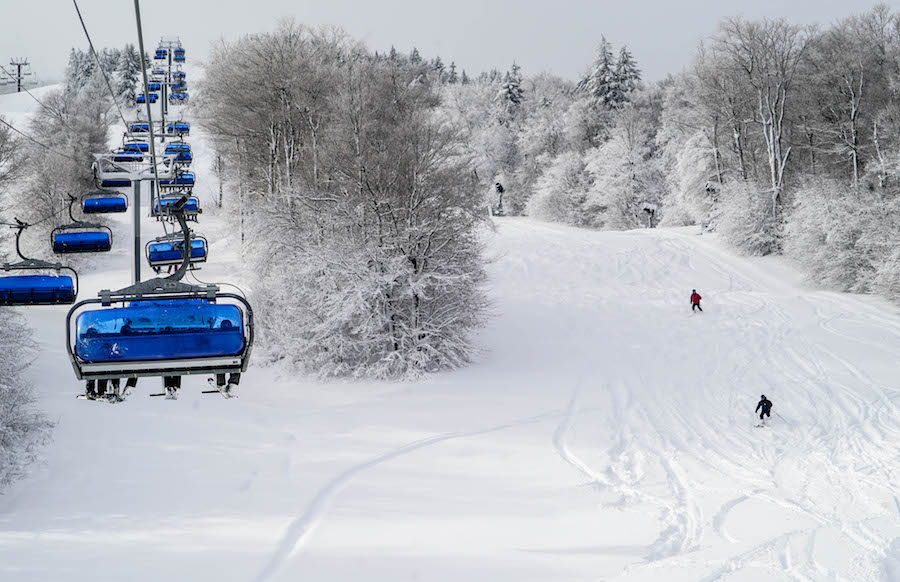 Shares of Peak Resorts Inc. rose 24 cents, or 4.9 percent, to $5.14 Wednesday on the company’s solid second-quarter performance that was bolstered by strong sales of its Peak Pass and plentiful early season snowfall that helped some of its resorts open early.

“We had a historic start to our 2018-2019 ski season,” CEO Tim Boyd said on Wednesday’s earnings conference call with analysts. “For the first time, we began making snow in our operations in October, taking advantage of great early season conditions, including some natural snowfall across the New England. This led to our first ever October openings at Mount Snow and Wildcat. And while our operations were limited for the first few weeks, our early openings and a subsequent opening of Hunter Mountain on November 17 represent our strongest start to the season. [It is a] clear demonstration to skiers and riders that we are committed to providing the most ample, consistent and enjoyable access to skiing and riding in the Northeast.”

The company reported revenue for the fiscal second quarter ended October 31 of $8 million, down from $8.8 million in the prior-year quarter and missing Wall Street’s target by $0.5 million. Increased summer season revenue and the late October season opening of Mount Snow and Wildcat was offset by the termination of Peak Resorts’ operating contract for the hotel at Attitash.

Resort operating expenses in the fiscal 2019 second quarter declined by 9.3 percent year over year to $13.7 million as the company benefited from cost controls implemented across its operations as well as the elimination of expenses related to the Attitash hotel. The company did narrow its EBITDA loss in the quarter. Peak Resorts reported an EBITDA loss of $8.2 million, compared to a loss of $8.6 million in the year-ago quarter, driven by the lower resort operating costs, partially offset by the decline in revenues. Earnings per share of (81) cents beat estimates by 1 cent.

Peak Resorts executives spent a fair amount of time on the earnings call discussing its Peak Pass multi-mountain pass product with Jesse Boyd, Peak Resorts’ vice president of operations, stressing that “season passes are a critical component of our business.” As the company announced in mid-October, year-over-year Peak Pass sales had grown 19 percent on unit basis and 22 percent on a revenue basis, and they have continued to grow since then.

“In fact, as of mid-November, we had sold more Peak Pass for this season than during the entirety of last season,” Boyd said. “Additionally, our popular Drifter Pass for 18 to 29-year-olds remains on sale at a discount level through December 17. Preliminary results indicate the sales of the Drifter Pass will be up year-over-year and we’ll provide an update on final season pass sales after its deadline.”

Pass sales are a critical revenue driver for mountain operators in the autumn quarter—and it’s where all owners and operators or multiple resorts are focusing their efforts—something Boyd also touched on during the call.

“They bring asset visibility through our business during our seasonally slowest months and provide us with the opportunity to continuously engage with our customers,” he said. “They also incentivize our season pass holders to consistently and frequently visit our resorts. Importantly, that our key driver of our underarm revenue, which as of the end of the fiscal second quarter is up 17.5 percent over the prior year to $22.1 million.”

Boyd went on to comment about the “aggressive marketing and season passes by large multinational operators” who are “bringing their passes to our backyard into Northeast as they have acquired and partnered with mountains to provide their customers with additional skiing and riding options.”

A few weeks ago, Boyd spoke with SGB about early season snowfall that has provided a nice start to the season and another surge in pass sales heading into the holidays. “If you have a strong start,” Boyd said, “it’s very great for momentum going into the Christmas holiday.”

Peak Resorts in the third quarter announced the acquisition of Snow Time, which also helped grow pass sales. The company said 27 percent of Snow Time pass holders upgraded to the Peak Pass to take advantage of the company’s 10 mountains in the Northeast and Mid-Atlantic regions.

“With the transaction’s completion coming early in the fiscal third quarter (November 26), Peak has added three attractive resorts to our Northeast and Mid-Atlantic portfolio and expanded our geographic footprint into the Baltimore and Washington, DC, metropolitan areas,” Tim Boyd said.

Analyst reaction to Peak Resorts’ second quarter was positive, with Brad Boyer of Stifel writing in a note to investors: “All told, we believe the 2018/19 ski season remains on firm footing for Peak, representing the best starting point to the year since the company’s 2014 IPO, in our view. Additionally, we do not believe the company is getting any credit for its recent Snow Time acquisition, which we believe should add in excess of $10M to the company’s annualized EBITDA base and came at an attractive sub-7x multiple. In the end, with the shares continuing to trade at sub-7x fully loaded EBITDA (including Snow Time; not reflected in our model), we believe investors can confidently buy into the story at current levels.”