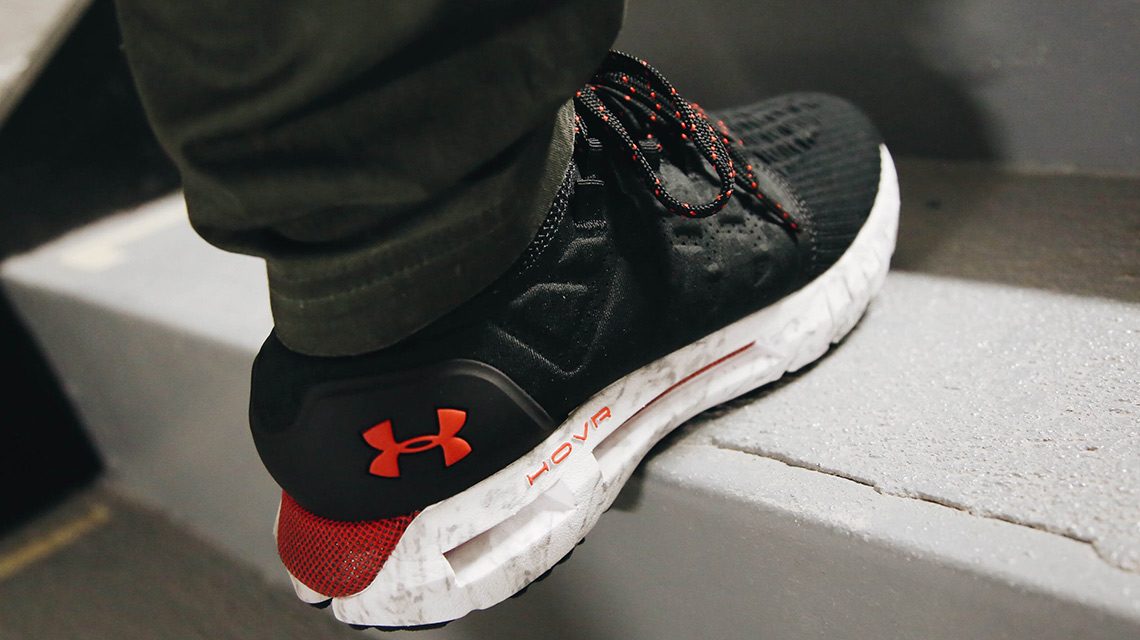 A mostly positive first quarter that saw Under Armour Inc. beat analyst expectations on earnings and revenue has the company doubling down on the “loud brand, quiet company” strategy announced earlier this year.

Under Armour reported revenue of $1.2 billion, up 6 percent compared to the same quarter a year ago. The company’s net loss was $30 million, but excluding the impact of the restructuring plan, adjusted net income was $1 million.

Sales in North America were flat, while international growth was 27 percent, and the company maintained guidance for the rest of the year. On Tuesday’s earnings call, much of Under Armour’s focus was about the “four pillars” of Under Armour’s long-term strategy: product, story, service and team.

On the product front, Under Armour touted UA HOVR, the brand’s latest innovation in footwear cushioning technology that debuted in February. The UA HOVR platform launched in two running styles—the UA HOVR Sonic and UA HOVR Phantom—and will continue to expand into other key footwear categories in the coming seasons, the company said at the time.

“With our category management structure now in place in putting the consumer at the center of development, design and usage occasion, we are obsessing every stitch, function and finishing detail of our products to the distinct sport category lens of the consumer athlete,” CEO Kevin Plank said on Tuesday’s earnings call with analysts. “Equally important as creating innovative product are our distribution and segmentation strategies.”

On the story side, Under Armour reiterated a mantra introduced in the last earnings call: being a “loud brand but a quiet company.”

“We are definitely focused on being a louder brand this year,” Plank said.

To achieve that, the company outlined three objectives: “increase brand awareness, establish deeper credibility with runners and drive reverence through experience and conversion,” Plank said. But “great product” is at the heart of that strategy, he said when pressed on what “being loud” entails.

“You’ve heard us talk about HOVR and the success that we’ve seen there and that’s a first step,” he said. But new shoes are “something that the consumer wants to buy and wants to wear and put on their foot. The good news is that it also engages, it’s got a terrific fit to it as well as it’s got incredible performance from the step and cushion and comfort and feel that you feel in the shoe and also the fact that it’s connected and a part of our 230-million-person ecosystem that we have at connected fitness.

“So, it’s really the trifecta of style, performance and fit that come together that allows us to become a louder brand when that happens,” he added. “At the same time, we want to continue to press on that pipeline of innovation and we want to make sure that our customers are winning with unique and segmented products. If there is anything I want you to take off of this call is our focus on segmenting our line and ensuring that each and every distribution partner or channel that we’re in is something that’s unique and positioned with the right product at the right price at the right time for the consumer.”

Another example is Under Armour’s training campaign, which features such celebrity athletes as Dwayne “The Rock” Johnson, Natasha Hastings, Dennis Smith Jr., Zoe Zhang and Jessie Graff, among others, Plank noted.

These athletes will help Under Armour more clearly and loudly position the brand in 2018, he said. “We want to amplify the story of this brand to make sure that people heard us. We don’t think we were very loud in 2017. And so you’ll hear us tell our stories.”

The Under Armour story is resonating with analysts, most of whom were bullish on Under Armour’s earnings for the rest of 2018.

According to Jim Duffy and Peter McGoldrick of Stifel, “We view 1Q results and reiteration of guidance as evidence of forward progress towards stabilizing the North American market and tightening operations and progress towards inflection of margins in 2H and into 2019. Specifically, we are encouraged by DTC (direct to consumer) acceleration, expense discipline and inventories in line with management guidance.”

And Jonathan Komp of Baird wrote, “Q1 results largely appear reassuring, and UAA held prior 2018 targets; we see several puts and takes with respect to inventory/gross margin and growth across geographies (North America encouraging, International slowed a bit), which should result in ‘muted upside’ for the stock.”

There are no changes to the company’s 2018 outlook issued on Feb. 13. Net revenue is expected to be up at a low single-digit percentage rate, reflecting a mid-single-digit decline in North America and international growth of greater than 25 percent. And excluding the impact of the restructuring efforts, adjusted diluted earnings per share is expected to be in the range of 14 cents to 19 cents.