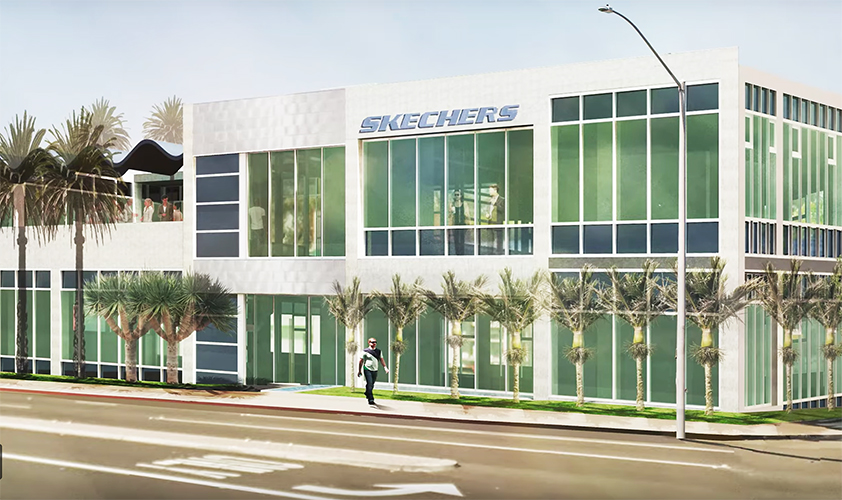 Skechers USA reported sales topped and earnings arrived at the high-end of aggressive guidance in the fourth quarter. The company’s domestic wholesale business marked a return to double-digit growth while international momentum showed little signs of slowing down despite headwinds from the coronavirus outbreak in China.

On a conference call with analysts, David Weinberg, COO, called out a number of highlights in the quarter, including the addition of Arch Fit to its product offering, which also includes Relaxed, Wide, Classic and Stretch Fit; the signing of Dodgers’ pitcher Clayton Kershaw as a new men’s ambassador; opening flagship stores on Rome’s Via del Corso and at Disneytown in Shanghai, its first location on a Disney property; a course record win by Skechers’ elite golfer, Colin Montgomery, at the Invesco Championship in California; being named the number one footwear and apparel brand on YouGov’s top buzz brands for 2019; and the reduction of plastic in its packaging to 7 percent.

Weinberg said, “With our strong backlog and growing direct-to-consumer business, we are extremely optimistic about 2020 and beyond. While we are deeply concerned by the health crisis in China and the well-being of those affected, including our employees, partners and vendors, we remain optimistic about the strength of Skechers in China and committed to our long-term growth strategy in the country.”

The top-line gains were led by a 31.2 percent jump in the company’s international business, or 32.3 percent on a constant currency basis, and a 13.0 percent increase in its domestic business. On a constant-currency basis, total sales increased 23.8 percent.

By region, the 13.0 percent domestic gain was driven by a 16.3 percent increase in its direct-to-consumer (DTC) business with comparable same-store sales increasing 10.3 percent.

Said Weinberg, “With a broad distribution strategy and vast product offering, we are a valuable resource for both our domestic account base and consumers who are seeking comfort, style, innovation and quality in their footwear.

Among categories in the U.S., a double-digit increase was seen its men’s division and mid-single-digit increases were achieved in both women’s and kids. Specifically, the biggest increases came from the brand’s sport and work lines for men and women. Bobs from Skechers collection, women’s GOwalk and men’s casual and performance line as well as the kids’ business returned to growth in the quarter.

Said Robert Greenberg, CEO, in a statement, “2019 was also the year we saw the resurgence of chunky sneakers—and as an originator in this category, we became a go-to source around the world. We also continued to grow our men’s business, introduced the next generations of our walk, run and golf shoes, and expanded the popular BOBS from Skechers line, helping save the lives of over 345,000 shelter pets in the United States in 2019 alone.”

Marketing outreach included television commercials for kids’ footwear as well as spots for the new Max Cushioning and Arch Fit collection. Based on domestic DTC January sales comping up low double-digit and strong backlogs within the domestic wholesale channel, domestic business is expected to continue to show positive growth in the first quarter.

Internationally, the 31.2 percent jump reflected growth in its subsidiary, joint venture and distributor businesses and across each region. The biggest drivers in terms of dollar increases were China, India, the United Kingdom, UAE and Mexico, which transitioned to a joint venture in 2019. The only subsidiary or joint venture markets that didn’t grow were Chile and Hong Kong, both of which faced political unrest during the quarter

Weinberg said the international business remains the primary growth driver for the Skechers brand. He noted that distribution centers in Europe, Japan, India and Latin America were each able to efficiently handle double-digit increase in pairs shipped in 2019 and are being positioned to handle future growth. Said Weinberg, “Our backlogs are up across our international segment and we are seeing the benefit from the conversion of India to a subsidiary and Mexico to a joint venture.”

International represented 59.3 percent of total sales in the quarter, and 57.9 percent for the year.

The overall earnings gain in the quarter was mainly driven by revenue growth with numerous investments being made to support future growth.

Gross margins increased 20 basis points to 47.9 percent as a result of the improved average selling price per unit, partially offset by an increase in the average cost per unit driven, in part, by higher duties in its domestic wholesale business.

SG&A expenses increased 25.5 percent in the quarter and were modestly higher as a percentage of sales, to 41.2 percent of sales from 40.4 percent. Selling expenses increased $26.8 million primarily due to higher advertising expenditures. G&A expenses increased by $84.7 million and remained flat as a percentage of sales. The G&A increase is primarily reflective of additional spending of $32.7 million associated with its DTC business and 47 net additional company-owned Skechers stores, including 21 that opened in the fourth quarter, and $28.2 million to support the growth of its joint venture business, including in China and the addition of operations in Mexico.

For the first quarter, Skechers expects to achieve sales in the range of $1.4 billion to $1.425 billion. That represents a gain between 9.6 percent to of 11.6 percent from $1.28 billion a year ago. Earnings are expected to range between 70 to 75 cents a share, up from 71 cents a year ago. The guidance reflects continued growth in each of the company’s three reportable segments.

John Vandemore, CFO, said the guidance incorporates an initial estimate of the impact to the Coronavirus outbreak in China, including a significant number of temporary store closures. Those that have remained open are “seeing significantly below average traffic and comparable-store sales patterns.” If the severity of the situation in China worsens and impacts the businesses outside of China or the company’s global supply chain, this guidance may change.

“We are planning China down for this quarter,” said Vandemore on the earnings call. “We’ve taken a fairly severe look at February and parts of March. How that unfolds really is to be determined. But it’s really the strength of all of our other business segments that aren’t being directly impacted by the situation right now which is powering our guidance.”