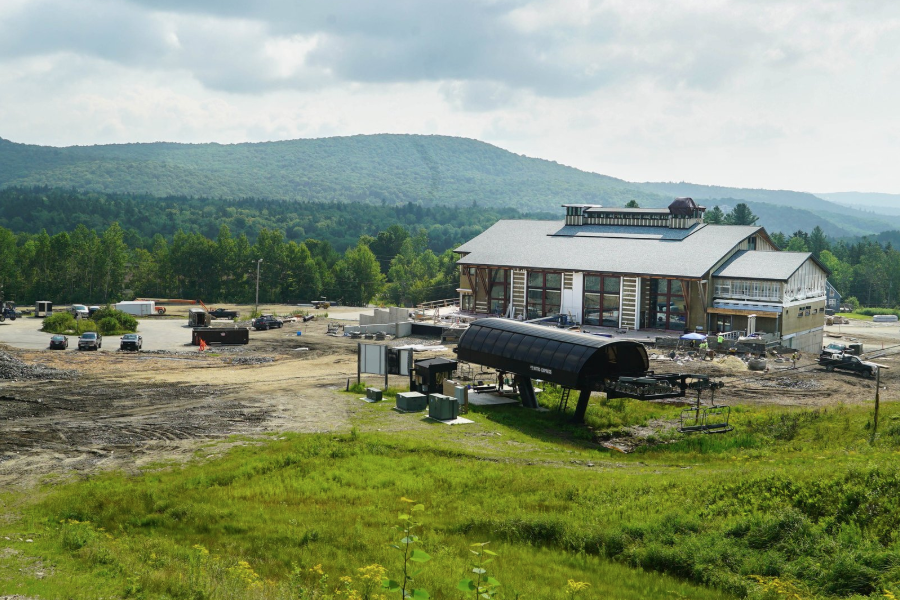 Continued progress with the ongoing construction of a new lodge at Mount Snow in Vermont and terrain expansion at Hunter Mountain in New York will soon pay off for ski resort operator Peak Resorts Inc., which on Tuesday reported Q1 revenue and earnings missed Wall Street targets.

Those projects—expected to be completed in time for the quickly approaching ski season—will help the Wildwood, MO-based company attract more guests this winter and therefore drive additional revenue.

“The Peak Resorts team is actively preparing our resorts for the upcoming 2018-2019 ski season as we remain focused on completing the majority capital projects underway at Mount Snow and Hunter Mountain and making further enhancements to our guest experience at the balance of our mountains,” Peak Resorts CFO Chris Bub said on Tuesday morning’s earnings conference call with analysts.

Peak Resorts (NASDAQ: SKIS), which operates 14 ski resorts in the Northeast and Midwest, is spending $22 million for the Carinthia Base Lodge at Mount Snow (pictured, above) and $10 million to renovate Hunter North at Mount Hunter, primarily new ski trails. The projects, whose progress was announced in early August, represent two milestones for the company—the company’s largest-ever base lodge and the Eastern United States’ largest ski area expansion in more than 15 years.

“The Hunter North project at Hunter Mountain and the new Carinthia Base Lodge project at Mount Snow each represent a significant undertaking, and our ability to accomplish both in one summer is a great testament to the dedicated teams we have in place at our resorts,” Jesse Boyd, vice president of operations at Peak Resorts, said last month. “It’s been amazing to watch these two projects evolve, and we can’t wait for our Peak Pass holders and guests to experience these new and improved properties this coming winter.”

On Tuesday, the company reported a loss for the first quarter ended July 31 of $11.8 million, or (87) cents per share, missing analysts’ estimates by 4 cents. The company’s revenue of $7 million fell short of Wall Street expectations by $0.6 million.

Peak Resorts’ revenue was down from $7.5 million in the prior year quarter as increased summer festival, banquet and event revenue at Mount Snow and Hunter Mountain partially offset the removal of the Attitash Hotel from operating results.

Resort operating expenses in the fiscal 2019 first quarter rose 5.4 percent year over year to $14.3 million, driven by higher wages, higher power and utilities expense and higher other expenses, offset by the removal of Attitash Hotel-related expenses as of May 1.

All that said, Q1—when Peak Resorts often operates at a loss because the company doesn’t generate skiing and riding revenue—continued the momentum of giving Mount Snow and Hunter Mountain some much-needed facelifts, which the company has been documenting on the company’s social media channels.

Reported EBITDA for the first fiscal quarter of 2019 was a loss of $9.5 million compared to a loss of $8.3 million in the year-ago quarter. The increase in reported EBITDA loss on a year-over-year basis was driven by increased labor and other expenses across the business, partially offset by the removal of the Attitash Hotel from the company’s operating results as of May 1, 2018. The increase in other expenses was largely related to maintenance projects undertaken during the seasonally slow summer months.

“During the first quarter, we made great progress in preparing for the 2018-2019 ski season, and to that end, we’ve accelerated some of our normal summer maintenance projects, as we’ll be focusing now primarily on finishing up the Carinthia Lodge in the Hunter North projects here in the second quarter,” CEO Tim Boyd said on Tuesday’s call. “We expect our overall maintenance spending to be consistent with prior years, as the timing around these projects normalizes over the next couple of quarters.”

Peak Resorts’ other expenses increased $600,000, or 18.7 percent, compared to the prior year, including new groomers at several of the company’s resorts and a new company-wide customer database and marketing program. Peak Resorts also pushed forward several repair and maintenance projects to the first quarter to devote staff time and energy to the larger expansion projects.

The moves are seen as favorable by analysts like Brad Boyer of Stifel, who wrote in a note to analysts, “We remain constructive on both of these additions, as we expect the Hunter expansion to generate a low-to-mid teens cash-on-cash return, while the Carinthia base area should help to better disperse crowds and provide additional parking at Mount Snow. All told, we believe the planned enhancements should support management’s desire to raise average pricing in the 6 percent to 8 percent range, as it looks to offset the impact of cost inflation.”

When asked about the potential for M&A in light of larger ski operators like Vail Resorts Inc. and Alterra Mountain Co. snatching up smaller mountains, Boyd wouldn’t go into specifics but did hint at the possibility of some moves.

Even with some M&A on the horizon, which analysts said could strengthen the company’s position in the Northeast, they see Peak Resorts’ small size and lower-priced lift tickets—relative to Vail, Alterra and others—as an advantage in the shifting ski resort landscape.

“SKIS continues to offer what we view as the most attractively valued pass for skiers and riders in the Northeast who are not interested in taking a destination ski vacation,” Boyer wrote. “Whereas SKIS’ larger competitors are building networks anchored by large destination Western U.S. resorts, we see SKIS as having a compelling network of lower price point Northeastern U.S. resorts, anchored by Mount Snow.”