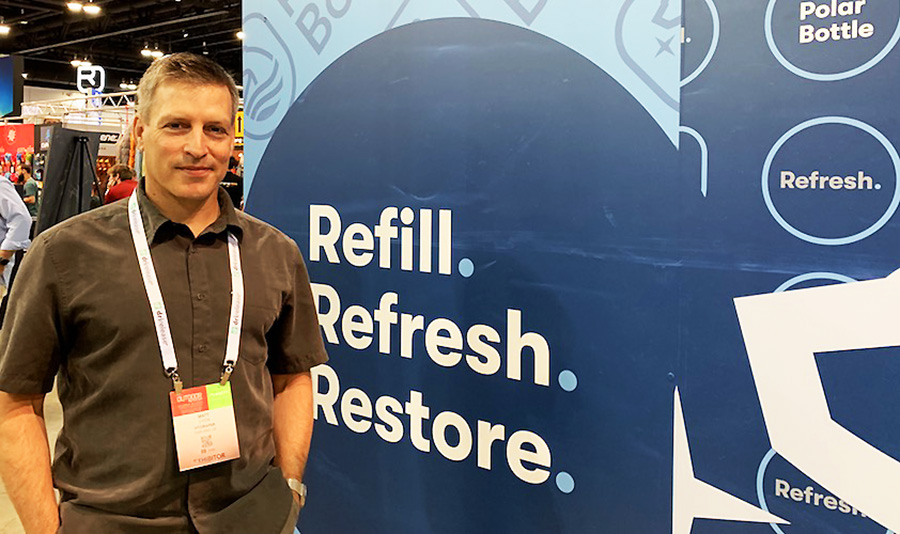 The sights and sounds Outdoor Retailer Summer Market provided an appropriate backdrop for HydraPak LLC President Matt Lyon to discuss the hydration company’s 2018 acquisition of Polar Bottle and its ongoing plans for reinvigorating the longtime brand.

Not only did this year’s OR represent the industry debut for Polar Bottle under new ownership, but it marked the anniversary of Lyon first approaching the Boulder, CO-based company’s founders to see if they’d be interested in selling.

Lyon, whose company also owns bottle-cleaning tablet maker Bottle Bright, knew that acquisition was the likely path for getting into the plastic bottle market, which already had a mature supply chain and well-established providers.

And he had his eye on Polar Bottle, a 25-year-old brand created by Robert Heiberger and Judy Amabile, whose double-wall insulated products have become ubiquitous in bike cages around the globe. So at last year’s OR, Lyon decided the bustle of the trade show floor was an opportune time to ask if Polar Bottle would like to join the HydraPak portfolio.

“I thought to myself, ‘If there’s one thing I could do, it would be to bring Polar Bottle on board because they’re U.S.-based and it’s the original insulated bottle,’” Lyon told SGB during an interview on OR’s second day. “I knew they had kind of hit this plateau and they might be looking for a change. And so I went over, introduced myself and asked if this is something they’d be interested in. Judy looked me in the eye and said, ‘Yes.’”

The deal closed in November, and for the last six months, Lyon has been splitting time between HydraPak’s headquarters in Oakland, CA, and Polar Bottle’s home base in Boulder to integrate the two companies. The process has been pretty smooth, Lyon said, even with uniting two equally sized offices—HydraPak has 26 employees and Polar Bottle has 21.

“There has been a big focus on trying to get the cultures aligned between the two facilities,” he said. “Naturally there’s some overlap when you put together two standalone organizations, but I really wanted to make sure that nothing rash was done. In April, we decided to call our approach to the market the ‘three brand, one company initiative.’”

The formal Polar Bottle brand relaunch will happen in the fall, closer to when the new product drops, Lyon said. But while HydraPak will make a bigger splash with that refresh at Outdoor Retailer Winter Market in November, Lyon was eager to share what’s been happening at Polar Bottle as it goes through a much-needed makeover.

Here is what he told SGB about HydraPak’s plans for its newest asset.

How has HydraPak historically balanced acquisition growth with organic growth, and are there more targets on the horizon? Our acquisitions over the years have complemented our organic growth. Obviously, we started as an acquisition when I picked up HydraPak as a backpack line in 2001. In 2006, we bought a couple of products from a designer, and one of those products turned out to be our soft flask, which has been revolutionary for the trail running category and which we’ve been making for over 10 years. A few years back, we acquired Bottle Bright from a couple of guys who were on Shark Tank—that’s been a great product for us. And then Polar Bottle last November. Acquisitions have definitely been part of our game plan as we’ve expanded. If it’s a category where there’s already an authentic brand that has some heritage, innovative technology and an established supply chain, we’d rather buy rather than build.

How’s the integration going and what has been the biggest challenge? It was a bit of a reset for the culture at Polar Bottle. We were bringing in new energy and a new focus on innovation, branding and specialty retail commitment—and some of those things hadn’t been there. But the group really absorbed it fast, and we’re very excited about where we are today. We have been running as fast as we can for the last six months to align the culture, branding, new product development and distribution. And we’re getting out of some of the lower price-point shops and working back toward the specialty commitment.

Speaking of that specialty commitment, how does the channel strategy change for Polar Bottle, and really for HydraPak as well? HydraPak will continue to be specialty focused—specialty outdoor, specialty bike, specialty rock. That is the lineup for our product offering with OE customers. We’re working with the top brands in each one of those channels, and it’s important that there’s integrity between our branding and our partners’ branding. Polar Bottle started off as a specialty bike brand, but over the last few years, it’s focused just on that larger channel of sporting goods like Dick’s, Target and even Walmart at one point. What I really want to do with the brand is bring it back into specialty bike. We know specialty; that’s our thing. We don’t want to leave sporting goods, but we want to leave anything mass market. Sporting goods will continue to be part of the distribution, but we are committed to MAP enforcement, which is very important to our specialty dealers. We’ve also added some segmentation to the product category this year—a bike-specific version as well a broader sporting goods version—so there can be some distinction. Our goal is to have a following for Polar Bottle in both specialty bike and in sporting goods.

Have you heard any concerns from your dealers about how the acquisition would impact either brand—whether it would change the distribution model for Polar Bottle or the authenticity of HydraPak? We’ve got a lot of momentum with HydraPak, which has seen a lot of growth in the last few years, and our partners see how that hasn’t changed. They see Polar Bottle for what it is, which is quite distinct. I’ve been really gratified by people coming around here at the show—this is the first time we’ve come out with the updated bottle—and giving us great feedback. People have known it over the years and a lot of retailers carried it, but I was worried that maybe people had forgotten about it, especially with all the talk around stainless steel. But not everybody wants to spend $30, so it’s nice to have a $15 bottle option.

There’s no Interbike this year, so how do you get the message to the bike specialty dealers the same way you’re talking to outdoor specialty dealers here at OR? We will have to find a way. We have reps that call on bike shops and there are some definitely some multisport shops with bike departments that have come to see us here. We’re already talking to some of the larger retailers, like MEC in Canada and REI in the U.S. Polar Bottle uses a lot of distributors, so we do have access to the specialty bike channel through those distributors. And because of that, distributor shows will be important to us to begin the education of the distributor rep sales forces. Basically, we need to get out to the retailers wherever they’re located.

What will the brand relaunch entail besides a new logo, alerting dealers and media to new ownership, and announcing a refinement in channel strategy? We’ve done a couple of brand relaunches in the past few years, such as when HydraPak introduced flexible bottles and water storage. I was skeptical about spending all that money on the relaunch, but I found some real value in the enhanced ability to tell our story. We had always been about innovation and we had always been about performance, but the brand relaunch allowed us to tell our story to consumers better. I really saw the value in that. When we bought Bottle Bright, we did the same thing. And now that’s the plan for Polar Bottle. The relaunch will be about a new logo, a new vision statement, new video pieces, a new website. But it will also be about the new product technologies and improvements that we’ve been making over the last six months.

Billabong to Acquire Stake in Surfstitch