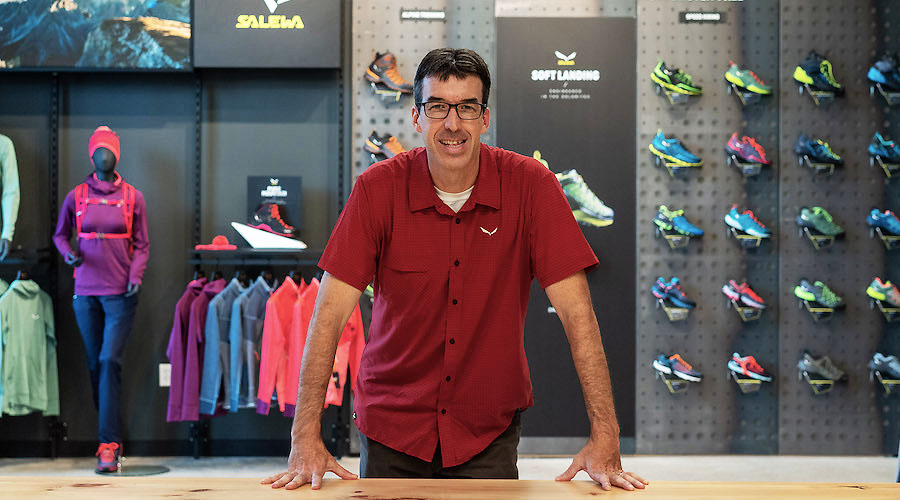 The past nine months have been a whirlwind for Drew Saunders, but the frenetic pace is nothing new for the Massachusetts-born, New Jersey-bred and Pennsylvania-educated Coloradan whose personal and business travels have taken him the world over.

He had joined the company as customer service manager in 2008, becoming just the fourth employee in the North American office. At that point, Salewa NA sold only Dynafit winter hard goods and generated about $1 million in annual revenue.

Saunders was soon promoted to customer operations manager and then director of operations, and he now leads the Boulder, CO-based division, which grown all four brands significantly in the last decade.

According to Oberalp Group CEO Christoph Engl, who spoke with SGB earlier this year, the company’s U.S. operation now accounts for about €15 million (US$17 million) of the company’s global annual revenue of €220 million (US$245 million).

The deal closed in June, with Oberalp acquiring Evolv from BRS Outdoor Holdings, an investment platform of BRS & Co., for an undisclosed amount. Click here to read SGB’s coverage of the acquisition. It gave the company a foothold in the climbing shoe category—and it should also give the top line a nice boost.

“Adding Evolv to our portfolio will grow our North American business by about 50 percent,” Saunders told SGB during a recent interview. “It’s a notable increase in the U.S. business, and it really starts to change the scope and the scale of our business.”

Evolution Of A Deal

With such a sizable revenue increase expected for the North American division, Oberalp’s acquisition of Evolv will be transformative, to say the least. And the company has one person in particular to thank for the deal coming to light—Kurt Smith.

Smith, who Saunders called a “cult of personality,” is the Southeast sales rep for both Salewa and Evolv in the U.S. When Smith learned that Evolv was looking for a new parent—the majority owner was a private equity firm—he connected the two.

Saunders and the other Oberalp executives were immediately intrigued. The idea of acquiring a climbing shoe brand rather than growing one organically made sense for Oberalp as a more efficient way to step into what the company knew was a difficult category.

“Under the Salewa brand, we developed climbing shoes over the years to use for athletes, but they probably weren’t commercially ready at that time,” Saunders said. “With Wild Country, in the last couple of years, we developed climbing shoes commercially, but there was just a long way to go on that path. This represented a quicker and probably more effective opportunity to get into that space more rapidly.”

It was a natural fit, but while Oberalp’s focus is on the “mountains” and all the gear needed to explore them, Evolv expands that focus slightly. The brand is especially strong in urban centers and rock climbing gyms, so Saunders noted that Evolv provides a “new interpretation of the mountain.”

“The mountain, in this case, maybe takes the form of a climbing gym,” he said. “It’s a modern, American interpretation of what a mountain brand is compared to some of our more traditional brands, like Salewa. But that’s exactly what we were looking for—a little bit more youthful, a little bit more diverse and also American.”

Engl, Oberalp Group’s Italian-based CEO, said the pursuit of Evolv was “enthusiastic,” much like company employees’ pursuit of mountain sports. “This is why the Evolv brand fits so well into Oberalp’s brand strategy,” he said. “The acquisition of Evolv—with a clear focus on climbing shoes and a leadership position in its segment—was a logical step.”

Bringing Evolv into the Oberalp family also means the company can further tap into the rapid growth of climbing, as outlined in SGB’s coverage of the American Alpine Club’s State of Climbing Report. Saunders said the company believes “there’s a long path ahead for the growth of climbing,” while Evolv’s founder, Brian Chung, added that tapping into and even expanding climbing participation is an important part of the brand’s ethos.

“In addition to our focus on creating the best climbing footwear, Evolv will also continue in our mission to make a positive impact in the climbing community through our various initiatives and organizations that we support,” Chung said.

After a “super intense” process under an “aggressive timeline,” Oberalp and Evolv are now in the integration stage of the deal with hopes to complete it by September 1. But only a month after closing, Oberalp has even more clarity around how it plans to elevate the brand and optimize its channel strategy.

As reported when the acquisition closed, Chung will remain with the company as brand and product manager while Oberalp will focus on scaling up Evolv’s production and distribution both in North America and internationally.

Oberalp offers Evolv an existing and robust global distribution network to get brand into more specialty doors, plus cash on hand to spend on such needs as marketing. Oberalp’s ability to scale also gives Evolv the chance to focus on bringing new product to market, which Saunders said will truly start to materialize with 2021 and 2022 launches.

“We already have developed a multiyear product line planning process with specific goals of the number of models that we’re going to bring to market,” Saunders said.

Oberalp will continue to nurture Evolv’s primary channel of specialty retailers and core climbing shops while also looking for sales and distribution synergies with its other brands, notably climbing equipment maker Wild Country.

“It’s sort of a match made in heaven when it comes to brands that we can pair together because they fit well together from a product assortment, but they have such different, in some degrees, backgrounds and heritage,” Saunders said. “Wild Country is more of a trad [traditional] climbing brand that goes way back and has a deep, longer heritage, whereas Evolv is a newer, fresher brand with a more urban indoor bouldering profile. But those two will grow together over time we think.”

The addition of a new brand isn’t the only change that Saunders is overseeing. The North American office is rebranding to the name “Oberalp Group North America” from “Salewa North America,” in part to match the parent company’s nomenclature but really because “it’s a better reflection of who we are going forward,” Saunders said.

“It’s to show that we’re an outpost of Oberalp,” he added. “We’re not just selling brands, but we’re the home of these brands, and we have responsibility for them in terms of product and branding, all those pieces. It’s another stepping stone to internationalize the company, and it will help us elevate our profile within the Oberalp Group.”

The North American headquarters in Boulder, which has about 15 employees now, will add three or four more workers as it absorbs some of the Evolv back-office positions. But could there be additional talent needed for Oberalp Group North America’s locale?

The success to date of the Evolv deal, along with the recent Wild Country and Pomoca acquisitions, also means Oberalp could target other assets for its portfolio. Saunders said the parent company will “selectively but opportunistically be open to additional acquisitions.”

“It comes down to the individual opportunity,” he said. “Just to buy a brand is not what we’re after, but to buy the right brand that can add value to the organization, the organizational capabilities that we have, and benefit both the brand and our company, I think there’s still some appetite for that.”

The rebranding, however slight, is another milestone along the way for Saunders. As he sat in Oberalp North America’s Boulder showroom recently, he was reminded of where this journey began. His first outdoors job was with Kelty, and as he recalled standing among the packs and sleeping bags and other gear, he finally felt at home with his career.

“I was probably making 50 percent of what I made my first job, but I was twice as happy,” he said. “It was clear that the outdoor industry was the right spot.”

He landed in the right spot once again with Oberalp Group, a company he is leading on the next leg of a shared journey, toward a shared destination of growth and authenticity and a commitment to the mountains—no matter what their interpretation.

“It’s been intense, but it’s been a massive learning process,” Saunders said. “From the time I took over as country manager, if you had told me that, within 12 months, we’re going to acquire not only another brand but an American brand, we’re going to take the lead on it, well, it wasn’t in my forecast, let’s put it that way. It’s been pretty dramatic, I would say.”