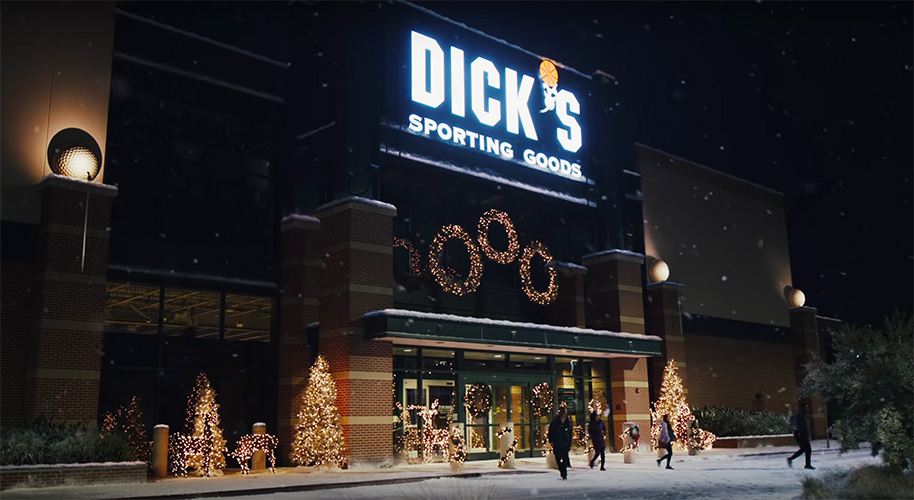 Dick’s Sporting Goods reported its strongest quarterly same-store sales gain since 2013 in the third quarter with a 6 percent gain. At Morgan Stanley’s Global Consumer & Retail Conference, Dick’s officials expressed optimism that the healthy growth would continue, particularly due to the revival in growth at its physical locations.

Company officials said comps at stores grew in the mid-single digits in the third quarter. The overall comp growth accelerated from growth of 3.2 percent in the second quarter that marked a return to positive store comps.

Hobart said the drivers of the accelerated comps weren’t “one magic moment or any event that happened” but the retailer being “very focused on what we would call executing the basics.”

The first step was investing in inventories after finding being “a little too lean” over the last few years led to numerous out-of-stock situations. Said Hobart, “We were assuming people would shop online and make that up. In fact, what we have found, is that we need to lean into our stores and make sure that they have the right level of investment, the right level of service.”

A second step was launching a program in April to elevate in-store service levels and also focusing more on recognizing employee accomplishments. Hobart said Dick’s has “really embraced recognition as a culture, which is a little bit of a change for us in terms of we’re really celebrating even the small wins. We call it ‘The Extra One Percent’ that everybody does every day that makes a big difference in the scheme of things.”

Hobart said, “I feel like all of these different elements have created the flywheel turning, which is why you saw the results you saw this quarter.”

Asked about growth prospects for the overall sporting goods industry, Lee Belitsky, EVP and CFO, said Dick’s only expects to see “generally low single-digit growth” across most categories across the industry.  Athleisure is “growing somewhat higher,” likely in the mid-single digits. But equipment and footwear is “probably a low single-digit grower, pretty consistently.”

The stronger growth at Dick’s is because the retailer believes it’s gaining share in athletic apparel with “very strong” comps in the category. Said Belitsky, “Comp sales in the athletic apparel space, driven by great relationships that we have with our key brands, Nike and Adidas; and real expansion of our private brands, our Calia and our new DSG line, have really helped to drive the growth in that space.”

Team sports’ growth for Dick’s has been helped by a return by the chain to focus on the “more enthusiast athlete assortments.” Belitsky added, “Some better products there that have resonated really well. So it’s helped us grab market share in the team sports equipment area.”

Footwear “has been strong industry-wide, at least over the course of the last quarter or two, and we’ve been even stronger than what we’ve seen in the industry,” said Belitsky. He cited the benefit of improved product allocations from Nike, along with some Yeezy launches from Adidas that Dick’s had for the first time in the third quarter.

Asked if any categories have been surprisingly strong, Belitsky said the retailer has been “very bullish” on athletic apparel and footwear and made “big investments” behind those categories. Some surprises were identified on the team sports and hardlines side.

“I think the continued strength in the hydration category with Yeti and Hydro Flask has been very, very powerful for us throughout the year this year as well,” said Belitsky. “And some of the other hardlines equipment – hardline outdoor equipment categories like bikes and fishing have also been strong. And that was a little surprising because they hadn’t been trending that well. So we have a pretty broad swath of our stores performing at a high level.”

In the team sports area, baseball saw strong growth in 2018 due to a bat rule change and the momentum has continued this year as Dick’s has widened assortments and invested in-depth and marketing. Hobart said, “So, we’ve got athletes of all levels coming to the store, and we’ve also expanded the season because kids are now playing well beyond what you would define as the typical baseball season. They’re playing year-round. That’s just one example. But the team sports have been doing very well. And even football this year surprised us with a strong comp.”

The hunt category was taken out of 125 stores in the second quarter and the retailer was able to replace those items with merchandise that sold at a higher margin rate. Belitsky said the replacement products depended on each local market with some stores expanding in team sports and licensed gear in markets with a strong sports team following. Other markets added more apparel coverage. Said Belitsky, “We kind of went through it store-by-store, developed new plans and expanded those categories where we thought we could grow the business. And so far, it’s been successful.”

The removal of the gunt category from 125 stores comes after the category was taken out of 10 stores late in the third quarter of 2018 where unt was underperforming. The overall review of the hunt category continues with the category removed from the least-penetrated hunt stores so far and the third and fourth quarter representing peak hunting season. Said Hobart, “It is a business that has been a challenging economic business, low-margin business, very cyclical.”

Belitsky elaborated on why Dick’s so far is expecting a minor impact on tariffs in the near term. The CFO noted that 15 percent of its products are private label and most of that apparel is not sourced from China. The hardlines business involves Chinese production and Dick’s is negotiating with suppliers to keep prices down and exchange rate have been favorable. Said Belitsky, “It’s been able to mitigate some of the pressure on tariffs in private brands there. And it really hasn’t been much of a factor for us on the apparel side.”

On the remaining wholesale business that makes up 85 percent of its mix, Belitsky said the company is “not seeing much at all” as far as vendors proposing price increases to offset tariffs. He said, “Either they’re able to move production in some cases, or they’ve been able to negotiate better deals with their suppliers overseas, or they’re absorbing some of the costs themselves. But we’re not seeing much cost pressure even going into the early part of next year with regard to tariffs.”

A “couple of small categories” have seen a price increase due to tariffs but they represent lower-single digits as a percent of penetration in stores.

The ScoreCard loyalty program has over 20 million members and supports over 70 percent of transactions. The program drives loyalty but also offers an “enormous database for us that we can use to tap into our customers from a marketing standpoint,” said Hobart. A ScoreCard Gold tier was just launched for customers who spend over $500 a year with Dick’s or have a Dick’s credit card and they’ll earn opportunities to attend exclusive events, earn additional points and other perks. Said Hobart, “It’s a way for us to really reward the loyalty that our best customers have and for us to know when they’re coming into the store.”

Asked about targeted marketing, Hobart said Dick’s has information on ScoreCard members’ purchases as well as some demographic and general profile data that the retailer will use to personalize communications, where possible. Hobart said, “We try not to send just mass e-mails out. But if you have a kid playing baseball, you’re going to get a different cadence of direct mail and e-mail than a customer who’s got a kid playing soccer or a runner. Our ScoreCard members are our best customers.”

Dick’s rolled out the new associate training programs focusing on elevating service levels in April on a Sunday night to all 40,000 teammates “to roll it out in a big, big way.” The program, along with the employee recognition efforts, is helping improve service standards and evidence is being found with improved in-store conversion, customer satisfaction findings and employee turnover. Still, Hobart said the retailer remains in “very early innings” in terms of raising in-store service standards. Hobart said, “We’re very critical of ourselves. We look at it like we could continue to improve this meaningfully for some time to come.”

E-commerce is profitable with “solid EBIT levels” despite most products shipping to customers for free, said Belitsky. Online made up 15 percent of sales last year and increases in the mix during holiday selling. In the 2018 fourth quarter, online represented 23 percent of sales.

Hobarts described Dick’s also as still in “early innings in terms of our online experience.” After re-launching the e-commerce platform in-house a few years ago, the last two years have been spent in aspects such as decreasing page load times and making checkout easier “but not delighting the customer – just kind of getting the basics up and running.”

Dick’s is now increasingly focusing on fulfillment times, particularly speeding delivery. Said Hobart, “We actually do have already significant penetration of buy online pick up in-store that is doubling the e-commerce growth rate in terms of meeting customers where they want to be served on the very same day. And we will be working hard to get that faster.”

A partnership with FedEx is helping reduce delivery times with shipments arriving on Saturday and Sunday delivery expected to be added soon. Dick’s also can ship from all 850 stores to reach “to almost everybody” across the country, except for those in Alaska and Hawaii. Said Belitsky, “We don’t have the full assortment in every store, but we have the key items.”

The recent launch of DSG, an opening-price point private-label brand that is replacing the licensed Reebok range, is off to a strong start from both a sales and margin standpoint. Said Belitsky, “We’re running much better margins in DSG than we did in Reebok in that replacement, and it’s a larger business. And we expect that to continue through the rest of the year this year.” The launch was the retailer’s largest ever and the brand outperforming both in sales dollars and margin rate.

Dick’s officials reiterated that they expect DSG, a broad collection that includes hardline items as well as apparel, to become the chain’s largest private brand by the end of next year. Hobart said the given the focus on quality and friendly price-point, DSG is expected to “help us kind of get some market share that may have been going to some other retailers.”

Overall, private label makes up around 14 to 15 percent of the company’s sales and Dick’s goal continues to be to have private label become a $2 billion business.

No Plans For Ramped-Up Expansion

Belitsky said Dick’s will likely open 10 to 20 new stores annually in the coming years while closing about five to 10. Dick’s slowed its expansion rate in 2017 given the disruption facing physical retail and the slower pace is expected to continue. Belitsky remarked, “Net new, it’s pretty modest growth. In the sporting goods space, there’s been a lot of dislocation over the last few years and many competitors have gone out of business, and there are some large retail trade areas that have no sporting goods stores at all right now. So there’s still some white space out there with good business to be had.”

Dick’s continues to look for a 50 percent cash-on-cash return in the first year of a new store opening. The minimum threshold to open a new store is an 18 percent return on investment (ROI), including corporate expense allocations, and the retailer has found success reaching those targets. Said Belitsky, “We’re just waiting for the right economic deals. We’re not in a big hurry to open stores now. Some of the markets that we’re not in are very expensive real estate markets like New York City, and we’re waiting for the right opportunities to enter those markets financially.”