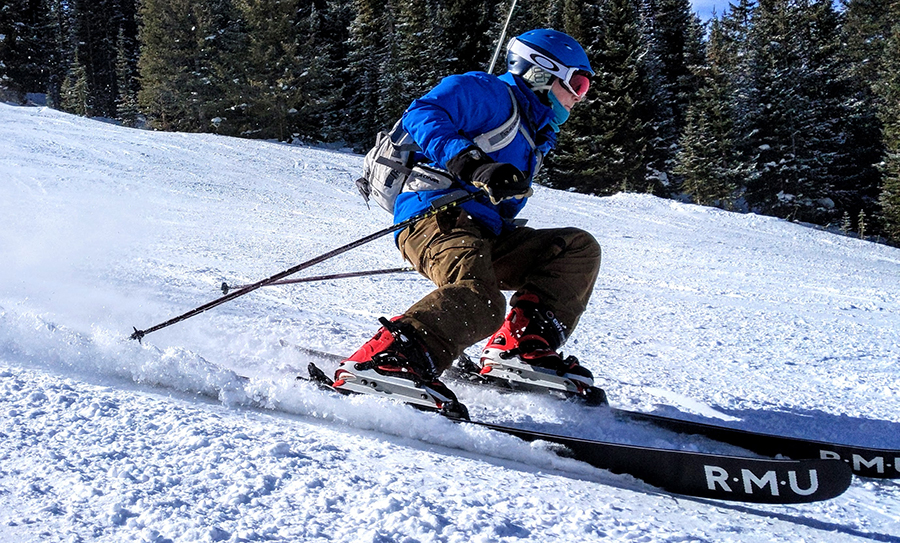 Specifically, think about how a pair of them makes your feet feel after a long day on the slopes. Not only are your dogs freezing, but you’ve likely got cramped toes, aching arches and sore calves. Was that snug fit worth it for a mellow day in-bounds with your spouse or easing down some greens while teaching your kids how to pizza wedge?

Many skiers equate the sport with foot pain, but three upstart ski footwear companies believe that alpine skiing shouldn’t bring agony, so they aimed to make it more comfortable.

Dahu Boots, Envy Snow Sports and Mad Jack Snowsports all launched in the last few years—joining longtime player Apex Ski Boots—with the shared goal of not only getting more people skiing but also keeping them on the slopes for longer periods each ski day and even later into their lives.

Their new product category hinges on one concept—enhancing foot comfort—and it can be broken into two camps.

One is the type of boot that Apex introduced in 2006. This system includes a separate boot and a shell. When the two are integrated and the shell clicks into a ski binding, a skier gets the stiffness needed for downhill turns. When a skier steps out of the shell to walk around the resort, he or she has the comfort of a hiking boot. Dahu, a Swiss brand, brought a similar concept to the U.S. in 2019.

The other concept is a “ski frame” that resembles a snowboard binding and allows a skier to wear a snowboard boot (sold separately) that fits into the frame. The frame clicks into a standard ski binding, giving a skier the chance to wear the comfier boot with the stiffness of the frame. Envy and Mad Jacks launched this type of innovation around the same time, debuting at Snow Show a few years ago.

While each company shares the goal of bringing more people to skiing and making the sport easier on one’s feet, each has a unique approach to the category. Here is a rundown of the category’s three newest entrants.

Dahu is led by former Burton Snowboards executive Clark Gundlach, who worked alongside company founder Jake Burton Carpenter for 25 years. Gundlach said the time is right—especially with the growing number of older skiers—to introduce a more comfortable way to ski.

“The ski community is ready for some evolution and innovation in ski boots,” Gundlach told SGB Executive. “Not that it hasn’t been there, but it hasn’t been there at this level. We took that traditional ski boot design and have re-engineered it to be a more comfortable and performance-driven product. It’s been fun disrupting. There are a lot of eyes on us in the industry, and we’re having success.”

The Switzerland-based brand, whose name is a mythical alpine goat, launched in Europe in 2014 before arriving in the U.S. last year. Dahu products are sold in about 25 select specialty retailers across North America, and the brand is now owned and managed by Progression Brands, the company that’s also introducing Movement Skis to this market.

Gundlach said the company’s goal now, besides spreading the gospel with more retailers, is convincing skiers that the only thing they’ll lose with Dahu is foot pain.

At the recent Outdoor + Snow Show, Dahu released the next generation of its Ecorce 01 and Ecorce X models, which will be available next season.

“It’s the next step up,” Gundlach said. “The shell design and the shell concept is exactly the same, but what we’ve done is upgrade the material in the inner boot, which we call the cambium boot. We also added a RECCO locator into each of the new boots for next year to give people a sense of safety.”

Chris Schroder had an epiphany on a family ski trip a few years ago. At the end of the day, his mom and sister were griping about their aching feet while Chris and his dad—who were both snowboarding—felt fine.

Schroeder thought, “What if there were a way to bring the comfort of snowboard boots to skiers?” Before long, he and his father developed a prototype of the ski frame and later 3D-printed an updated version of it. After a few iterations, the Envy Ski Frame is on the market and should hit 1,000 units sold this year, Schroeder said.

“We’re creeping ever closer to that number, and the response from our customers is great, especially those that fit into our bread-and-butter customer, which is a beginner/intermediate skier that skis a few times a year and wants a comfortable option instead of a hard-shell boot,” he said.

Schroeder moved to Colorado a few years ago to be closer to the testing grounds of nearby ski resorts, and the company is now based in Golden.

He said education has been the biggest hurdle for the Envy Ski Frame because it’s such a niche product, but the company is getting some traction in demo centers. The company has been supplying centers with frames to reach a broader audience more quickly.

“The customers can come in and try out the product for generally a low cost, and then if they wanted to purchase from the shop, they could or they could purchase online from us,” Schroeder said. “We found that that model has worked. It’s no cost for the ski shop because we’ll send them the ski frames for free. And it helps us because it gets the frames in front of people and gets more of them out on the mountain. It allows our customers to try the ski frames on the hill before they make the purchase.”

Mad Jacks: From Cocktail Napkin To The Slopes

Around the same time as Envy—though neither party was aware of the other when launching—the husband and wife duo of Eric and Kristin Mehiel created Mad Jack Snowsports in California after a particularly disastrous day on the slopes, Kristin told SGB Executive.

After skiing with her kids and then enduring a long walk back to the car across an icy parking lot—the “death march,” as she called it—Mehiel threw her gear to the ground and said she was done with skiing. The foot pain wasn’t worth it anymore and she was pissed off. “I hate my ski boots,” she remembered saying. “I want to snowboard.”

Meanwhile, Eric Mehiel said he recalled one afternoon when he was skiing with their young children. At day’s end, when he was stepping out of his skis, he noticed that he hadn’t even secured all four of his boots’ buckles. Perhaps a skier didn’t always need their boots locked down so tightly.

A few weeks later over après drinks, the Mehiels and their friend Bill Demarest came up with the concept for the MadJack—an adjustable frame that allows someone to wear the much more comfortable snowboard boots yet still click into a ski binding.

Eric Mehiel and Demarest, both engineers, scrawled the initial design on a cocktail napkin. The MadJack has now been through a few iterations and is available online and through select retail partners.

“We’re in a good place because we have been able to show that people like and have been buying our flagship products, the MadJack,” Kristin Mehiel told SGB Executive. “Now it’s a matter of expansion. Most of our sales have been direct-to-consumer online and we have moved into fulfillment by Amazon, and we’re also in the EU through Amazon.”

The MadJack is being sold in retail, available for rental and also being sold in second-hand stores, but Mehiel said the next step for the company is scaling up distribution through sales representation.

“We’re new to the industry and we’re not the status quo,” Mehiel said. “We are innovative and different, but I feel like we’re a good match with somebody who’s repping snowboard boots. It’s another add-on product potentially for them too.”

Many Paths To The Same Summit

Despite the differences in origin story and product design, the companies in this new category all have the same goal (besides selling more product, of course)—get more people to ski.

These new-to-market companies are finding their own way, bootstrapping their operation through self-funding with the occasional angel investment. They’ve also found that they’re targeting different audiences for their product.

Schroeder said Envy had expected an older customer base as the primary demographic, someone who wanted to keep skiing despite slowing down a bit or maybe get back into the sport after lapsing for a few years.

“While that customer does exist, the person that we sell to mostly is a parent, generally in their mid-30s to mid-40s, who has been skiing for most of their life, but has never owned equipment,” he said. “This is their first time buying ski boots, and they absolutely love our product.”

Kristin Mehiel said the MadJack was designed for several audiences, primarily the “all-mountain skier who just wants to be comfortable” but the company has been targeting some other groups, as well.

“We’ve been doing quite a bit with ski patrol and ski instructors, in particular, because nowadays a lot of them have to teach both skiing and snowboarding,” she said. “With the MadJack, they don’t have to go down to the locker and change. They can put on their snowboard boot, teach a snowboard lesson, and for their ski lesson, they put on their MadJack and off they go.”

The Envy Ski Frame and the MadJacks are priced around $300 (with discounts available) plus the cost of snowboard boots. However, that system is still less expensive than Dahu’s setup, which starts at $900.

“It automatically targets a more luxury-driven consumer or someone that doesn’t mind paying for performance,” Gundlach said. “I guess the question is, will we eventually come in with a lower price point alternative? We’re working on that now.”

Alpine skiing participation has plateaued of late, according to the latest data from Snowsports Industries America (SIA). So while pricing and target audience might be different, each company said it hopes to get more people sliding down snow—without the foot pain that keeps some skiers off the slopes.

Editor’s note: This article was researched and written before the coronavirus crisis took hold and shut down ski resorts and snow sports shops.