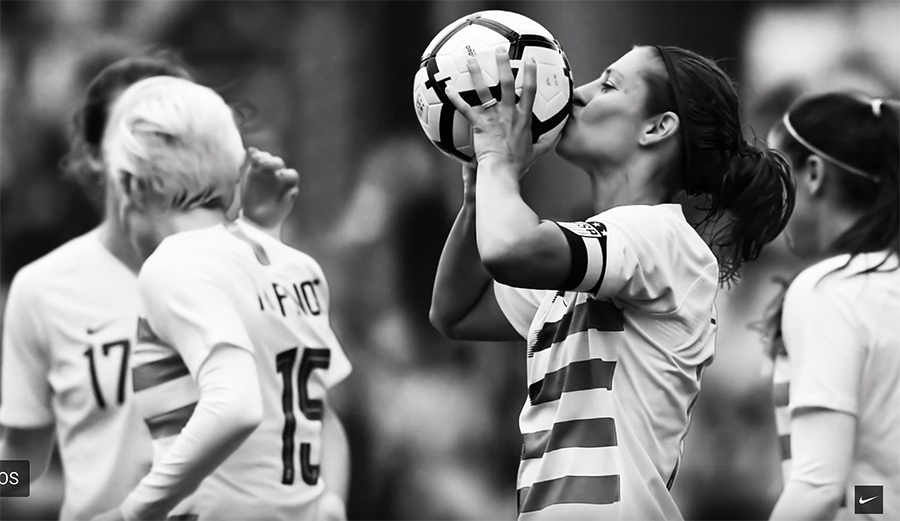 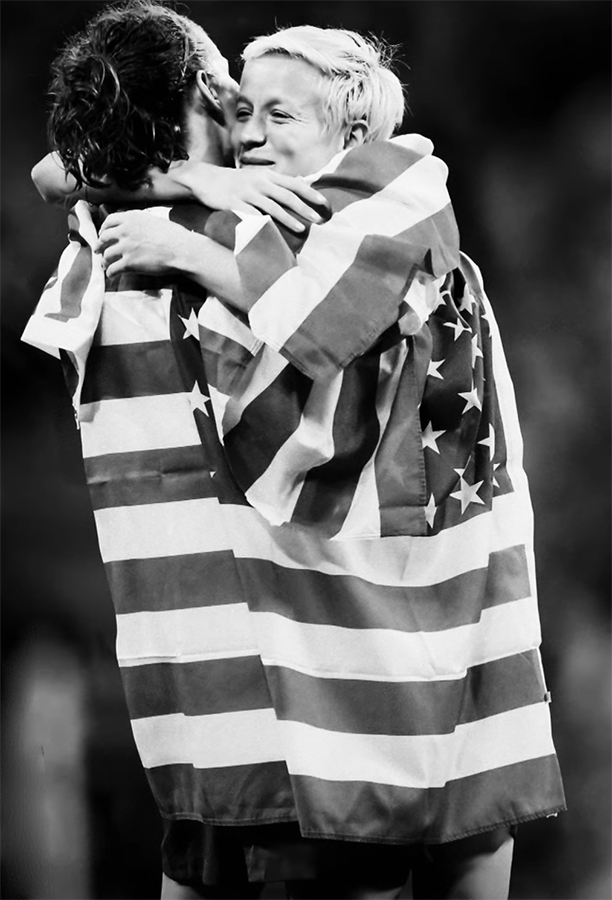 With more than 200 broadcasters in attendance and many giving games prime-time slots on network television, the Women’s World Cup appears to have broken through as a spectator sport.

FIFA estimated that this year’s World Cup will have drawn one billion viewers for the first time. TV records were broken across the globe including in France, Germany and China. Almost 59 million people watched Brazil’s last game against host France, making it the most watched women’s football match of all time.

In the U.S., the U.S.’ 2-0 victory over the Netherlands on Sunday beat last year’s men’s World Cup final in viewership by over 20 percent but still fell behind the record-breaking 2015 women’s final between the USWNT and Japan, played in Canada and aired in primetime. The final finished third overall in women’s World Cup history behind the 1999 team’s win that saw Mia Hamm, Brandi Chastain and Julie Foudy break out as stars.

The hope is that the National Women’s Soccer League (NWSL) receives a boost in attendance as the U.S. team’s stars return to play for their hometown teams. All 23 players on the U.S. roster play for NWSL teams along with more than 30 World Cup players from 10 other countries.

Established in 2012, the NWSL represents the sport’s highest level in the U.S. and has lasted longer than its predecessors, the Women’s United Soccer Association (2001/03) and Women’s Professional Soccer (2007/12). The success is attributed to more modest expectations, including playing in smaller stadiums with smaller budgets. In 2018, the league averaged more than 6,000 fans at games for the first time.

Fanatics declared that the USWNT was the top-selling U.S. national soccer team—men’s or women’s—of all time. Other data provided to SGB Executive by Fanatics is as follows:

Strong demand for team merchandise was already evident from the June 27 fourth-quarter conference call from Nike Inc., the kit provider for the U.S. team. Mark Parker, chairman, president and CEO, said that the U.S. women’s home jersey ranked number highest sales for either a men’s or women’s jersey sold on Nike.com.

In a statement Nike posted on July 4, the company said that its overall jersey sales tied to the women’s World Cup were up 200 percent compared to the 2015 World Cup. Beyond the U.S., France, England, Nigeria, and Brazil were also called out for strong gains. Sales of women’s apparel related to the tournament were up more than 150 percent. Several countries also started selling the women’s jerseys in men’s sizes, “nearly doubling the number of men’s jerseys sold over the previous tournament.”

As in many major sporting events, debates surfaced again over whether Adidas, the sponsor of the Women’s World Cup, or Nike, by far the larger sponsor of teams and players, received more exposure from the World Cup. Similar to past discussions, many felt Nike won because of its marketing might.

Nike has earned praise for the company’s, “Never Stop Winning” marketing campaign following the win the women’s team had over the Netherlands that offered a clarion call for women’s empowerment.

A voiceover said in part, “A whole generation of girls and boys will go out and play and say things like, ‘I want to be like Megan Rapinoe when I grow up.’” 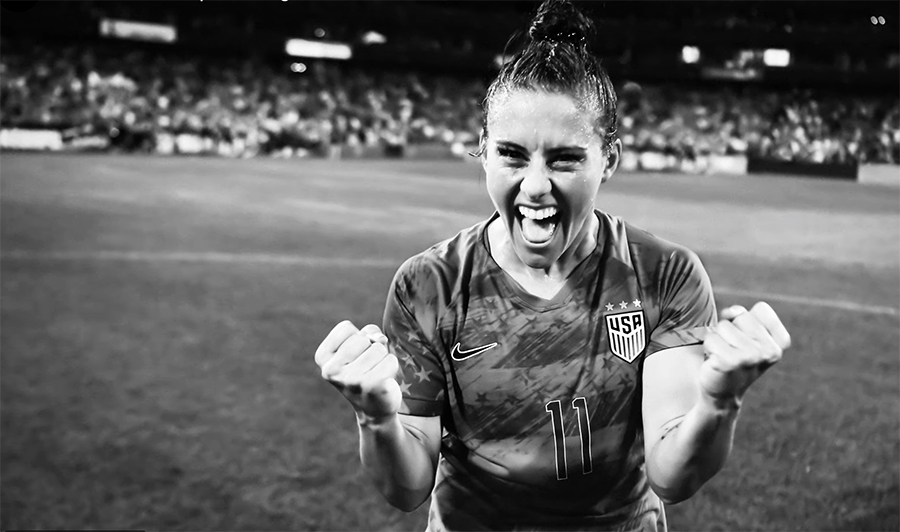 “And I believe that we will make our voices heard and … that women will conquer more than just the soccer field, like breaking every single glass ceiling,” the voice continues. “And that we’ll keep fighting not just to make history, but to change it – forever.”
The video ends with the team holding up the World Cup trophy, followed by two sentences pasted across the screen: “This team wins. Everyone wins.” The video has been retweeted close to 100,000 times and has nearly 5 million views on YouTube. Watch here or click on the still shot pictured above right.

Nike also benefited by starting the tournament as sponsors of 14 of the 24 participating teams, including three of the four finalists—in last year’s men’s World Cup, three Adidas teams and one Nike team made it to the semi-finals.

Nike advertising heavily throughout the tournament including a massive billboard featuring the U.S. team in New York’s Times Square for their World Cup send-off. Many stars on the U.S. team are active on social media, including U.S. forward Alex Morgan with a combined 15.3 million followers across platforms, and that also drove exposure.

Analytics firm Talkwalker said 48.1 percent of all sponsor mentions across social media between June 1 and the end of the tournament went to Nike.

As the World Cup sponsor, Adidas’ logo was emblazoned on the game ball and signage across stadiums. Adidas sponsored six teams: Sweden, Germany, Spain, Scotland, Argentina, and Japan. Sweden made it to the semi-finals.

Adidas received praise for the company’s commitment, announced in March, to give the same bonus to any of its sponsored players on the Women’s World Cup-winning soccer team as their male counterparts.

Members of the U.S. women’s team are engaged in a gender discrimination lawsuit against the U.S. Soccer Federation alleging the organization unfairly pays male players far more than female players. Visa, one of six global FIFA sponsors, also earned praise for pledging to spend the same on marketing the Women’s World Cup as it did the men’s World Cup in Russia.

The topic of pay disparity was discussed widely during the tournament with “equal pay” chants heard during Wednesday’s ticker tape parade for the U.S. team in New York City. Some see their high-profile fight for pay equity putting the spotlight on the overall pay gap for all women.

Two events—the U.S. hosting the men’s World Cup in 1994 and the women’s national team winning the World Cup in 1999—are credited as catalysts for the rise of youth soccer in America. Two years after the 1994 tournament, Major League Soccer began with 10 teams and has grown to 23 teams, 20 in the U.S. and three in Canada. Youth soccer got a bump as participation rates rose to 2.4 million in 1995 from 1.6 million in 1990. Today, that number stands at 4 million.

In general, however, participation in youth sports nationwide, including soccer, has declined in the past decade, as kids gravitate toward electronic and other distractions.

From 2014 through 2017, the percentage of 6- to 12-year-olds playing soccer regularly dropped nearly 14 percent, to 2.3 million players, according to the Sports & Fitness Industry Association (SFIA). In recent years, baseball and basketball experienced upticks, supported by developmental programs started by the MLB and the NBA.

Soccer has continued to decline. High burnout rates from pushing kids too young into travel soccer leagues as well as the high cost of programs has also contributed to the lower numbers. The U.S. men’s national team, who did not qualify for the 2018 World Cup in Russia, was also a setback. 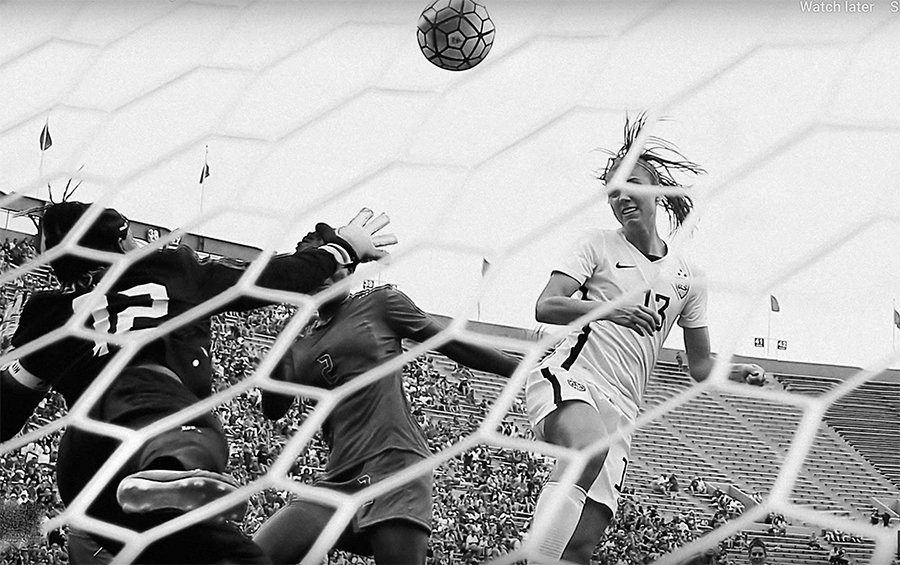 The Women’s Sports Foundation, founded in 1974 by Billie Jean King, finds that 60 percent of teen girls participate in sports compared to 75 percent of teen boys. By age 14, girls drop out of sports at twice the rate as boys.

The U.S., Canada and Mexico will host the 2026 men’s World Cup, and the U.S. Soccer Foundation hopes that will offer an opportunity to jumpstart soccer participation across genders. The three hosts qualify automatically.

Many are hoping the frenzy created by USWNT’s win will inspire the next generation of soccer players and star players. An example was provided by St. Vincent Ferrer Catholic School where Rose Lavelle, who scored the final goal against the Netherlands, went to grammar school. The school shared a photo of an eight-year-old Lavelle dressed as soccer legend Mia Hamm for a book report.

“Once upon a time, this little girl dressed up as her hero, Mia Hamm, for a book sharing project,” the post reads. “Today, this amazing woman won her own gold medal, wearing the number 16, as part of the United States National Women’s Team.”

“I am honored,” tweeted Hamm, who starred for the U.S. team in the ‘90s. “Now it’s our kids who are wearing their jerseys and wanting to be like these badass women.”

The North Face, JanSport to Move to Alameda 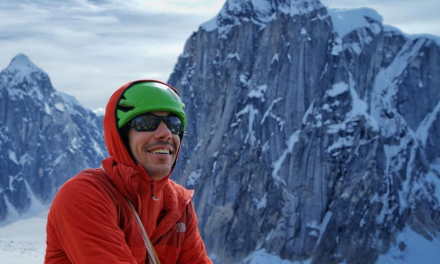 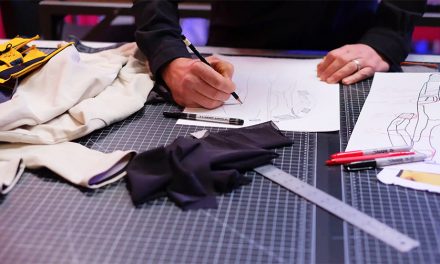