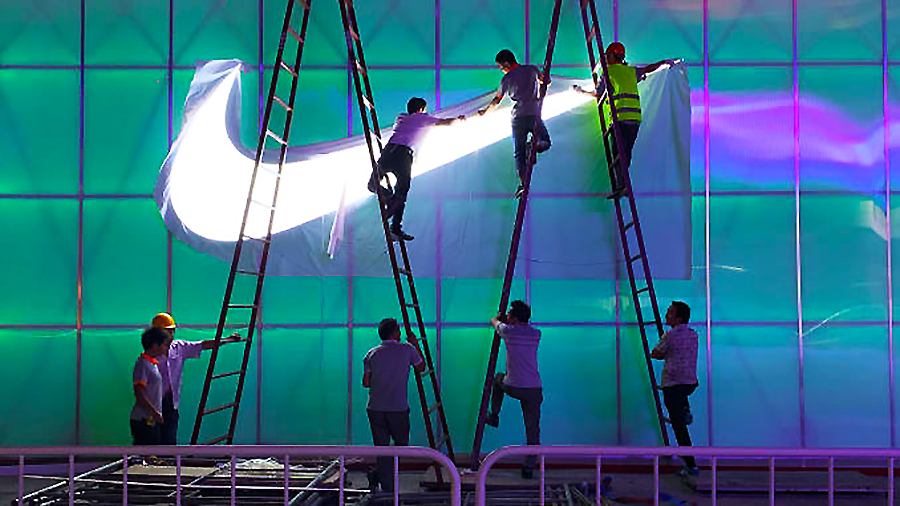 While Nike missed earnings targets in the fiscal fourth quarter by a wide margin and elevated inventories remain a concern, analysts were encouraged about the brand’s positive online sales momentum and the resumption of growth in China. Most applauded Nike’s move to accelerate its digital transformation and heighten its focus on women’s and apparel.

Among the highlights of Nike’s Q420 report:

›Piper Sandler reiterated its “Overweight” rating on Nike with a $112 price target following the report.

Lead analyst Erinn Murphy wrote that even though earnings were “well-below Street estimates,” sales were slightly ahead of Piper Sandler’s targets and top-line growth showed some momentum in several areas, including online growth accelerating to 100 percent in the quarter-to-date period from 79 percent growth in the fourth quarter. Murphy also noted that China’s store comps are up in June and Nike officials saw inventories becoming balanced in China by the close of June. Globally, Nike predicted inventories would be in balance by the end of its November quarter.

The analyst also called out women’s growth at two times the rate of men’s in Q4, a 100-percent hike in new members and significant growth in engagement with Nike apps. Murphy wrote, “As NKE’s frequency of customer engagement accelerates digitally, we believe its ability to directly facilitate customer purchases (at higher margins) will further strengthen, a unique attribute to the model.”

›Jefferies maintained its “Hold” rating at a $101.40 price target. Wrote Randal Konik in a note, “The Nike brand remains strong, and we believe that it will benefit from health/wellness becoming an even greater focus among consumers. However, its primarily wholesale selling model will weigh on the company’s rebound as the inventory build-up will take time to work through and DTC will likely be unable to fill the void. We wouldn’t chase shares at these levels as we view valuation as full and therefore we maintain our Hold rating.”

Konik highlighted the strength in digital, as witnessed by Nike officials indicating the Nike commerce app had been downloaded over 8 million times since February, at three-times last year’s levels. But inventory grew 31 percent in the quarter versus a sales decline of 36 percent on a currency-neutral basis. Konik wrote, “As a result of its wholesale exposure, NKE’s ability to rebound from COVID-19 will be heavily reliant on those stores ability to clear inventory, which we expect to be an extended process, given consumers lack of urgency to return to malls even as they begin reopening.”

›Susquehanna reiterated its “Positive” rating on Nike and maintained its price target of $130.

Wrote lead analyst Sam Poser, “We think short-term headwinds are masking NKE’s long-term potential. Investors should look past the challenges that NKE will face over the next two quarters and focus on the unmatched global strength of the Nike brand, digital prowess, best-in-class customer engagement, unrivaled product innovation, and fortress balance sheet.”

Poser applauded Nike’s move to accelerate its digital transformation. He noted that at its investor day in October 2017, Nike officials set a target for digital penetration (owned and partnered) to reach 30 percent by fiscal 2023, and Nike officials indicated they expect to accomplish that in fiscal 2021. With the new goal set at 50 percent digital penetration, Poser estimates Nike is targeting 25 percent to 30 percent owned e-commerce penetration with wholesale-partner sites making up the balance.

Poser wrote, “Notably, revenue and operating margin of selling one unit through NKE’s owned e-commerce is double that of selling the same unit to a wholesale partner. Further, owned e-commerce provides NKE more control over 1) the brand and 2) the ability to harness the pull model that NKE has worked to establish since its inception. We believe CEO John Donahoe, with experience running digitally native consumer companies such as eBay and ServiceNow, is the ideal executive to lead NKE into the next phase of this digital evolution.”

Analyst Jonathan Komp wrote in a note that while his team was encouraged by the recent improvement in sell-through and Nike’s move to accelerate digital and direct-to-consumer (DTC) strategies, FY21 and FY22 forecasts will be reduced “meaningfully” due to the earnings miss and cautious outlook.

Komp noted that Nike sees sequential improvement quarter-by-quarter but is expecting revenue to be down in the first half and flat-to-up for FY21. With gross margin pressures also continuing in the first half, the analyst reduced his FY21 estimate to $2.25 from $2.75 previously. Komp noted that while Nike is reducing inventories and has cut fall/holiday orders by 30 percent, “we expect near-term financials to remain under pressure.”

›Goldman Sachs reiterated its “Buy” rating and lifted its price target to $110 from $96.

In a note, analyst Alexandra Walvis wrote that F4Q revenue trends were better than Goldman Sachs’ expectations with the company returning to currency-neutral growth in China and posting “healthy (and accelerating)” online growth of 79 percent in Q4. She also wrote that while earnings were below expectations due to aggressive markdowns to clear inventories and one-time bad debt expense, “we believe NKE’s strong brand and aggressive inventory actions will prove to reset margins quickly and return the business to a more sustainable long-term algorithm.”

Walvis said she was also encouraged by Nike’s plans to accelerate its digital transformation as Nike set a new sales target of 50 percent of sales from digital, up from 30 percent previously and set a reorganization calling for an increased focus on women’s and apparel product and better integration of technology. Walvis wrote, “On balance, while we acknowledge that COVID-19 will continue to weigh on sales and margins particularly in F1Q, we continue to see NKE as a best-in-class growth asset with long-term sales and margin tailwinds.”