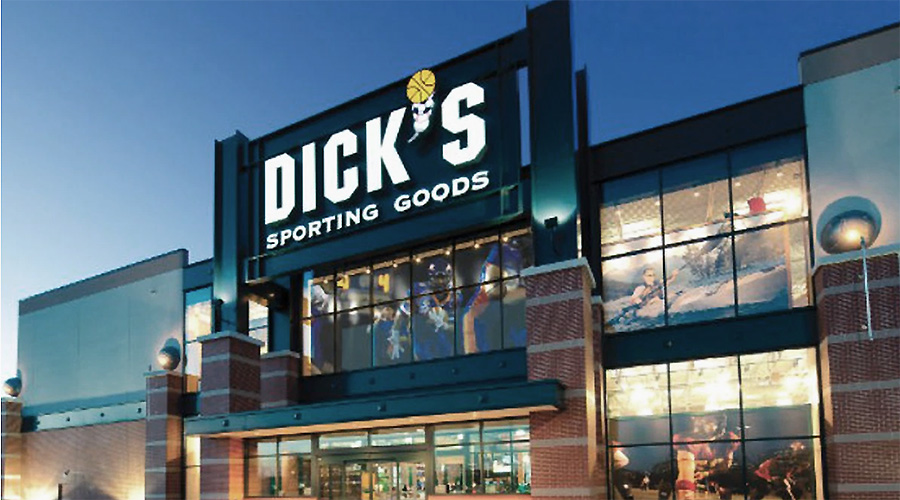 Shares of Dick’s Sporting Goods fell 4.1 percent Tuesday despite the retailer reporting third-quarter results that crushed analyst estimates. The decline was attributed to conservative Q4 guidance and concerns over Dick’s losing momentum in 2022. Most sell-side analysts remained bullish on the stock and expressed confidence Dick’s will be able to overcome supply chain challenges and brutal comparisons in the quarters ahead.

Highlights of the 2021 third quarter include:

The following is a synopsis of analyst views on the quarter and Dick’s outlook.

»Barclays maintained its “Overweight” rating and slightly raised its price target to $174 from $173.

“DKS continued to ‘comp the comp’ in 3Q21, improving upon last year’s sales and margin,” wrote Adrienne Yih in a note. The analyst believes improved sales, margin, and ROIC should be sustainable but suspects investors will focus particularly on the margin rate in the coming year.

Yih wrote, “We believe the investor debate remains focused on how much margin will be retained in FY22, but we can’t help but wonder what the catalyst for change will be to ‘give back’ margin to FY19 or even FY20 levels. Inventory is likely to remain tight industry-wide at least through the first half, limiting promotional activity, coupled with a more profitable e-commerce channel, price increases and a stronger assortment of products with a growing mix of accretive vertical brands, which in our view are likely to offset first-half pressure from freight inflation and wage headwinds. Consumer demand remains strong, and even with lapping stimulus, high-end consumers are in a position to spend with rising wages and unlocking still healthy savings rates. With continued flexibility to reinvest behind the business and return capital to shareholders through share repurchases, coupled with a strengthened market position in the fragmented U.S. sporting goods category as suppliers consolidate channel partners, we view share weakness on earnings as an attractive buying opportunity.”

Jim Duffy wrote in a note, “Transformational initiatives are encouraging, most notably, ecommerce competencies and scale (margins match corp. average), tighter vendor collaboration (particularly with NIKE), and balance sheet optionality. This said, we remain mindful that the combination of stimulus, catch-up spending in team sports, and tight inventory supply have been a powerful elixir to full-margin consumer demand (note: 24ppts. of the 40 percent growth vs. 3Q19 from higher ticket). We remain guarded on durability of average ticket and margin and therefore valuation. Our FY22/FY23 estimates call for y/y declines in revenue and EBIT margin though revenue still 32 percent/36 percent above FY19 levels underscoring share gains. We are raising our 12 mos. TP to $130 from $126.”

»Williams Trading reiterated its “Buy” rating and lifted its price target from $170 to $180.

Sam Poser wrote, “The huge 3Q21 beat continues to illuminate the fact that the work done at DKS in 2020 has created a larger, and more loyal customer base than it had prior to the Covd-19 crisis, due to greater investment in its people, than its competitors. Further, omni-channel execution, such as curbside pickup, have led DKS ecommerce operating margin to be in-line with the company total. The 3Q21 operating margin was 1200bps higher than in 3Q19. DKS is on the good list of most, if not all, key vendors. As such, DKS is getting key product well in a more timely manner than competitors, and will continue to do so into 2022. Management said that 4Q21 sales are off to a good start, and that the increased guidance (which was well above consensus) was conservative.”

“The key to the stock from here is where FY’22 EPS settles. In the near-term, the bear case could be difficult to disprove,” wrote Simeon Gutman in a note.

He noted that Dick’s topline momentum is beginning to moderate with 35 percent two-year stack gains in the third quarter below the second-quarter’s two-year stack gain of 40 percent. Gutman also said the streak of highly positive EPS revisions is likely to slow, although he also said fourth-quarter guidance appears conservative.

“The Sporting Goods category could also shrink in FY’22 (our reversion model suggests negative HSD’s), in which case bulls may be hesitant to step in until the FY’22 EPS picture becomes more clear. We think the landing for FY’22 EPS could be softer than expected (we model $11 in EPS) as 1) FY’21 EPS likely rebases higher (~$15-16), 2) DKS continues to gain share in its core categories and 3) margins are more resilient.”

»Wedbush increased its target price to $155 from $150 while reiterating its “Outperform” rating on Dick’s.

In a note, Seth Basham said that while the quarter’s performance “crushed” sell-side consensus expectations, Dicks’ guidance ‘implies a sharp slowdown in comps and margin expansion in 4Q21, unnerving some investors and creating a buying opportunity.”

Wedbush sees the implied flattish comp guidance in 4Q21 as “conservative” following the comp gain of 12 percent in the third quarter, Dick’s officials’ comments that the fourth quarter is off to a “strong start.” and inventories appearing relatively well-positioned.

Looking further out, Basham noted that Wedbush’s recent big-ticket consumer spending outlook survey indicated at least flattish big-ticket sporting goods category growth in the next 18 months, which would be modestly better than consensus forecasts for a mid-single-digit decline for Dick’s in 2022. Wrote Basham, “We believe that most sporting goods categories have ‘re-baselined’ meaningfully higher vs. pre-COVID sales levels due to a fundamental shift in consumer behavior with a bigger emphasis in health and fitness, participation in outdoor activities and a far greater propensity for athletic apparel and athletic lifestyle products. At the same time, DKS is positioned to continue winning market share through its merchandising, assortment, experiences and service improvements—its transformational partnership with Nike is a case in point, driven by CEO Lauren Hobart.”

Robby Ohmes wrote in a note, “We reiterate our Buy rating as we believe DKS’s category demand & profitability have been reset at higher levels. Importantly, we believe +DD EBIT margin is sustainable into 2022 and beyond given: (1) significantly higher profitability of e-commerce channel which is now in line with total company op. margin; (2) expansion of differentiated product from vendors, which are less susceptible to promotional pressures; (3) opportunity to leverage rent expense; (4) favorable mix shift given growth of vertical brands vs. reduction in lower margin hunt (1000 bps lower than comp. avg.); and (5)  more “granular” promotional strategy driven by enhanced data science capabilities.”

Analyst Michael Lasser said Dick’s is on a path to generate a 16 percent operating margin in fiscal 2021, up from 5 percent in fiscal 2019 with notable improvement in e-commerce profitability and merchandise margins. Lasser wrote, “Notably, we think that DKS has established a higher base of earnings, supported by its +10 mm new customers and refined promotional strategy.”

However, Lasser noted that bears are concerned that the sporting goods category “is vulnerable to wallet share shifts” and a return to office risks seeing people reduce their outdoors activities and shift spending toward formal wear and away from casual wear. Lasser wrote, “In light of the uncertainty, we believe DKS offers a balanced risk/reward.”

Paul Lejuez said the while Dick’s significantly raised its outlook, “guidance still looks conservative and assumes a meaningful deceleration in trends in 4Q21 (despite strong YTD performance against tough comparisons).”

While some incremental freight costs are expected for the fourth quarter, positives include promotions expected to remain at historically low levels and a “very strong” golf category. Fitness category growth has slowed but is still well ahead of 2019 levels.

Wrote Lejuez, “We believe DKS is a fundamentally changed business coming out of the pandemic, underscored by the strength in 3Q, with the ability to sustain a LDD EBIT margin over the long-term. With shares trading at an F22E EV/EBITDA multiple of just 6.5x, we believe the risk/reward is still very favorable for this category leader in the sporting goods/athletic sector.”