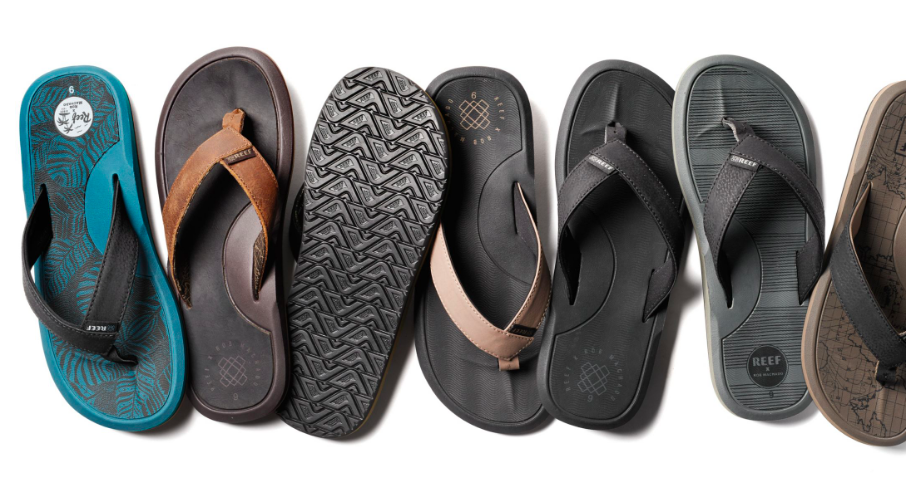 While acquiring Icebreaker and Altra this year amid stepped-up efforts to “reshape” the company’s portfolio, VF Corp. on Thursday reached an agreement to sell Reef, the surf-inspired sandal brand, to The Rockport Group.

Reef will operate as an independent global brand under The Rockport Group, and will maintain the company’s Carlsbad, CA, headquarters.

For VF, the sale marks the first sell-off of a brand that had been part of the company’s Outdoor or Active coalitions that has driven the company’s growth for the last two decades. VF’s primary outdoor and active brands are Vans, The North Face and Timberland.

Founded in 1984 by two brothers from Argentina, Fernando and Santiago Aguerre, with a focus on surf travel and beach culture with a “Beach Freely” motto, Reef was acquired by VF in 2005 for $187.7 million. Reef had sales of $75 million in 2004.

VF had aspirations to develop Reef into a major lifestyle brand with a wide range of sandals and close-toe footwear offerings as well as a sizeable apparel offering. But the surf and action sports market underwent a sharp downturn underscored by the struggles of Billabong, Quicksilver and others.

In the company’s latest quarterly filing, VF noted that management further commenced a strategic assessment of Reef’s goodwill and trademark value on May 26, 2018 and no additional impairment action was taken. For goodwill, the estimated fair value of the reporting unit was found to exceed the carrying value by 16 percent. The estimated fair value of the trademark exceeded carrying value by a significant amount.

The remaining carrying values of the goodwill and trademark at the May 26 testing date were $48.3 million and $74.4 million, respectively. The impairment analysis assumed modest growth in the wholesale channel driven by new product offerings and door expansion with existing and new customers as well as modest growth in the e-commerce business.

The sale of Reef comes as Vans, acquired in 2004 and reaching many of the same independent channels as Reef, has seen explosive growth over the last decade. In 2017, Vans surpassed The North Face to become VF’s largest brand, and VF last month set a goal for Vans to reach $5 billion in revenue by 2023

The sale of Reef also comes as VF announced earlier this year plans to move the company’s headquarters from Greensboro, NC, to Denver, CO, in early 2019. The North Face, JanSport, Smartwool, Eagle Creek and Altra are among VF’s brands set to relocate.

But the sale of Reef also aligns with the company’s five-year growth plan set in 2017 that included a “disciplined reshaping of the brand portfolio to better position the company for long-term success in a quickly changing business landscape.” The changes included both the acquisitions of Williamson-Dickie, Icebreaker and Altra brands as well as the divestitures this year of Nautica and last year of the Licensed Sports Group, including the Majestic brand. In 2016, VF sold the company’s Contemporary Brands Coalition, which included 7 for All Mankind, Splendid and Ella Moss.

VF’s Chairman, President and Chief Executive Officer Steve Rendle said in a statement, “Reshaping VF’s brand portfolio to deliver sustainable, long-term growth and superior returns to shareholders remains our top priority. Today’s announcement is another step toward delivering on the commitments outlined in our multi-year business strategy. We are pleased to have reached this agreement with Rockport. The Reef brand is an iconic, beach lifestyle brand, and Rockport is well-positioned to guide its next phase of growth.”

In a note to investors, Jim Duffy at Stife  said the move to sell Reef fits with VF’s stated goal to reshape the company’s brand portfolio.

“Reef is a smaller brand in the Active segment, and the proceeds can likely be repositioned to support VF’s largest growth opportunities and return capital to shareholders.”

He noted that the smaller brands in VF’s portfolio tend to be overshadowed by the contributions of the big three brands: Vans, The North Face and Timberland, and Reef had not been called out as a quarterly driver since 2015.

With VF at the recent Vans-focused Investor Day indicating that Vans will likely contribute nearly half of VF’s profit in fiscal 2029, Duffy said Stifel sees “a focus on the larger and faster growing opportunities as the highest value use of capital” for VF.

Duffy added, “VFC has a track record of savvy M&A, and we would be surprised to learn Reef sold for anything less than fair value.”

For The Rockport Group, the acquisition of Reef will help further diversity the business beyond Rockport, best known for the company’s men’s boat shoes, loafers and walking shoes. Rockport Group also owns the Aravon, Dunham brands and the Cobb Hill footwear lines.

Rockport Group said the company emerged from proceedings with the company’s balance sheet largely deleveraged and with significant capital available for acquisitions and future growth.

Ribatt said of the Reef acquisition, “Reef is a powerful brand with deep authenticity and an incredibly loyal customer base. We are excited to work with the strong leadership team that has been guiding Reef through its brand evolution and resurgence. We believe in the team’s growth plans across consumer, product and geographic expansion.”