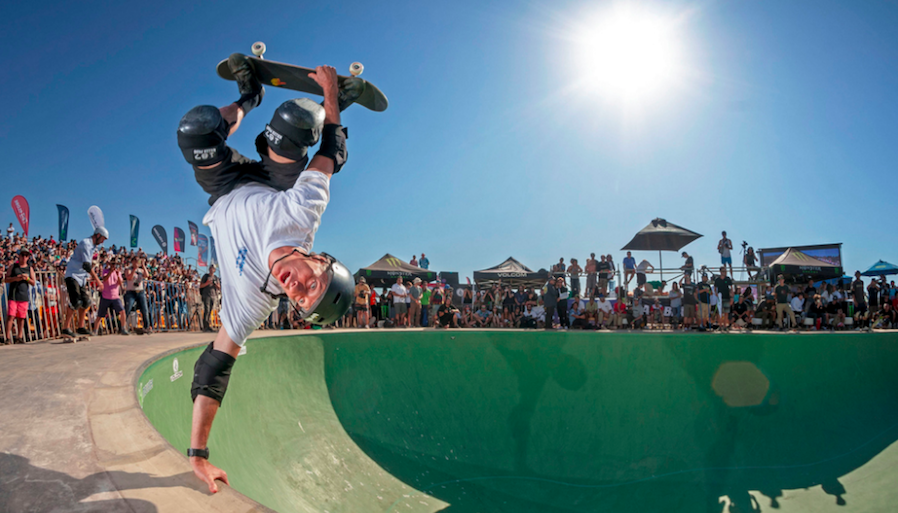 At a Chase seminar in New York City, Tony Hawk described how the perseverance that he leaned on in becoming a skateboard legend has been equally critical to his success as an entrepreneur.

Hawk began his presentation by joking, “I’m 50 and a professional skateboarder and those are words I thought I’d never speak in my life.” But Hawk was largely addressing a room full of small business owners to talk about his own experience as a successful small business owner. The event was timed to the launch of Chase’s Ink Business Unlimited Card.

Hawk’s initial reign as a star skateboarder was “relatively short lived” in the late 80s, and he described himself at the time as “young enough to think I was invincible and that the income was never going away. But that changed very quickly and very harshly in the early 90s,” when the sport’s popularity went through a quick down-spin.

He nonetheless decided to start a skateboard company, Birdhouse Projects, which he said “seems like the stupidest and most risky thing I could do.”

During the first four years of Birdhouse Projects, income “was relatively grim” and business success was uncertain, with the company relying on a “skeleton crew” to get established.

“I’d say in the first four years we were barely turning a profit,” said Hawk, “We were just scraping by on the salaries that we assigned my partner and I. I was eating relatively cheap food to put it lightly but all along we wanted to follow through with this dream of having a skate brand.”

Hawk also realized that starting a business was “not easy” and he had a lot to learn.

Hawk considers one of his smartest moves was committing early on to embracing the core business tasks, such as accounting, retailing knowhow and production, and not “just the fun stuff.” Said Hawk, “As boring as that seemed in my early 20s, it benefited me later because I understood how to talk the talk and walk the walk.”

Prioritizing his time was “probably the biggest challenge” in starting his business, particularly as a young father at the time still looking to skate at an elite level. Committing to a schedule ultimately made him more efficient with the sport. Said Hawk, “To focus my energy and my skating creativity to a certain time frame of the day actually helped me be more productive because I had to fit it all in if I wanted to accomplish something. It had to be in that exact time frame.”

The business likewise benefited from an improved focus on time management, such as hitting key video production and launch deadlines. Hawk added, ”It actually helped us be more productive in the end, even though you’re under that gun and feeling the pressure.”

Hawk and his partner, Per Welinder, knew that skateboarding was cyclical, with the sport having taken off first in the seventies, then cooling down before becoming popular again in the eighties. With the sport at the “tail-end” of its eighties run at the time of the launch, Birdhouse initially benefited from being able to secure inexpensive advertising, such as back covers of skate magazines for $500, while the business partners hoped for a comeback. Said Hawk, “I felt like once this wave came back we would be riding it, and it did eventually, but it took a lot longer than we expected. We almost gave up a few times. But both of us were very committed to this project and to our passion for skateboarding.”

Hawk believes he and his partners dedication to the sport and the perseverance they learned over the years mastering the sport’s skills gave them the patience to endure the early challenging years.

“I think the way we got through those years was staying the course and not getting distracted because there were ways we could have easily taken our brand and went in a different direction with it,” said Hawk. “But that wasn’t interesting to me, and even if it might have been more profitable, it just felt like we were selling it out or we were diluting it. And so I felt really strongly that it was important to ‘stay and course.’ And ultimately, if things got really dire, we would have had to make that tough decision, but it was really about perseverance and that’s what I learned through skating, the value of perseverance.”

In 1998, Hawk branched out into his second business, the children’s skate clothing company, Hawk Clothing, because he and his siblings “could not find cool clothes for our kids.” But the breakthrough arrived with the launch of the Tony Hawk’s Pro Skater video game franchise in 1999, the same year Hawk became the first skateboarder to ever land a 900.

The Tony Hawk video game series has since become one of the most popular game franchises in history, and Hawk has been able to establish successful businesses with Birdhouse Skateboards, Hawk Clothing and the Tony Hawk Signature Series of sporting goods and toys, in addition to securing a wide range of licenses. He is also known for philanthropy work, including his own Tony Hawk Foundation, which helps to build skate parks in underprivileged areas.

As he began to achieve superstardom when skateboarding’s popularity increased in the mid-1990s, Hawk used his bigger platform to push for skate to be seen in a more positive light. At the Chase event, Hawk said he had always felt that skateboarding “was misunderstood in terms of [how] people always wanted to look at the outcast element rather than the skills of the skaters and the passions of the skaters and the perseverance that I felt we all had.”

In personal life, he noted that skateboarding has helped him push through the struggles of his business, and he has been vocal about promoting the life lessons the sport of skateboarding offers.

He added, “To be a successful skateboarder you’ve got to be determined. You’ve got to persevere through many, many failures. So that was something that I was never really afraid of in business, and I embraced those challenges and those failures that taught me a lot through the years, especially the early days of Birdhouse. I ultimately learned what my strengths were and I learned to embrace the challenges of the business.”

In answer to a question from the audience, Hawk acknowledged that being well-known has been a critical factor to his business success. But he also noted that while he might have been legendary to the skate crowd in the eighties and been “semi-MTV famous” at the time, he was not known “very much at all” outside of the sport when he was launching his brand.

He believes his celebrity is linked not only to his success in skating but his ability to stay connected to the sport for a long time. Hawk added, “The fact that I’ve remained through two cycles of skating’s popularity has helped me a lot, because even now there are dads that used to skate in the 80s who knew who I was then and now they’re skating with their kids who know who I am because of video games or because I’m on Nickelodeon or whatever that is. So that definitely helps. And had I not had the success at skate and the name recognition I’d probably be much more behind the scenes.”

Asked about mentors, Hawk cited Stacy Peralta, the legendary skater from the 70s who formed the seminal Bones Brigade skate team. Hawk first met Peralta in in his youth when he was riding for Dogtown Skateboards, the iconic skate brand from the seventies that ”went out of business very quietly without telling me.” Having broad knowledge of Peralta’s reputation in skate circles, the call from Peralta and invitation to join his team gave Hawk “a huge boost” of confidence. Hawk added that Peralta’s approach to promoting the sport of skateboarding has also “definitely stuck with me.”

Hawk added, “If anything, I’m trying to emulate him these days in terms of showing people the best of skateboarding and letting them get into it however they want.”

Asked about his leadership style, Hawk said he tries to lead by example, encouraging inclusivity and treating everyone fairly. But he said “working hard” is probably what he projects the most. Said Hawk, “I’m working 24/7.”

Ultimately, Hawk said his love of skating was the core driver of his business success, and he encouraged those in audience to do what they love.

Said Hawk of initial start in business, “I think through those days I realized that I just love skating and I would do it for free any day of the week, and eventually I went on to get paid more money than I would have ever dreamed. But it’s still something I would do for free every day. So that’s my definition of success. If you are truly doing what you love, the money is somewhat incidental. Yes, we need to survive, but the fact that you’re getting paid to do this thing that you would wake up and be happy doing every day, that’s living the dream.”

The full Chase session with Tony Hawk can be seen here.