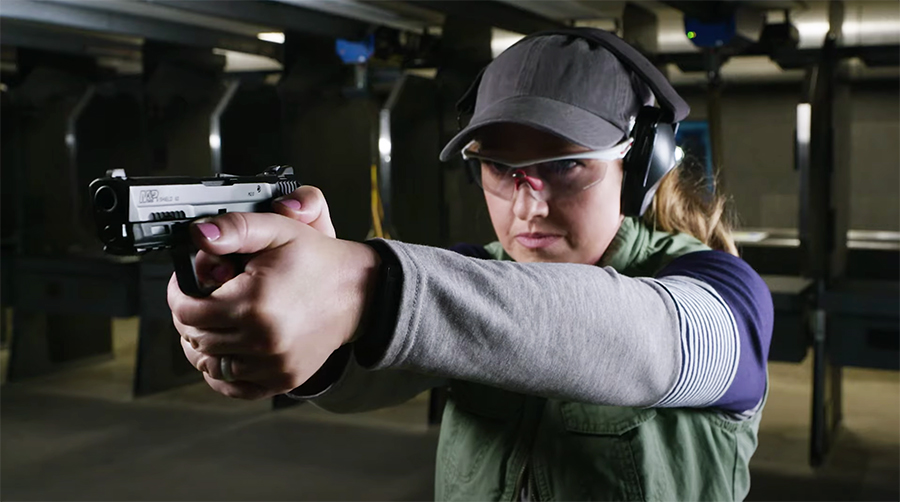 Smith & Wesson Brands more than doubled its revenue in its fiscal third quarter ended January 31 as the firearms maker easily surpassed the trend line in NICS background checks for the period and outperformed the market by focusing on operational performance, a flexible manufacturing model and communication with customers to meet needs.

“Our manufacturing and logistics teams produced and shipped over 623,000 units during the three-month period, an increase of more than 250,000 units over the prior-year period,” detailed company CEO Mark Smith during a conference call with analysts. “These numbers are certainly impressive and a testament to the ability of our dedicated operations team to leverage our flexible manufacturing model and deliver results in any market conditions.”

The impressive sales gain and unit growth exceeded even the 45 percent NICS background checks increase for all firearms types over the comparable timeframe last year.

For Smith & Wesson, total units shipped into the sporting goods channel during fiscal Q3 increased over 70 percent to 593,000 units, and the company’s SRA and distributor combined inventory levels declined by 28,000 units.

Company CFO Deanna McPherson offered more detail, stating, “Our team was able to generate an $8.9 million increase over our second quarter despite three fewer production days by implementing a three percent price increase that went into effect mid-November, capitalizing on a shift in NICS toward higher-priced products, and maximizing the small capacity increases that went into effect early in the quarter.”

Smith said the 2020 calendar year posted big growth for the overall shooting sports industry, evidenced by 21 million NICS checks for the year, a 34 percent, or 5.3 million, increase over the previous record set in 2016. He said the National Shooting Sports Foundation (NSSF) data indicates an estimated 8.4 million Americans purchased their first firearm last year. “The industry is not only growing but also diversifying, with women and minorities making up more than 40 percent of the overall purchases. This expanded base of new consumers and the increased general consumer interest in the outdoors and shooting sports bodes very well for the industry as we look forward,” Smith offered.

The CEO went on to say that January was the fifth largest NICS month on record, and the recently released February results indicate that while firearm background checks decelerated sequentially, he believes, this is due to several factors – from severe weather disruptions, delayed stimulus and tax returns, interest in shooting sports remaining strong, with daily rates of firearm permit checks flat sequentially, and 35 percent above February last year.

“We do expect, as we lapped the beginning of the pandemic in March, that NICS checks comparisons will become more difficult,” Smith conceded. “But we also believe that the expanded consumer base has fundamentally increased the number of participants in the market.”

McPherson said gross margin reached 42.6 percent of sales in fiscal Q3, up a staggering 1,460 basis points from the 28 percent realized in the prior-year comp period and 200 basis points above its second quarter. “This increase in the margin against the prior-year was due to increased unit shipments, combined with the elimination of promotional activity, a three percent price increase, and the mix shift to higher-margin products,” she said. “Margins were slightly negatively impacted by recall-related costs, increased depreciation on machinery purchases and compensation-related costs associated with increased headcount.”

Operating expenses were reportedly $2.4 million higher than the prior-year quarter due to increased shipping costs associated with increased volume, $3.3 million of increased profit-sharing expense, and a $500,000 donation to the National Shooting Sports Foundation. Increased volume related to customer allowances and increased stock and incentive compensation costs were more than offset by “reduced travel and other costs associated with the cancellation of the trade show season due to the ongoing pandemic.” The company also saw lower advertising costs and lower employee medical costs, likely due to “the deferral of elective procedures resulting from the pandemic.”

During the quarter, SWBI generated $60.3 million in cash from operations and spent $3.3 million on capital equipment, leaving $57.1 million in free cash. The company also spent $50 million to repurchase approximately 2.7 million shares of SWBI common stock at an average price of $18.26 and paid $2.8 million in dividends, resulting in the company ending the quarter with $59.7 million of cash and no bank debt.