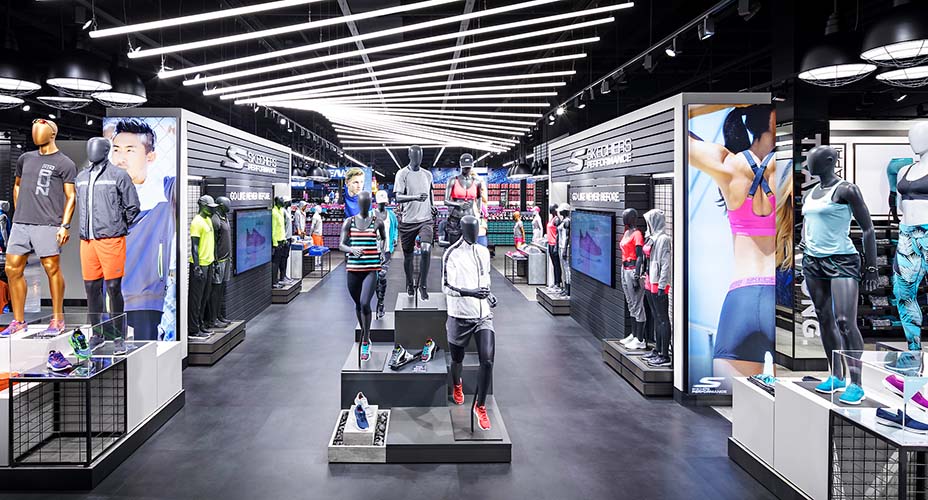 In the quarter ended June 30, earnings vaulted 66.0 percent to $75.2 million, or 49 cents a share. Skechers had guided for earnings to arrive in the range of 30 to 35 cents a share. Wall Street on average was looking for 33 cents.

Gross margins decreased to 48.5 percent from 49.4 percent as a result of promotional efforts to clear seasonal merchandise in select international markets. This was partially offset by higher domestic margins from improved retail pricing and product mix in the DTC and domestic wholesale businesses.

SG&A expenses were reduced as a percent of sales to 40.1 percent from 42.7 percent due to sales leverage while increasing 4.2 percent overall. Selling expenses decreased by $0.5 million due to lower advertising spend in the U.S. G&A expenses increased $20.7 million but decreased as a percent of sales by 160 basis points. The dollar increase reflected additional spending of $18.5 million associated with the opening of 39 additional company-owned stores, including 12 in the quarter, and $4.6 million associated with higher distribution costs in subsidiaries tied to increased sales.

The domestic wholesale business, which had been impacted by weakness and closures within the department store sector, performed better than expected with a decrease of 3.8 percent. That marked a sequential improvement over a decline of 11 percent in Q1, on improved inventory levels and product offerings. Said Skechers’ COO David Weinberg on a conference call with analysts, “We continue to believe it will be flat to slightly positive for 2019.”

In the domestic DTC business, the best increases were seen in women’s and men’s sport and work, men’s streetwear, BOBS, and GOwalk. In domestic wholesale, the biggest increases also came for men’s sport, streetwear and work lines. Added Weinberg, “Our chunky shoes from the Skechers to light collection continued to resonate with consumers in the U.S.”

Weinberg noted that the upward trend in the domestic DTC business in the quarter continued in July. He added, “Based on our account meetings in June, as well as this month, the same is also occurring with our domestic customers.”

In the international business, sales increased 19.8 percent for the quarter, representing 55.7 percent of total sales. The biggest drivers came from the UAE, who handles the majority of the business in the Middle East, Australia, New Zealand, and Indonesia, all of whom are distributors; India, Alpine Germany, Spain, and the UK within subsidiaries; and China, Singapore, South Korea, and Mexico within the company’s joint ventures.

At the quarter’s end, Skechers had 2,695 locations internationally, an increase of 109 in the quarter. Of these, 2,404 are owned and operated by international distribution partners, joint ventures and a network of franchisees.

Also at the quarter’s end, inventory was $855.6 million, a decrease of 0.9 percent since the year’s start and an increase of 4 percent year-over-year. The inventories were seen in line to support growth plans.

The guidance reflects expectations that international and DTC will continue to grow at a mid-teen and high single-digit rate, respectively, over the balance of the year, as well as the domestic wholesale business winding up flat to up slightly on a full-year basis.

In a note, John Kernan, at Cowen, said the flat to up slightly guidance implies that domestic wholesale will climb at a low double-digit pace in the second half, which he said hasn’t been achieved since Q417.

Asked about demand from wholesale partners, Weinberg said Skechers saw “a lot more demand and a lot more requests to move up deliveries in this quarter.” He noted that much still depends on the macro environment and whether another round of store closings arrives, but he added the company held “great meetings” with both domestic and international wholesale partners and the U.S. DTC business is poised to continue its recent growth rate. Weinberg added,” So, the U.S. business in and of itself will continue to grow, and we believe at an increasing pace as we go through the back half of the year.”

Cowen’s Kernan wrote in his note that the significant earnings beat was due to slightly better sales than expected and continued ability to see expense leverage. He wrote, “Based on innovation across a broad range of categories and management’s seemingly increasing confidence around margin trajectory in both international and domestic, consensus estimates look conservative into next year. Raising price target to $40.”

At Stifel, Jim Duffy called out the acceleration in DTC and international wholesale that continued into July and the overall guidance that implies double-digit growth for the remainder of the year. Duffy wrote in a note, “Revenue upside along with another positive surprise in SG&A leverage takes estimates meaningfully higher. We are highly encouraged by the combination of strong end-market demand and SG&A efficiency. While still mindful of necessary systems investments and process improvements to support the current scale of the business, we see double-digit growth and leverage capacity as deserving of a higher multiple.”

Susan Anderson at B. Riley FBR wrote in a note, “We continue to be impressed by SKX’s international outperformance, the turnaround in the domestic wholesale segment and strong DTC growth. We reiterate Buy and raise our price target from $38 to $44.”