Peloton Elaborates On Road Back To Profitability 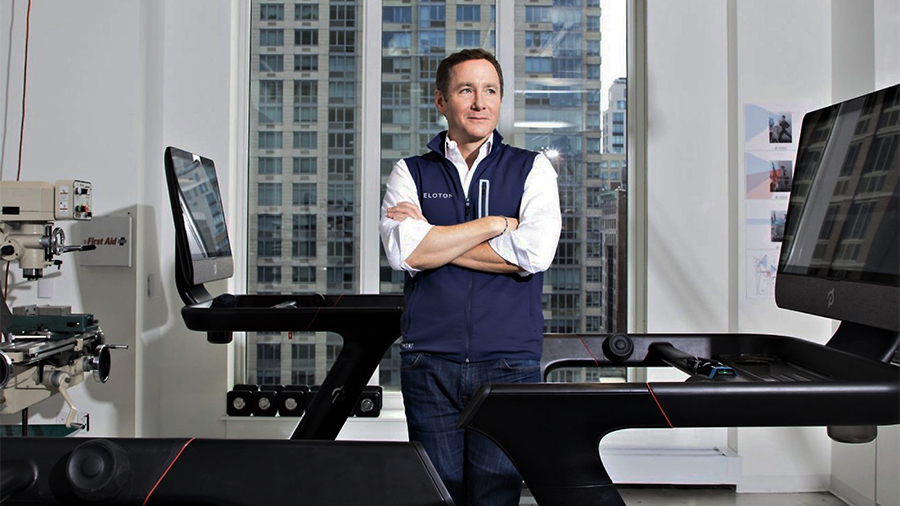 Following a cycle of bad news that has caused Peloton Interactive’s stock price to drop below its 2019 IPO price, CEO John Foley, shown above, late Thursday acknowledged that the company is adjusting its output and reviewing its cost structure but denied that production is halting.

Peloton also issued preliminary results that indicated its fiscal second-quarter revenue would be within its previously forecasted range.

In mid-morning trading on Friday, Peloton’s shares were trading up about 10 percent after falling 24 percent Thursday in response to a report by CNBC that said the company would pause Bike production in February and March and suspend production of its pricier Bike+ until June, citing internal documents, and that Peloton would not manufacture its Tread treadmill machine for six weeks beginning next month.

In a note sent to Peloton employees Thursday following the news report, Foley said the report was inaccurate.

“The information the media has obtained is incomplete, out of context and not reflective of Peloton’s strategy,” Foley wrote. He added that the company has identified who leaked the information and is “moving forward with the appropriate legal action.”

Late Thursday, the company, also in a press release, reported preliminary revenue in the fiscal second quarter ended December 30 of $1.14 billion, which was within the company’s guidance in the range of $1.1 billion to $1.2 billion. Peloton said it had 2.77 million connected-fitness subscribers, slightly below its guided range.

The company also reported an adjusted loss before interest, taxes, depreciation, and amortization of between $260 million and $270 million, a smaller adjusted loss in the range of $350 million to $325 million that it had been expecting.

In Thursday’s note to employees, Foley said that the company’s previously announced cost-cutting review would likely result in job losses.

“We’ve said layoffs would be the absolute last lever we would ever hope to pull,” he wrote. “However, we now need to evaluate our organizational structure and size of our team.”

On the positive side, he told employees that demand for the company’s online fitness classes was still strong, adding that the churn rate in the past quarter was 0.79 percent, meaning that most members were not overly canceling their monthly subscriptions. “In fact, just a few days ago, we recorded our highest ever number of daily workouts—over 2.9M workouts,” he wrote.

The company’s monthly net churn rate was 0.76 percent in the same quarter of 2020.

Peloton indicated that more details on the restructuring would be shared when Peloton released its quarterly earnings report on February 8.

In early-afternoon trading on Friday, shares of Peloton were trading up $2.54, to 10.4 percent, to $26.75 after dropping as low as $23.25 on Thursday. Shares of Peloton fell 76 percent last year after seeing its stock price surge the previous year due to the expected benefit from the pandemic.

Peloton has faced an abrupt change in fortunes over the past year. The stay-at-home economy led to a surge in demand for its connected-fitness products. By the end of 2020, it was facing complaints about delayed deliveries and hours spent waiting for customer service representatives.

To better manage the outsized demand, Peloton, in December 2020, agreed to pay $420 million to acquire Precor, Inc., one of the largest global fitness equipment manufacturers and announced plans in early 2021 to build a $400 million factory in Ohio.

In May, however, Peloton had to deal with an embarrassing recall of its Tread+ and Tread treadmills after reports of injuries and one child’s death linked to the equipment led to significant negative media coverage. In December, Peloton had to revisit the recall when an actor starring in HBO’s “And Just Like That” movie died after stepping off his Peloton bike.

By the fall, as consumers became more comfortable returning to out-of-home gyms, demand for Peloton machines had cooled. The company also faced growing competition, including less expensive bikes that could program using the Peloton app.

In late August, Peloton cut prices for its Bike by about 20 percent. In early November, in releasing first-quarter results, it slashed its forecast for the full fiscal year ending next June as demand for its exercise bikes and treadmills was slowing faster than expected.

At the time, Peloton forecasted its full-year revenue to come in between $4.4 billion and $4.8 billion, $1 billion less at the low end than it projected three months ago. Its holiday-quarter sales forecast also missed market expectations.

“Many of the modeling assumptions that predicted e-commerce traffic that we made in August were too optimistic,” said CFO Jill Woodworth on a call with analysts at the time. “Our baseline traffic forecast reflected our unchanged view of the growing consumer interest in Connected Fitness, our growing market share in the category, our leading brand awareness, and expected increase by word-of-mouth. However, it is clear that we underestimated the reopening impact on our company and the overall industry.”

Woodworth pointed out that while a price drop in its Bike offering by $400 led to conversion rates that exceeded internal forecasts, overall traffic did not meet initial expectations. Woodworth added, “We have also seen a richer than anticipated mix of Bike versus Bike+ further impacting our revenue and our gross margin expectations.”

Peloton said that it believes the company has the right capacity and is taking “significant corrective action” to improve profitability in future quarters. News broke earlier this year week that Peloton had started charging customers for setup and delivery for some of its products in part to mitigate inflationary pressures.

Several analysts have downgraded their price targets on Peloton or ratings on the stock in recent weeks as signs of slackening demand continued. Many appeared to be holding out until the February quarterly call before becoming more bullish on the company despite the crash in stock price.

One contrarian was Scott Devitt at Stifel, who, on Friday, upgraded the stock to “Buy.”

Devitt was encouraged that preliminary second-quarter results were in line with guidance and felt the stock had fallen far enough. He wrote in a note, “We believe the stock has over-corrected relative to underlying business conditions.” The analyst noted that Thursday’s closing price was below pre-pandemic levels even though the company had a significantly larger subscriber base and more customers signing up.

Devitt added that while Peloton’s fitness subscriptions of 2.77 million as of the end of the second quarter were slightly below Stifel’s estimate of 2.8 million and guidance from management, it is 289 percent higher than numbers reported in the same period last year.

Devitt still said he is “taking a conservative approach to the remainder of the year,” and he lowered his price target to $40 from $56 while reducing his financial forecasts for the fiscal third and fourth quarters until further evidence of stabilization in the business emerges.

At JP Morgan, Doug Anmuth reiterated its “Outperform” rating at a $50 price target. He had reduced his price target from $70 late last year.

The analyst wrote, “Despite the slowdown and challenges in forecasting post-pandemic demand, we believe PTON continues to have a strong brand and community, high NPS scores and strategic value.” He also said JP Morgan remains “bullish” on the long-term connected-fitness opportunity.

Anmuth also wrote that the slower near-term demand was largely anticipated, signaled by December traffic declines and higher than usual promotional activity. “Looking forward, PTON faces near-term demand uncertainty as it works to distance itself from pandemic pull forward and re-establish top-of-funnel traffic and leads as marketing returns. However, we believe slower traffic and demand are impacting the broader home fitness industry, not just PTON.”

Anmuth also wrote that while Peloton would likely slow production to support sustainable growth exiting the pandemic, a complete production halt is not expected. He added, “Looking forward, we continue to believe headroom remains in the L-T connected fitness opportunity across Bike Tread, and PTON should drive additional growth through commercial and international expansion.”

Anmuth was also pleased that EBITDA was better than guidance and Peloton’s stated commitments to improve margins and cost structure. He said moving to charge delivery fees should bolster gross margins, and shifting toward 3PLs should “significantly reduce” delivery costs as he estimates 1P delivery is likely two times the cost of 3P. Anmuth also cited other potential benefits to margins, including normalized marketing spend during Peloton’s fiscal second half, favorable freight contracts, as well as moves to reduce headcount and slow or close showrooms.

At Credit Suisse, Kaumil Gajrawala kept its “Neutral” rating and lowered its price target to $30 from $50. The analyst had downgraded the stock to “Neutral” on December 10.

In his note Friday, Gajrawala said the second-quarter preliminary results “were not as bad as feared,” and further indications of an increased focus on profitability were expected given the slowdown.

He wrote, “This is just the latest in the compounding negative effect on the brand: in our view, strategy has been shifting since as early as the Tread+ recall in August. Since then, the company has experienced price reductions, price increases, product delays (Guide, Tread+), and controversial third-party PR. Altogether, the reactive responses to various pressures create a “show-me” story for medium-term valuation.”

UBS analyst Arpiné Kocharyan in a note Friday noted said Peloton’s preliminary results did not include an update to FY guidance and he reiterated his previous contention that visibility into fiscal second half net additions to connected fitness subscribers is critical to the stock valuation. The analyst expressed concerns that moves to optimize cost structure and scale back marketing might overly weigh on subscriber growth.

Wrote Kocharyan in the note, “We believe FY subs growth could come in below now lower expectations. Additionally, we do not believe profitability for the back half is attainable, so while connected fitness subscriber growth remains the key factor driving EV to sales valuation framework for PTON, we believe investor focus on operating cash could bring the Peloton debate back to the question of profitability.”

Baird reiterated its “Outperform” rating at a $70 price target. The firm plans to reassess its profit projections and $70 target assumptions following the second-quarter report.

Analyst Jonathan Komp favorably called out the better-than-modeled FQ2 results and management signaling new daily records for workouts. He wrote in a note, “With efforts underway to improve gross margin and to pursue a more variable cost structure, we think the company is taking the right initial steps to address a bloated cost base. While time will be needed to restore investor confidence, current levels appear to undervalue PTON’s high-growth, high-margin, high retention subscriber base, with additional detail on restructuring the next potential catalyst.”