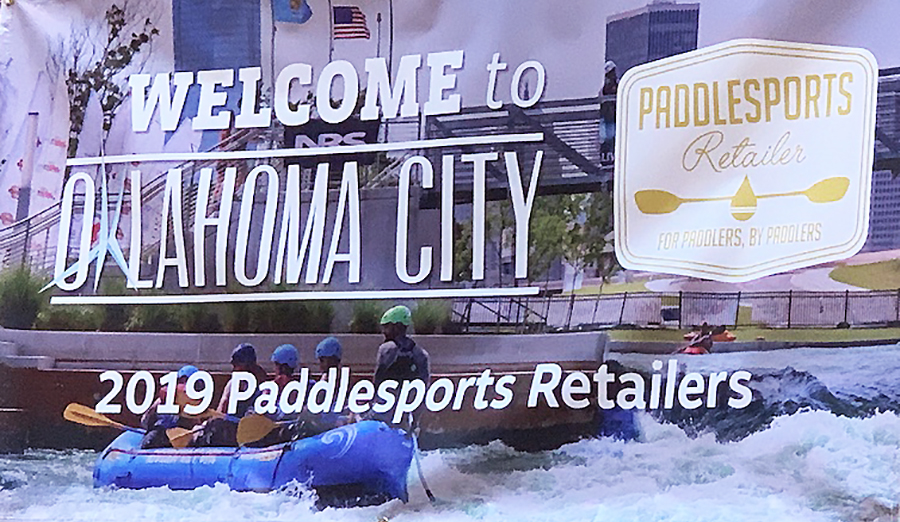 As uncertainty over the tariff situation swirls like a challenging eddy and industry trade shows face their own turbulence amid a changing marketplace, the paddlesports community has united in Oklahoma City en masse to showcase the latest canoeing, kayaking, SUPing and fishing products—headwinds be damned.

Paddlesports Retailer (PSR) officially began Sunday but truly kicks off Monday with a revamped demo day where attendees get to flaunt their own flatwater and whitewater paddling skills. That’s followed by two and a half days of a trade show exhibition dedicated to all things paddlesports.

“By paddlers, for paddlers” is the tagline that PSR’s creators coined when they launched the event in 2017 in Wisconsin. Now in its third year—and second in Oklahoma City—PSR has unveiled some slight scheduling shifts but is feeling a wave of momentum while Outdoor Retailer downsizes to two shows from three. Click here for OR’s latest news.

PSR’s biggest change includes both the flat water and whitewater demos being held at RiverSport OKC whitewater park (see below for explanation), as well as a shortened third trade show day to allow for brands and buyers to return home earlier.

Prior to the show’s start, SGB spoke with Charles Conner, PSR general manager, and Darren Bush, show co-founder, about what to expect at this year’s event in addition to challenges facing the industry. Here’s what they shared.

Do you feel like Paddlesports Retailer has momentum going into its third year overall and second in OKC? If so, what’s driving that and what are the goals for the 2019 show? The show continues to grow. We’re up as far as the number of buyers, and Darren was answering questions on email in the airport from retailers asking if they could still attend. The hotel room block is up as well, so attendance is going to be great. As always, our goal is a show by paddlers, for paddlers. Our customers are the buyers, so if we can make it the best show for them, it will naturally be the best show for the vendors. We haven’t forgotten the vendors, however. PSR is the most economical industry trade show by far, and we continue to create ways for our vendors to keep expenses low by subsidizing freight costs, etc. The goals for the show is to make it better than the one last year. We’ll continue to listen for ways to improve.

Any format or scheduling changes we can expect this year and, if so, were those in response to attendee feedback? We definitely made changes to the demo day due to wind, and the venue will be more favorable for the flatwater portion. We made changes to the food and the festivities, and we’re all excited to see the buyers’ responses. We took a few hours off the third day, which will allow exhibitors to get out earlier so they can get on the road and get home for the weekend.

How would you gauge the health of the paddlesports specialty channel and what are its biggest challenges? We were all challenged by a cool spring, and retailers are cautiously optimistic (aren’t we all?). The manufacturers are probably overstocked due to canceled spring orders. One challenge we face are the downward spiral of price points for kayak-shaped objects you can buy at the lumber yard. That’s one reason we don’t allow container dumpers to exhibit at Paddlesports Retailer.

The specialty channel is always going to be challenged by box stores. If you can’t sell value, you cut price. To a box store, a kayak is just another SKU. To us, it’s our raison d’etre, and if we don’t share that enthusiasm with the customer, we’re not all that special, are we? Overall, PSR is a good value in that it allows specialty shops to see product you won’t find in a box. One of the benefits of being here together is to remind ourselves why we do this. Yes, we want to make a living, but we also want to make the industry great.

How well are brands coping with tariffs and will that again be a hot topic this year? You’d have to ask the brands that one. For boats, most of them are not affected by tariffs because they’re not made in China. The tariffs are hurting some clothing manufacturers for sure, but frankly, given the volatility of the political decision-making (or lack thereof), all the tariffs against China could go away tomorrow. One can only hope. As of this afternoon, Trump was saying he should have doubled the tariffs. Tomorrow, he may not remember what he said today.

What are some other business trends attendees should be looking for during either the demo or trade show portion of PSR? Seems like inflatable SUPs are growing like gangbusters, as the designers and manufacturers improve their product. Many of the inflatables have performance equal to hard boards. Customers are looking for special products, so should buyers.

From (almost) everyone I’ve spoken with, OKC is a great location with superb venues. What are the pros and cons of hosting the event there? There really aren’t any cons, except one—getting buyers to believe that OKC is actually a very nice town. I heard a lot of folks, buyers and vendors, say “Gee, I didn’t want to come here, but you know, it’s a nice town!”

OKC has great food (especially if you’re a carnivore), super friendly people and, of course, a demo venue that is without a doubt the best the industry has ever experienced. The Cox Convention Center and the rest of the venue is run by great people who work as partners in pulling off the show. They are proud of their town and want to show it off. OKC has broken ground on a new convention center that’ll be ready for us in 2021. It’s going to be a world-class facility.

Everyone is talking about the viability of trade shows these days—which ones to attend, which ones to avoid. What does Paddlesports Retailer offer that, say, other outdoor shows can’t? Quite a few things. First, the dates. Paddlesports manufacturers are not even close to the same timelines as the softgoods folks. We simply cannot do a proper showing in June, since most of us retailers are still working on last year’s models. Plus leaving the shop in June is a physical impossibility.

Second, the demo. OKC’s artificial whitewater course is a fantastic venue. It was such a great synergy to see all paddlesports in one demo. I remember at one point Eli Herbert was surfing a wave at the bottom of the whitewater channel in an open canoe, and as he pulled off, a tandem kayak jumped on the wave. An inflatable SUP followed. I would imagine it was the first time that has ever happened. Three different watercraft families; one wave.

Third, focus. We are very specific and vet every vendor to make sure they add to the show’s spirit and vibe. Specifically, we have turned down a dozen offshore manufacturers who do not have distribution in the U.S., because clearly they are not invested in the paddlesports community. We also find those vendors are most likely to steal IP from our existing vendors, and we won’t let that happen. While it may be in the show’s financial short term interest to shut up and take their money, we are in it for the long haul.