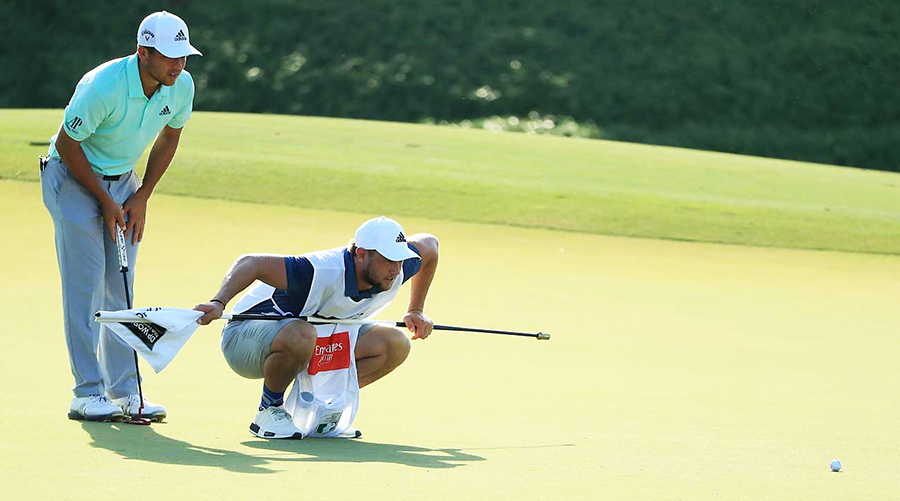 With double-digit growth in off-course golf participation, improved TV ratings, and a more diverse group of beginners coming to the sport, the National Golf Foundation (NGF) delivered a bullish outlook for the golf industry in its annual study. One encouraging finding was that on-course participation in 2018 marked its first measured increase in 14 years

The NGF’s 2019 annual Golf Industry Report represented only the second edition of the study.

On a media call Wednesday, Joe Beditz, NGF’s president and CEO, noted that on-course participants grew 1.7 percent to 24.2 million from 23.8 million in 2017. On-course participation had been trending flat or down slightly since 2004. Beditz noted that while the slight gain is within the range of a statistical error, “it sure is nice to see it on the upside.”

Overall, total golf participation, including off-course-only participation, grew 4.4 percent in 2018 to 33.5 million from 32.1 million and has been showing slight gains in recent years due to interest in increasingly popular off-course forms of the game such as Topgolf, Drive Shack and indoor simulators.

Overall, Beditz said NGF is convinced that the growth in off-course participation isn’t taking golfers away from on-course play. Research for TopGolf shows that the majority of TopGolf’s users are in the millennial age, only half play on a golf course yet the majority are interested in playing on a golf course. He said off-course experiences such Top-Golf are “exposing more people to the euphoric feeling you get from golf. We think this will only whet people’s appetite for the game.”

But Beditz was equally encouraged by the stabilization seen in on-course participants. While on-course participation remains below pre-Great Recession levels, they’ve “reached a support level” by coming in at about 24 million over the last few years.

The stability in core players was also reflected in a new “Golfer Dedication” measure developed by NGF that showed a core group of enthusiasts remaining highly committed to the sport. NGF explored how much on-course golfers enjoy the game, including asking whether they consider themselves “nuts about” or “hooked” on the game or view themselves as more “casual” or “fringe” participants.

The remaining 19 percent of “less dedicated” participants only played six rounds a year although 87 percent of them still indicated that they expected they would still be playing in two years. 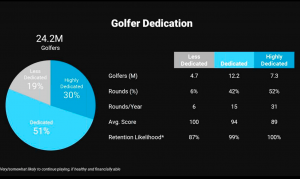 Still, NGF also revealed a number of healthy trends on those coming to the sport. The findings include:

In addition to golf’s 33.5 million participants, another 74 million watched or read about it in 2018, putting the game’s total reach at about 107 million — more than one-third (36 percent) of the U.S. population. This number is up 10 percent from a total reach of 98 million in 2017, which NGF said was likely attributable to Tiger Woods’ return to competition and a host of emerging stars throughout professional golf. Tournament television ratings were up in the neighborhood of 30 percent in 2018, again with increases directly in line with Woods’ participation.

Engagement with the sport also extends to golf-related products. The market for golf clubs and balls was $2.7 billion in 2018, up about 6 percent from the previous year.

On the downside, rounds-played dipped 4.8 percent in 2018 to 434 million, although the decline was directly tied to heavier precipitation levels than normal across the country during the busiest months for golf. Beditz said the weather particularly impacted a northeast section of the county, which represents only about 20 percent of the land area of the U.S., but 48 percent of facility supply and 44 percent of total rounds played. Said Beditz, “It hit us where it really hurts.”

On the supply side, the course closures that have outweighed new openings since 2006 continued as part of an ongoing correction within the industry.

A total of 198.5 18-hole equivalent courses closed throughout the U.S. in 2018, while 12.5 new 18-HEQ opened, resulting in a net reduction of 1.2 percent in the market. Among the highly-regarded new openings were Mammoth Dunes and the 17-hole Sandbox par-3 course at Sand Valley Resort in Wisconsin; Sage Run at the Island Resort and Casino on Michigan’s Upper Peninsula; the Ohoopee Match Club in Georgia; and Ozarks National at Big Cedar Lodge in Missouri.

Development activity remains concentrated on renovations rather than new construction, with owners and operators investing more than $3.5 billion in major renovation projects over the past 13 years. As a result, remaining golf facilities, in general, are in stronger financial health and are actively seeking to improve their overall quality.

Beditz said this balancing of supply and demand is one that many course owners have taken advantage of thanks to soaring real estate values, often choosing to sell their property as part of a planned exit strategy.

Beditz said the course supply correction is having a negligible impact on participation as most golfers head to nearby courses if one nearby is closed. 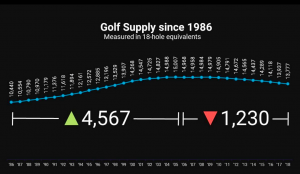 NGF expects a further contraction in courses by 1 to 1.5 percent to continue for another few years.

NGF noted that the big-picture view of golf’s most recognizable metrics — approximately 15,000 facilities, 24 million golfers and in the neighborhood of 450 million rounds-played — is strikingly similar to 20 to 25 years ago just before Tiger Woods came on the scene to elevate the popularity of the game to another level.

Asked about the potential impact of Woods’ first major win in 11 years and first Masters win since 2005, Beditz said Woods’ return to competitive play can only be favorable to the industry. His initial run caused a “definite spike in participation” and many core players today were inspired to embrace the sport due to his past accomplishments. Beditz also pointed to the “big impact” on viewership that was already seen last year by just his return to competitive play. Said Beditz, “Without a doubt, his return is not harmful to our chances to grow golf participation. In fact, it will be nothing but positive and we wish him the best of luck.” 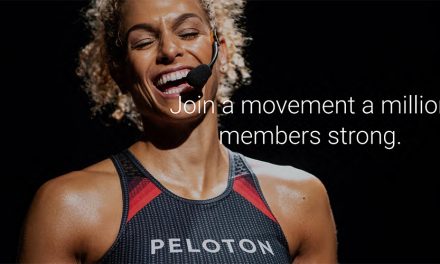 Can Peloton Pull A ‘Netflix’ On Gym Memberships?