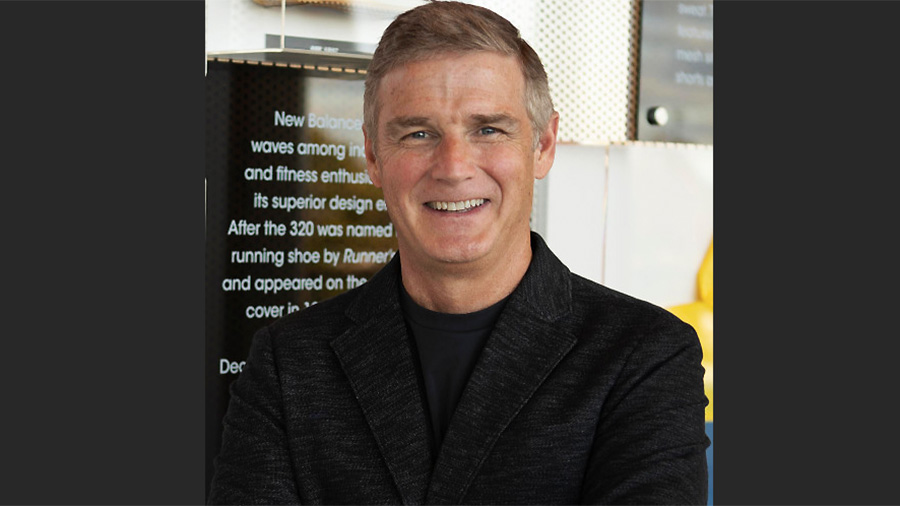 At SFIA’s Trends & Insights conference, Joe Preston, New Balance CEO and president, said his company’s sales are on a path to climb “about 30 percent this year” and move past 2019 levels as it strongly recovers from the pandemic. The brand also continues to pack momentum in the future.

“We’re adding almost a billion back to the top line this year,” said Preston. “And most importantly, our trajectory feels strong right now. We are experiencing 25 percent growth in virtually every region around the world, which I think says a lot to the industry itself and the sector that we participate in that is healthy and also to our teammates from New Balance around the world that have worked together and put us in this position to grow.”

In a fireside chat with Tom Cove, CEO and president, SFIA, Preston discussed the impact of the pandemic but initially shared his journey with New Balance.

He joined the brand as a senior product manager, running and lifestyle, in 1995 after working in the CPG industry. At the time, New Balance was a $150 million company and had nearly gone bankrupt five years prior. However, it was an opportune time as the brand soon began successfully expanding across multiple categories, including the “Dad Shoes” that are today a fashion play with new collaborations and colorways. Said Preston, “Those cross-training shoes were worn by college kids who are a lot older now, which tells you about the loyalty of the brand.”

New Balance also found success with performance running silhouettes and in trail running, “which allowed the brand to get younger overnight,” according to Preston. By 2000, the brand had become a billion-dollar business in the U.S

International Growth Drivers
In the past two decades, much of New Balance’s growth came from overseas. Preston said that after Jim Davis acquired New Balance in 1972, he spent the next 15 years establishing the brand worldwide.

“Japan, for example, was always a strong region for us, and it was the lighthouse for the brand in that region,” said Preston. “Today, about one-third of our business is in the U.S., and two-thirds is outside the U.S.”

Beyond Japan, New Balance has a strong foothold in Korea and China and a “very strong business throughout the Asia Pacific and Europe.”

For the most part, the international growth has been helped by partnering with the right distributors. Preston said, “These were fellow entrepreneurs, if you will, that we partnered with, and many of them were partners of ours for decades. They were small companies that developed our brand and did a great job representing ourselves.”

Also helping the company’s international push was the strong appeal with younger consumers than its home market. Said Preston, “In the U.S. when we grew to a billion, we were young, but then we flatlined for quite some time, and our brand demographics just got older and older. A very loyal business, so we didn’t suffer a major decline, but our growth was not robust because we could not capture the younger consumer in the U.S. That was not the case outside the U.S. The growth that we’ve experienced outside the U.S. has come from a younger customer.”

Another benefit to international growth from a go-to-market perspective is that many emerging markets are “DTC-dominated,” with the brand having 2,500 stores in China and about 500 in Korea. That enabled New Balance to showcase the brand and develop its apparel business fully.

Before becoming CEO in 2018, Preston had a direct role in steering its international growth, becoming vice president for the Asia Pacific in 2002 and overseeing the overall international segment starting in 2005. He said, “That period if I look back on my career, was instrumental. It allowed me to learn about new cultures around the world and how businesses operate differently everywhere. And it also aided me in how we handled COVID.”

COVID Impact
On the impact of COVID, Preston sees a lasting benefit from the heightened interest in activities such as running, walking and hiking caused by the pandemic. He said, “I am bullish on intermediate and long-term trends of the athletic footwear and apparel space.”

He sees a “reconciliation” in consumer purchasing patterns across sectors as people return to former pre-pandemic routines, but he expects the sporting goods industry to see a long-term boost. Preston said, “Once people get the outside experience, just walking or running, and what it can mean to the way they feel, I think that will be sticky. That’s a very positive trend for the industry in general.”

The mental health benefits many individuals experienced as they discovered or re-engaged with physical activities will help form habits, he believes. Preston elaborated, “I do think people have found product within the industry that we’re in and are using it to try to achieve balance in their life. We recognize that, and we just launched a series of vignettes called “Beyond the Run,” which is going to allow us to communicate the benefits of running beyond a PR (personal record), which is the mental wellness element of it.”

Preston said the pandemic experience has accelerated the digital shift in retailing. Said Preston, ‘If you think of the retail disruption that has been taking place for the past decade, all fueled by the digital revolution, that accelerated forward. During the first five-to-eight months of COVID, we had effectively 100 percent of the front end of the company working on digital instead of brick and mortar. They were working on the digital, not from a DTC perspective but enabling our retail partners to capitalize on digital sales. That in and of itself has allowed us to leapfrog. I think every retailer today is in stronger shape than they were before COVID. Obviously, not everybody, but many of them. They have accelerated their capabilities on the digital side, and many of them are financially healthy. I think that bodes well for the intermediate.”

Internally, Preston said New Balance has accelerated collaboration by being forced to work virtually to a large degree. Said Preston, “The silver lining of COVID for us is that we have been communicating and collaborating like never before. We have effectively changed the way we operate. We brought the agile methodology into our office environment, and the long and short of it allowed us to identify these key strategic initiatives and put together 90-day sprints with small teams. Think Seal Team Six. They have the authority and the accountability to develop action plans. And it’s allowed us to raise our growth ambition.”