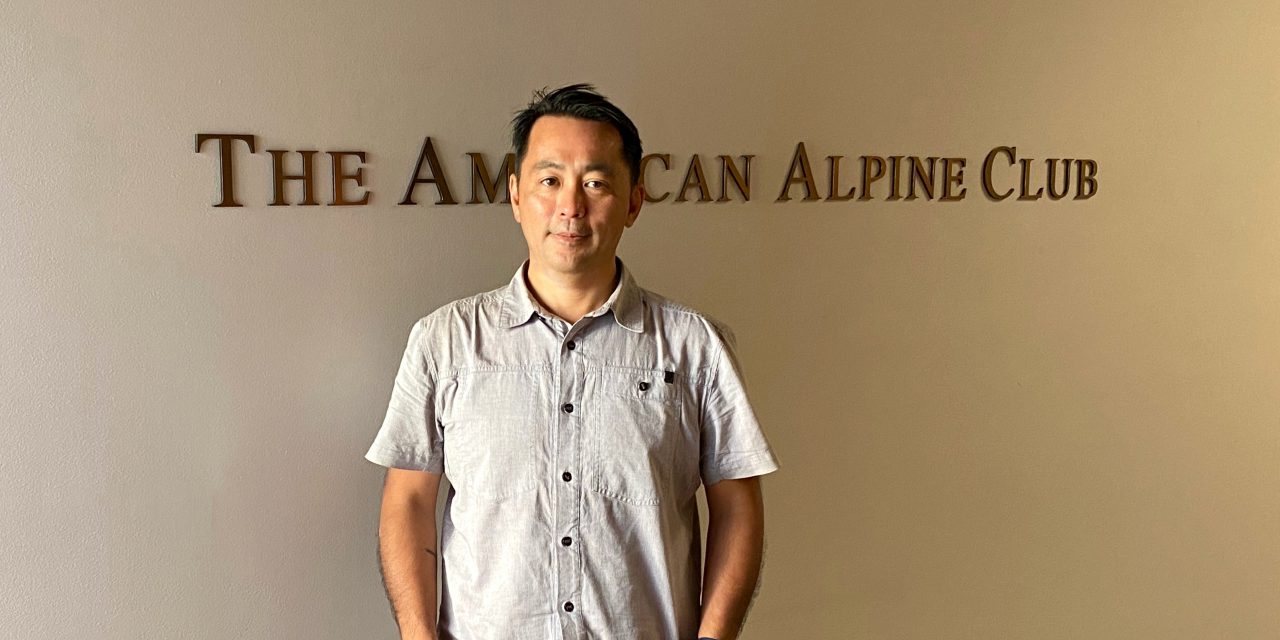 On August 3, the American Alpine Club (AAC) named Mitsu Iwasaki as its new CEO, replacing Phil Powers, who retired in 2019 after 15 years at the helm. The former executive director of Portland, OR’s Mazamas climbing club, Iwasaki also headed the Northwest Outward Bound School for five years and serves on the board of Big City Mountaineers. On the day he sold his house in Portland to move to the organization’s headquarters in Golden, CO, SGB Executive caught up with him to talk all things AAC.

Are you excited about your new position? I’m ecstatic. It feels surreal, still, leading such an organization. The AAC has broad and deep influence both within and outside the climbing community and is at an exciting juncture with an opportunity to build on the strong foundation put into place under Phil. It’s funny because in the ‘90s I applied for a job here, sending in my resume in hopes someone would reply. It’s been an iconic organization for over 100 years with so much opportunity today. Previous boards have done a great job building it from a few thousand members to more than 25,000 today. It’s ripe for us to do something great, and we’ve been handed the keys to doing it.

It sounds like running AAC might be a little different than heading up Mazamas? It will be a big difference. Mazamas is a 126-year-old regional club with 3,600 members. I was able to actually get out and see — and climb with — most of the members at our educational events and other outreach programs. Unfortunately, I don’t expect it to be that way at ACC; I probably won’t be able to see and meet most of our members. It’s a pretty significant difference. But AAC now has 17 employees and a $4 million budget, so it has a lot greater influence in the outdoor community and industry.

What are some of the priorities and initiatives you’re working on? I work for the board and haven’t attended my first board meeting yet. That comes September 12. But I want to ensure that the AAC stays healthy through the pandemic and that we continue to serve our members.

How has COVID affected the organization? Our annual dinner, climbing events and more have all been canceled. While we continue to reach our members virtually, we can’t climb with them, which is tough. Our revenues have also been affected, so we’re all making guesses at this point as to how things are going to shape up. But we’re still doing our education, community building, and advocacy work virtually.

How about the climbing community and industry? It’s been tough. When COVID first hit, it shut everything down. Now, climbing gyms are starting to re-open, but they’re not seeing the same revenue as before. The same holds true for guides — they’re starting up again with increased hygiene and PPE practices, but their profitability has been affected. Climbing clubs across the country have seen a significant decrease in revenue as well as they can’t do in-person education and foster community. It’s incredibly difficult.

I’m also concerned about climbing’s “gateway communities” — places like Terrebonne near Oregon’s Smith Rock — which are also suffering. A lot of rural counties in popular tourism areas have had high infection rates and have lost a lot of revenue. A lot of businesses in these small, rural communities also weren’t able to access PPP funds. And it’s not done yet. Will some of the businesses that have always supported climbers still be here after COVID? We’re going to try and support them as best we can.

Aside from COVID concerns, what are some of the major issues facing climbing these days? We have to protect access to climbing areas and all wilderness spaces, whether they’re climbing areas or not. We’re not partisan, but we do have a position in terms of protecting wild places. Many of our public lands are under threat and we need to fight to keep them that way.

Banding together in opposition seems to help? The climbing, and whole outdoor industry, is very fragmented; we are an $800 billion industry but we don’t show up in Washington, D.C., as one. We have different interests and strengths and don’t come together as much as we should to effect change in the federal government. And many companies tend to create their brands independent of others. I don’t see anyone building our political power 30-to-40 years out from here the way it should be.

Any other hurdles climbing is facing? Besides access and protecting public lands, we need to be better at promoting the gym-to-crag movement. About 7 million climbers go to gyms, but we’re not that good at the gym-to-crag transition. Some organizations are doing it well, but not across the country. There’s no real standard as to how volunteers ought to teach each other, so it’s hard from an education and community standpoint. It’s also expensive for consumers to make the transition gear-wise.

How is the climbing community in terms of issues like inclusivity? The majority of climbers are warm and welcoming, but there are some who display juvenile tendencies that aren’t necessarily inclusive. There are also eating disorders and other mental health issues that hopefully we’ll be able to start making part of the conversation. By its nature, climbing is an easy place to escape problems of the modern world, whether they’re mental health issues or others.

How can people help? Join your local club, the AAC and the Access Fund. My vision is to see every climber have a bumper sticker on his or her car from all three. And be an engaged climber. In my early days as a climber in Yosemite Valley, I was just taking and not giving anything back. At the end of the day, get engaged. We have a “Send it to the Polls” campaign asking members to register and vote. We’re not going to tell anyone who to vote for, but just to be informed and to vote for protecting public lands and preserving access.