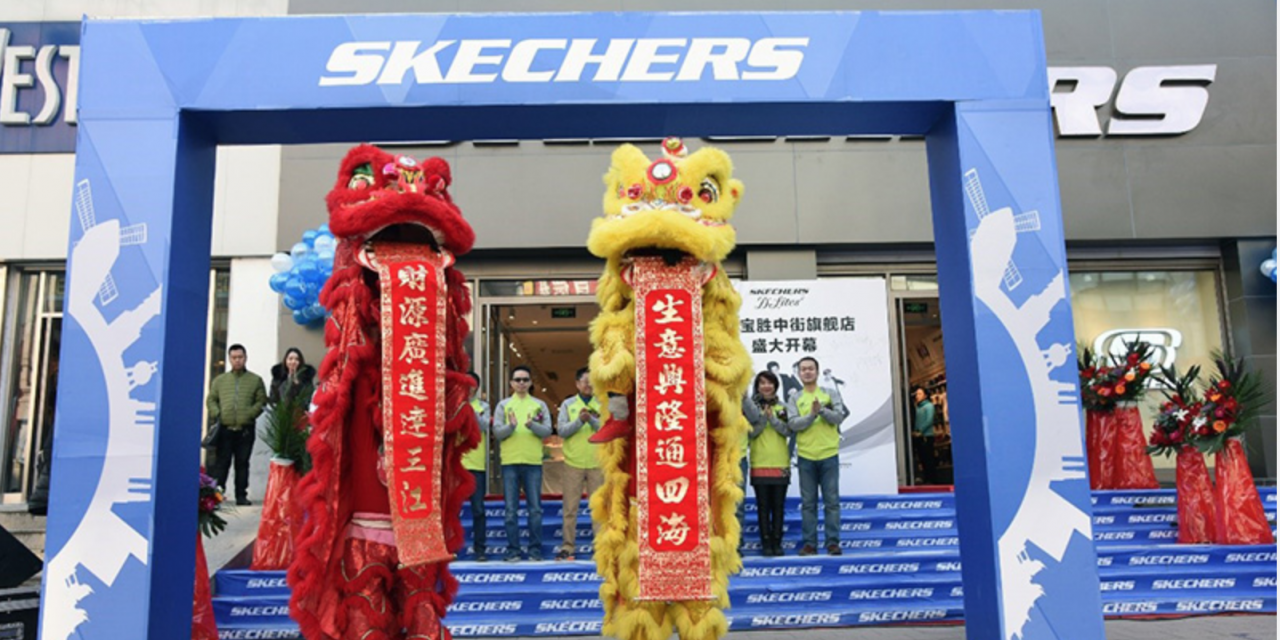 The company’s international sales increased 21.9 percent, or 25.7 percent on a constant currency basis, accounting for 58.8 percent of sales—the highest in the company’s 20 years of operation.

Skechers said its branding is gaining traction in key markets like China, where Skechers Q3 sales grew 21 percent on a constant currency basis, and Mexico, which transitioned to a joint venture earlier this year.

However, earnings per share of 67 cents, though from the year-ago quarter, fell short of estimates by 2 cents, due in part to higher spending to grow global markets.

Skechers’ general and administrative (G&A) expenses increased by $59.7 million, reflecting additional spending of $24.4 million to support the growth of its international business especially in China and Mexico, and $18.5 million associated with 37 additional company-owned stores, including 14 that opened last quarter.

Still, the tradeoff was worth it, according to Skechers executives, who touted the growth of mind and market share globally—something they believe will continue to gain momentum.

“We believe that international will continue to power our growth especially as we move into leading positions in many markets, open more retail stores and further expand our international footprint,” COO David Weinberg said on Tuesday afternoon’s earnings call with analysts. “In the quarter, we grew in all regions, achieving the strongest increases in Germany, the United Kingdom and Spain, India, the UAE and Turkey as well as China, Russia and Japan.”

For the remainder of 2019, the company expects CapEx to be approximately $85 million to $90 million, including the China DC, enhancements to Skechers’ existing distribution center in Europe, the expansion of the company’s corporate headquarters in California and an additional 15 to 20 company-owned direct-to-consumer stores and eight to 10 store remodels, expansions or relocations, CFO John Vandemore said on the call.

Overall, Skechers’ quarterly sales were $1.354 billion, an increase of 15.1 percent, or 17.2 percent on a constant currency basis. That beat Wall Street’s projections by $10 million.

“Skechers’ direct-to-consumer business continues to grow, acting as a showcase where consumers can experience our brand and shop our complete product collection,” Weinberg said.

Skechers expects Q4 sales to be in the range of $1.225 billion to $1.25 billion, and net earnings per diluted share in the range of 35 cents to 40 cents. Skechers believes all three of its segments will continue to grow in the fourth quarter at rates similar to the third quarter with international again leading the way.

“We believe international remains the primary growth driver for our business,” Weinberg said. “Nearly every international distribution center that we operate had double-digit increases in pairs shipped in the quarter, which we believe will continue into the fourth quarter.”

Analyst reaction to the company’s quarter was mostly positive, with research notes focused primarily on the aforementioned highlights, including the upbeat international growth.

“Heavy investment required to convert international businesses to JVs and subsidiaries is in the rearview, and SKX should continue to develop operating efficiencies and eventually generate operating leverage within the newly converted overseas businesses,” wrote Sam Poser of Susquehanna Financial Group LLLP.

Skechers, which expanded its EBIT margin for the fourth quarter in a row despite higher-than-expected G&A costs, is set up nicely for additional growth during the rest of 2019, wrote John Kernan of Cowen Inc.

“We are forecasting Q419 topline growth of +16 percent, including +8 percent growth at Domestic Wholesale, +20 percent for International Wholesale and +16 percent for Retail to achieve the high-end of management’s Q4 topline guidance of $1.225B-$1.25B,” he wrote.

All in all, the company is bullish on its prospects moving forward thanks to growth across regions and channels.

“The third quarter presented a new quarterly sales record driven by growth in our domestic and international wholesale and direct-to-consumer businesses,” Weinberg said. “We believe this is a significant achievement given the brick-and-mortar retail environment as well as economic and political tensions around the globe. Even with these challenges, we believe the momentum we experienced in the third quarter will continue and our brand will flourish, both domestically and internationally. Along with further developing our infrastructure and logistics capabilities at home and abroad and growing our store base with another 145 to 165 Skechers stores planned around the world before the end of the year, we are designing more resident product and propelling it with marketing to drive sales.”