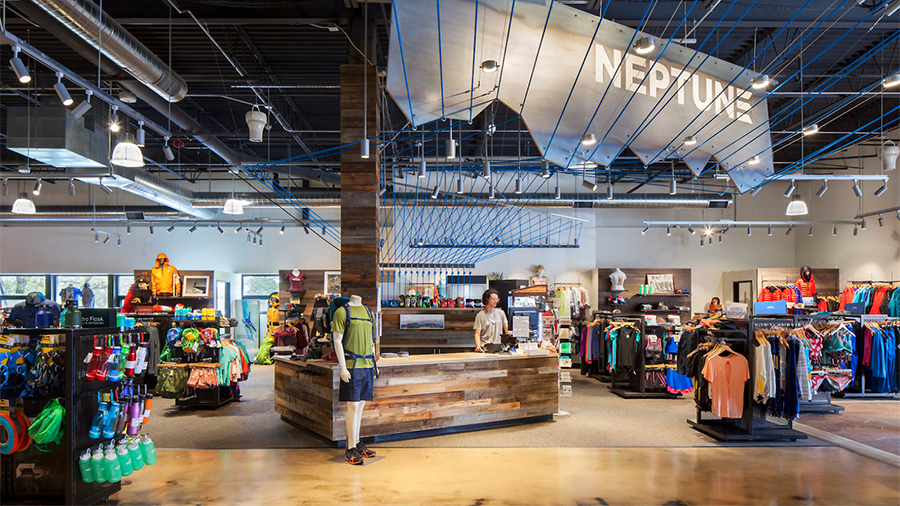 Headed by Bob Wade, family-owned and operated Ute Mountaineer has served the Aspen region since its founding in 1977, enriching the community through events and educational programs.

Founded in 1973 by climber Gary Neptune, Neptune fills the same role in Boulder, especially after its most recent purchase and revamping in 2017 by owners Andrew and Shelley Dunbar, who previously handled drybag maker Sea to Summit’s North American distribution.

SGB Executive caught up with both owner and seller to hear their thoughts about the acquisition.

Why the purchase? When we heard about Neptune possibly being for sale, we felt too much in common to let it pass by without a look. The more we looked at the business, the more excited we got. But we were certainly apprehensive, too, in this ever-changing world. When I was in college at CU, I worked at the Boulder Mountaineer for Bob Culp, who helped me get started here in Aspen.

Do you think it should be a good symbiotic relationship with Ute? We are psyched to work with them and apply what we’ve learned separately over the years. We share so much in common with them and have so much to learn from each other. It’s a similar, wonderful customer base that loves the touch, feel and interaction of brick and mortar.

Any changes in store for Neptune? We will watch and, as I said, learn about Neptune, so no changes in the immediate future. My gosh, we need to hit the ground running and get a sense of the place. If I had to guess, perhaps some more to augment an already solid backpacking, camping offering. More family camping?

What’s your take on the state of specialty retail these days? We’re both optimistic and anxious at the same time. I think Ute and Neptune are in great markets with the right customer base. But we will continue to be challenged by the “perceived” ease and price advantages of online. But at the same time, as retailers, we are up for that challenge. We have so much more to offer.

Will you and Andrew be staying on board? Andrew and I won’t need to stay involved after the sale. We have a great team in place, and we’ve been working closely with Ute during the last month on the transition. They’ve got virtually an identical business model, so they don’t need us.

What’s next for you two? Lots of climbing, travel and generally relaxing without working. Hopefully, we’ll be able to figure out how to do that last part. I think it’s so foreign for any business owner to switch off, ever, so we’ll see how well we adapt.

Does it seem like Neptune will be in good hands, and what does Ute Mountaineering bring to the table? Ute is definitely the picture of what we imagined the next owner of Neptune would be. They’ve got a fierce commitment to their employees, the local outdoor community and non-profits, and they have an outstanding reputation in the vendor community. On top of all that, they’re passionate outdoor people. And, quite simply, they’re a smart retailer. I’ve no doubt they’ll also be able to bring new things from their experience at Ute and Neptune to be even better in the future.

What’s your take on the state of specialty retail today? That’s a big one. I see so much opportunity for specialty retail success stories. I think we’re past the era when all people would talk about was how Amazon or Big Box retailers were killing specialty. There were definitely retailers who suffered or shuttered, but I think others simply adapted, and their customers adapted. After all, who really likes shopping on Amazon, especially for the kind of gear and clothing stores like ours sell.

Then comes the aspect of actually interacting with a live human being, someone who uses the gear and knows all about it. Certainly, businesses like ours need to make financial investments in their physical stores and websites because today’s customers have a higher expectation of the physical and online shopping experiences they want to have. Specialty retailers need to keep evolving and embrace a concept I coined when we first bought Neptune: “fearless retailing.” That is, don’t make all your decisions based on fear of failure, fear of losing money or fear of the unknown. If you go boldly, this is a super fun business to be in, and the customers respond to that. Overall, I’d say I’m very bullish on specialty retail.