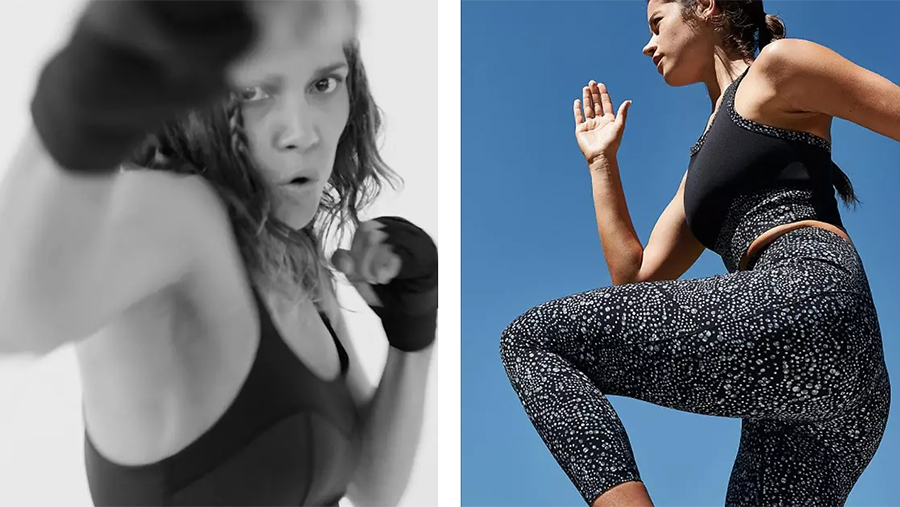 At the Financial Times’ Future of Retail digital seminar, Sweaty Betty’s CEO Julia Straus discussed the many ways she expects Wolverine Worldwide’s acquisition of the U.K-based women’s activewear brand to pay off.

As reported, Wolverine in early August announced its acquisition of the 23-year-old business in an all-cash transaction valued at approximately $410 million. The seller was L Catterton, the private equity firm.

Sweaty Betty, founded in the United Kingdom in 1998, has 65 stores in the UK and Hong Kong and is expected to generate about $250 million in revenue this year. Online sales make up about 70 percent of revenue, with 80 percent sold direct-to-consumer (DTC). The brand also sells through select wholesale partners, including Nordstrom and Bloomingdale’s in the U.S.

At the Future of Retail seminar, Straus expressed confidence that Wolverine had the scale and expertise to take Sweaty Betty to the next level.

“We’re thrilled with where we’ve landed,” said Straus, who took over as CEO in 2019. “What’s exciting about Wolverine is that they bring so much to the table, which aligns with what we were looking for as we look at our next three to five years. They are retailers at heart. They have a tremendous brand portfolio. They understand brand-building, and they have incredible centers of excellence, whether it’s logistics, supply chain etc., that, for a business our size, is attractive.”

Straus’ said her team continually finds different areas where they’ll benefit as they engage with Wolverine’s operations team. From a growth perspective, she expects Wolverine to be a “tremendous help” in supporting its growth in brick and mortar stores and further building its digital business. In particular, Wolverine will help Sweaty Betty’s expansion in the U.S. as a significant portion of Wolverine’s business is domestic.

“They can help us in our U.S. journey,” said Straus. “That was always a very attractive part of this partnership. We’re really focused on the opportunity there. We’re still a very small part of the market, but we have a really engaged and very loyal customer base there. We just need to reach more customers.”

Sweaty Betty expanded into the U.S. in 2013 and still conducts online sales and has a few wholesale accounts. All 12 of its U.S. stores during the pandemic, but opening stores in the region is planned.

In announcing the deal in August, Blake Krueger, Wolverine’s CEO, said Sweaty Betty “took advantage of the pandemic and negotiated out of its leases.” He said the brand has an opportunity to “start with a blank slate” as it restarts expansion and is now established in the U.S. through e-commerce and its strategic wholesale partners such as Nordstrom.

At the Financial Times’ conference, Straus added that, from a category perspective, Wolverine would help Sweaty Betty expand into footwear. At the same time, Sweaty Betty will support Wolverine’s apparel expansion for many of its brands, particularly Saucony and Merrell.

“We’re in apparel, and so there’s a lot that we bring to them,” said Straus. “It’s always great when a partnership feels like there are equal capabilities that you can bring to the table. And so, a lot of their investment thesis was exciting to us. They’re looking at digital. They’re looking at the female customer. They’re looking at soft lines and apparel, and that’s where we aligned. These processes are long. It’s a dating game, but ultimately when we met with their team, it just made business sense. And then, lastly, they’re just great people. They understand our culture, and they understand what we’re trying to build here. It felt very natural.”

Wolverine has said it expects Sweaty Betty to add to its earnings immediately and had raised its full-year revenue forecast to a range of $2.44 billion to $2.5 billion, up from its previous expectations of $2.34 billion to $2.4 billion. Wolverine EPS guidance for this year was lifted by 4 cents to a range of $2.24 to $2.34 to account for the acquisition. For 2022, EPS accretion is expected to be at least 15 cents to as high as 20 cents.

Straus said Sweaty Betty significantly accelerated growth during the pandemic as behaviors changed amid the stay-at-home economy. In June 2020, for instance, Sweaty Betty sold more yoga mats than it did in all of 2019.

However, the growth partly reflects the payback from significant investments over the past two years before 2020 in Sweaty Betty’s digital infrastructure and capabilities as it began pivoting toward a more digital-first model. Aggressive investments were made in digital marketing and social media to capitalize on the “very dramatic” shifts in lifestyles.

“We were very lucky and well placed to be able to step on the gas,” said Straus. “I think what we did was, in retrospect, perhaps a bit risky at the time, but we took a moment to say, ‘Hey, let’s see where the opportunities lie in the face of great uncertainty.”

She said the experience offered an important lesson in listening to customers to “find opportunities to lean into” even in times of uncertainty.

Straus added that the digital-first approach supported a multi-channel strategy that enables a brand to grow “quickly in multiple markets at the same time.”

She added, “The challenge at retail is that you can only grow, unfortunately, one store at a time. It takes a certain amount of time to open and gear up. I still think it’s a great model but in parallel [to digital]. Building digital demand, either ahead of that or in parallel with it, we feel is a nimble and attractive way to acquire customers and introduce your brand in multiple markets at the same time.”

Straus said the forced closure of many stores helped Sweaty Betty optimize its digital-first push. She said, “There’s nothing like when you go pure digital for some time to teach you what it really means to be digital-first.”

She added, “It actually was an experiment that we could never have run under normal circumstances, and I think it’s made the way we think about merchandising and bringing product to the customer much, much faster.”

Stores nonetheless remain “more important than ever,” she contends and gives Sweaty Betty a chance to engage with customers at a high level. She said a goal is to bring more of the engagement accessible at stores to the digital experience. Straus elaborated, “The store is a critical point to engage with your customer, both from a pure sales perspective, in being able to have them touch your product and purchase on the spot. But, equally important is the community and understanding and education. As we reopen stores, I cannot overstate how meaningful it has been to be able to meet customers on the ground there and see their delight with being back in person with us.”