The record results reflect the benefits of the company’s multiyear acquisition strategy and continued improvement in base business operating margin.

On a GAAP basis, operating profit increased 25 percent to $90 million and EPS increased 30 percent to $0.13. (Unless noted, all consolidated measures and comparisons in this news release are adjusted to exclude approximately $43 million of pretax charges in both the first-quarter 2015 and 2014 related to acquisitions and other actions. See GAAP reconciliation section below for additional details.)

“We are off to a great start in 2015, once again delivering a double-digit increase in EPS, while tracking to our full-year growth plans,” Hanes Chairman and Chief Executive Officer Richard A. Noll said. “Our acquisition strategy continues to create value with DBApparel, Maidenform and Gear for Sports all contributing substantially to our double-digit growth. In addition, we are raising our 2015 performance outlook to reflect the recent acquisition of Knights Apparel.”

Since the end of the first quarter, Hanes closed on the acquisition of Knights Apparel, a leading seller of licensed collegiate logo apparel in the mass retail channel. Hanes has increased its full-year 2015 guidance to reflect the expected contributions from Knights Apparel and has updated its expectations for currency exchange rates for the rest of the year.

Key accomplishments for the first quarter of 2015 include:

Innerwear net sales decreased 4 percent in the first quarter, while adjusted operating profit increased 13 percent primarily as a result of strong Maidenform cost synergies. The result was a 310-basis-point improvement in segment operating margin compared with the year-ago quarter. The decline in net sales was due to a retailer’s inventory reduction of approximately two weeks of supply, which has already begun to reverse in early April.

Activewear net sales increased 1 percent in the first quarter, while adjusted operating profit decreased 3 percent. Results were affected by the timing of Champion retail space gains for 2015, many of which will occur in the second quarter.

The DBApparel integration planning has progressed on schedule. Presentations to the appropriate works councils and unions in Europe have begun. The company expects to begin implementing the integration plan, pending negotiations, in the fourth quarter.

Overall, first-quarter results were consistent with the company’s expectations. Hanes has increased its full-year 2015 growth expectations and financial guidance to reflect the expected contributions of the Knights Apparel acquisition and reflect updated assumptions for currency exchange rates for the remainder of the year. The updated assumptions for currency will adversely affect expected net sales but will not have a material effect on operating profit.

The company continues to expect net cash from operating activities to total $550 million and $600 million in 2015. Interest expense and other expense are expected to be approximately $95 million to $100 million combined, up $5 million from previous guidance as a result of additional debt to finance the Knights Apparel acquisition. The 2015 full-year tax rate is expected to be approximately 13 percent, similar to 2014. The tax rate is expected to vary by quarter with the rate being higher in the first half of the year.

The company has made a 2015 pension contribution of $100 million, and capital expenditures are expected to be approximately $80 million to $85 million. The company expects approximately 410 million weighted average fully diluted shares outstanding in 2015.

Charges for Actions and Reconciliation to GAAP Measures

For 2015 guidance, adjusted EPS is defined as diluted EPS excluding actions and the tax effect on actions, and adjusted operating profit is defined as operating profit excluding actions. Hanes’ current estimate for pretax charges in 2015 for acquisition, integration and other actions is approximately $200 million or more, but actual charges could vary significantly. The company believes guidance for adjusted EPS and adjusted operating profit provides investors with an additional means of analyzing the company’s performance absent the effect of acquisition-related expenses and other actions. 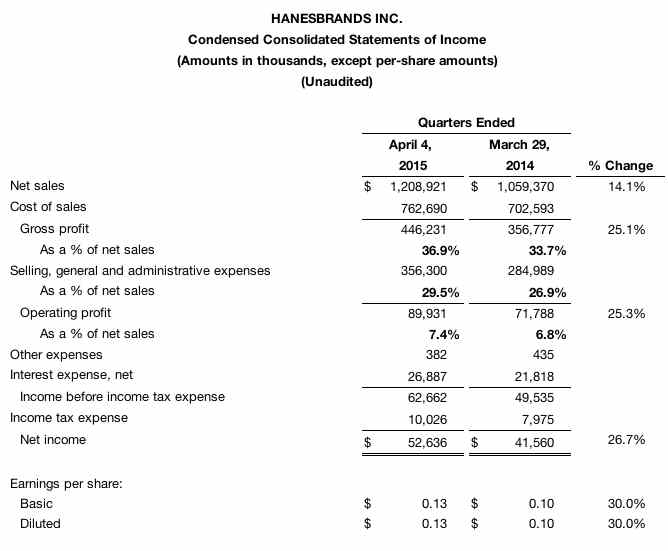