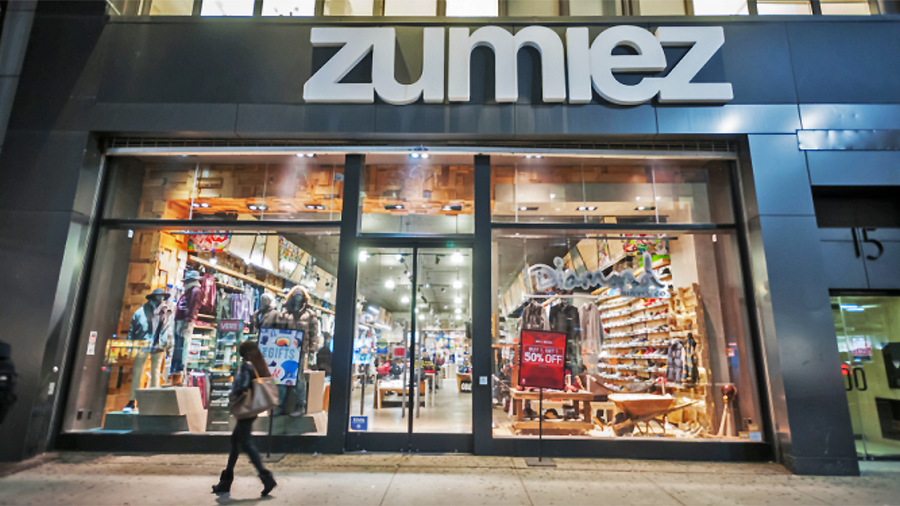 Zumiez reported that first-quarter sales declined sharply due to tough year-ago comparisons but were at the high end of guidance. Earnings, however, fell short of guidance. Rick Brooks, CEO, told analysts, “The operating environment has become increasingly more challenging due to the supply chain bottlenecks, higher logistics costs, a tight labor market, and high inflation levels.”

He added that while these factors were incorporated into the second-quarter outlook, “some of the headwinds were stronger as the quarter unfolded,” which, combined with a shift in the timing of certain expenses, led to earnings missing guidance.”

Brooks said that among positive developments, strong full-price selling was experienced across each of its geographic regions. Despite the tough comparisons in the U.S. from the stimulus spending a year ago, product margins were up domestically. Strong results were also seen across international entities in Canada, Europe and Australia. Said Brooks, “We believe this reflects the strength of our merchandise offering and deep customer connections.”

Brooks added that beyond the skewed results over the last two years due to the pandemic, Zumiez’s compound annual growth rate (CAGR) over the ten years between 2011 to 2021 was 8 percent, with EPS expanding over that time at a 15 percent rate. Brooks said, “This represents substantial progress toward our long-term strategy and meaningful shareholder value.”

The year-over-year decline was attributed to the significant benefits from the U.S. stimulus realized in early 2021 and, to a lesser extent, the continued inflationary pressure on the consumer and increased competition for the discretionary dollar.

Gross margins eroded 420 basis points to 32.8 percent from 37 percent in the 2021 first quarter but ahead from 31.2 percent in the first quarter of 2019. While overall product margins benefited from greater full-price selling, the sales mix shift away from its higher-margin U.S. overshadowed the improvement. The 420-basis-point decrease in gross margin was primarily driven by lower sales in the quarter, coupled with elevated expenses due to higher logistics and labor costs.

SG&A expense increased 790 basis points to 32.6 percent of sales from 24.7 percent a year ago and up from 30.7 percent in the pre-pandemic first quarter of 2019. The year-over-year increase primarily reflects the sales deleverage. A wage rate increase and the movement of its annual 100,000 events into the first quarter of 2022 from the fourth quarter of 2021 also weighed on costs.

Zumiez ended the quarter with inventories up 3.9 percent overall and 4.1 percent on a constant-currency basis. Inventories were also up about 4 percent against the 2019 first quarter. Chris Work, CFO, said, “Overall, the inventory on hand is healthy and selling at a favorable margin.”

From a category perspective, in May 2022, all categories were down in total sales from the prior year. Men’s was the most negative category, followed by hard goods, accessories, women’s and footwear.

For the second quarter, Zumiez expects sales to be between $232 million and $239 million, down from $268.7 million a year ago, with continued pressure on sales during the quarter as the retailer anniversaries the impact of domestic stimulus from 2021. The guidance also reflects the inflationary pressure on the consumer in the current environment and the continued competition for the discretionary dollar.

Consolidated operating profit as a percent of sales for the second quarter is expected to be between 5 percent and 6.5 percent, and EPS is expected between 45 cents to 55 cents against 94 cents a year ago.
Looking to 2022, Work said Zumiez is now “more cautious in how we’re looking at the full year and the potential impacts to the current operating environment, including the lingering impacts of the prior-year stimulus, inflationary pressures, the continued pressure on consumer discretionary spending and global unrest. Given these pressures, we intend to remain flexible and agile in adjusting inventory, expense, and capital allocation plans based on any changes in these events.”

Zumiez now anticipates the total sales to be down in the high single digits in 2022 as compared to 2021. Beyond the second quarter, Zumiez expects further pressures in the back half of the year given the “outsized inflation concerns in the market.” In fiscal 2021, Zumiez achieved peak product margins, representing its sixth year in a row of product margin expansion.

Previously, Zumiez’s outlook called for sales in 2022 to be down in the low-single-digit levels and EPS to increase in the mid-single digits. Consolidated product margin was expected to be roughly flat.

Brooks said, “We are cognizant that the current macroeconomic environment is likely to deteriorate further and near-term year-over-year comparisons remain challenging. However, we have a strong balance sheet and remain confident in our consumer-centric growth strategy and flexible operating model that has proven resilient to a variety of challenges over time.”