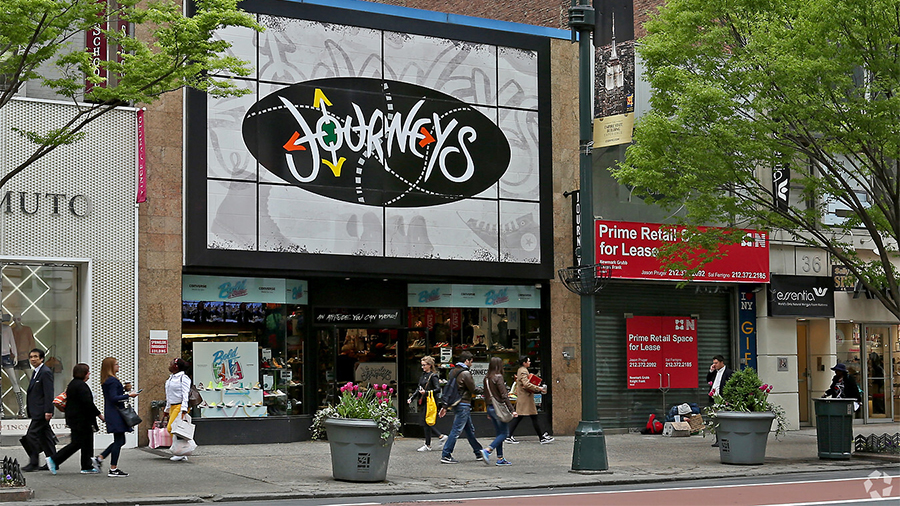 Genesco, Inc.’s sales and margins topped expectations in the third quarter, but its full-year outlook was lowered as heightened promotional activity is now planned for the fourth quarter, particularly at the flagship Journeys chain.

Regarding the fourth quarter, Mimi Vaughn, Genesco’s president and CEO, said Genesco experienced a “very noticeable slowdown in traffic and sales in the last few weeks of October that carried into the first few weeks of November. Not only were we up against last year’s early holiday shopping, but warmer weather hampered the start of fall and winter merchandise sales.”

Sales have improved since and Genesco was pleased with the results over Black Friday weekend.

“However,” added Vaughn, “as we consider the remainder of the quarter, we recognize the consumer pressured by inflation is having to make harder choices on where they spend their money. And while we believe our inventories are at appropriate levels, given the heightened promotional environment, we have increased our planned promotional activity at Journeys and elsewhere over the holidays in order to be competitive as consumers search for bargains.”

She added that while Genesco believes trend-right assortments, compelling marketing campaigns, and promotions would help drive holiday sales, “the choppiness in traffic and sales, the additional promotions, and continued pressure we’ve been experiencing will weigh on results. Taking all this into account, we’re adjusting our fourth-quarter expectations.”

Beyond the return to a more normalized mark-down and promotional cadence and sales slowdown, other factors weighing on fourth-quarter results include wage and operating costs inflation and the anniversarying of some one-time major expense benefits.

Genesco now expects sales for the year to be down 1 percent to 2 percent year over year, versus prior guidance of down 3 percent to flat. Adjusted EPS is now expected in the range of $5.50 to $5.90 with an expectation that adjusted EPS for the year will be near the mid-point of the range versus the prior expectation of near the mid-point of $6.25 to $7.00. Adjusted earnings were $7.62 last year.

Sales grew 4 percent on a constant-currency basis. Comps were up 3 percent against a 21 percent gain a year ago with every business posting positive gains. The comp trend improved sequentially versus a negative 2 percent performance in the second quarter.

Overall comparable store sales at its stores were up 2 percent against a 25 percent gain in the prior year. Comparable direct or online sales were up 6 percent against a 7 percent gain last year. Vaughn called out digital as a highlight in the quarter, noting that digital sales are “up almost 75 percent compared to pre-pandemic levels, maintaining essentially all pandemic growth, representing 18 percent of retail sales, and sustaining strong double-digit profitability.”

Another highlight was better-than-expected gross margins despite lapping last year’s unusually strong gains. Vaughn said, “We did not partake in aggressive discounting despite an increasingly promotional environment in the U.S.”

Gross margins in the quarter were 48.7 percent, down 50 basis points compared with 49.2 percent for both last year and fiscal 2020. The decrease is due primarily to a more normalized promotional environment for all divisions, except Johnston & Murphy.

Vaughn said Genesco’s better-than-expected performance reflects the benefits from its shift to being “footwear-focused” following its sale of the Lids chain and the increased emphasis being placed on increasing digital penetration, strengthening consumer connections and realigning its cost structure.

“The third quarter played out largely as we had anticipated, with many consumers coming out to shop when there was a reason to buy and retreating to conserve cash during the in-between periods,” said Vaughn. “This was a real change from the strong selling environment a year ago when the back-to-school selling season extended into late September and October, driven by higher consumer savings levels and pent-up demand. And students bought anything that was in stock and available.”

Journeys’ Comps Inch Up 1 Percent
Journey Group’s comps grew 1 percent in the third quarter against a 15 percent jump in the year-ago quarter. Sales improved 0.2 percent to $380.6 million. Operating income in the segment fell 37.6 percent to $27.1 million.

Vaughn said back-to-school sales got off to a slow start in July at Journeys, as well as its U.K.-based Schuch chain, but sales sharply accelerated in August and early September as consumers reverted to more typical back to school buying behavior.

Both fashion athletic and casual footwear sales grew with casual offerings continuing to see faster growth than fashion athletic. She added, “We did, however, see the ongoing evidence of the Journeys consumer being squeezed by inflation and pressure on their wallets, making fewer trips to shop, trading down to more excessively priced product and pulling back on non-footwear add-on purchases. The breadth of its assortment, careful planning for this potential shift, and strong vendor partnerships allow Journeys to meet the needs of this more budget-conscious consumer.”

Conversion and higher transaction size both improved during the quarter. Following a back-to-school period marked largely by full-price selling, sales slowed later in the quarter as the chain lapped more-challenging year-ago results. In October 2021, sales were boosted by concerns over limited inventory availability and earlier holiday messaging.

One highlight of the third quarter was Journeys’ double-digit digital growth, fueled by effective use of paid search, paid social and a fleet of influencers that continue to drive brand awareness. Vaughn also said research conducted during back-to-school and in November reaffirmed that the majority of Journey’s teen customers increasingly believed shoes are the most important part of an outfit, with Journeys maintaining a position as one of the top considered retailers for shoes.

Vaughn said Schuh built on a strong first half with a “solid” third quarter against strong year-ago gains. She said, “Like Journeys, Schuh’s strength is identifying the right fashion trends and securing the right product and brands for its youth consumer. The fashion trends driving Schuh’s business largely overlap with one’s driving Journey’s.”

She said Schuh is benefiting from better access to higher-tiered product from several key brands, effective marketing strategies like the introduction of its loyalty program, and high levels of customer engagement, such as its student events, and Schuh’s Purpose Pillars, “which are resonating with its youth consumer – all of which are helping Schuh perform well on a year over year basis,  despite the economic turbulence, exchange rate pressure and lapping significant one-time gains.”

Vaughn said J&M continues to benefit from its repositioning with casual and casual athletic now making up most of J&M’s footwear assortment. Dress footwear, for which the brand has been best known, now makes up less than 10 percent of overall sales. Said Vaughn, “This strategic shift has allowed us to position the brand to now reach a broader and younger consumer base all while maintaining and building upon our premium footwear positioning and price points. We’re excited about the new direction we have set. We were able to double the size of the brand and its last reset and believe we now have the opportunity to do that again.”

Plans For 2023
Vaughn pointed to a number of actions Genesco is taking to strengthen its business amid the uncertainty in the marketplace. They include better utilizing first-party data to support personalized marketing and leveraging the new customer acquisitions over the pandemic. Genesco also plans to launch loyalty and affinity programs at Journeys next year following successful introductions at J&M and Schuh. Also in the works for 2023 are the launch of new omnichannel services in North America; expanding its store fleet for the first time in years, including exploring off-mall locations for Journeys; and enhanced marketing investments to capitalize on the recent success at J&M.

Vaughn added that while promotions are increasing for the fourth quarter, they’re expected to normalize next year as inventories rebalance across the industry. Along with substantial declines in marine freight and a reduced reliance on air freight to overcome supply chain delays, the reduced promotional activity is expected to reduce margin pressures.

Vaughn added that Genesco plans to “aggressively double down on our ongoing efforts to battle the wage and other costs inflation we’re experiencing” to offset the impact on earnings.

Vaughn concluded, “In summary, our businesses are in strong and differentiated strategic positions in the consumer marketplace. We compete in growing and fragmented markets providing a runway for growth and opportunities to take market share. Within our existing consumer segments, we can increase awareness, convert shoppers to buyers, build loyalty and drive repeat purchases. Our business has proven to be resilient during past recessions. And the actions we successfully took during the pandemic, provide a road-tested playbook. Despite the current environment, our consumer ultimately wants new and fresh products and the core fashion brands we carry.”