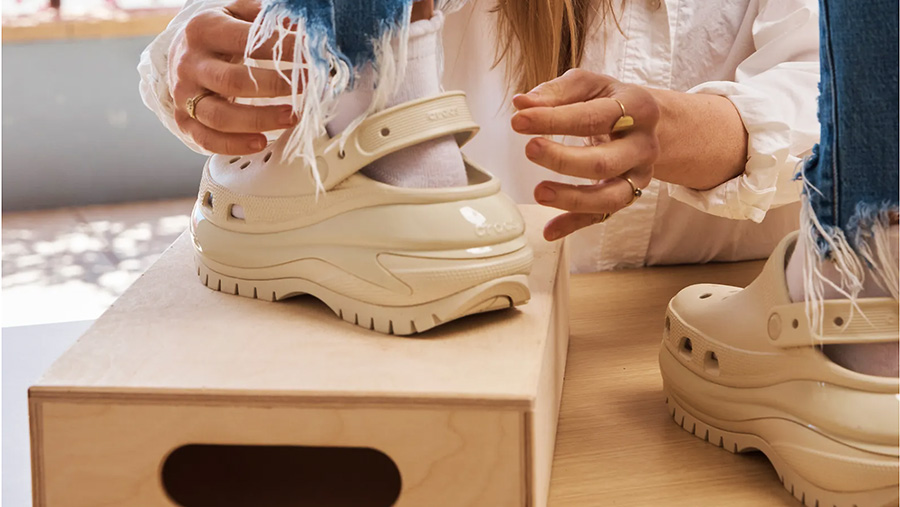 Shares of Crocs, Inc. lost 11 percent of their value on Thursday after the cushy-shoe maker slightly lowered its sales and earnings guidance for the year. The company now expects sales for the Crocs brand to grow approximately 14 percent to 17 percent in 2022 or 10 percent to 13 percent on a currency-neutral basis.

Previously, revenue growth for the Crocs brand was projected to exceed 20 percent compared to 2021.

“With uncertainty around the future macroeconomic environment and consumer behavior, we are planning for lower growth in the Crocs Brand in the short-term,” said Andrew Rees, Crocs’ CEO, on the company’s second-quarter analyst call. “Our assumption is a consumer confidence in the U.S. and key European markets will continue to soften as the year progresses, as higher interest rates and high food and energy inflation slow consumption.”

Despite a strong quarter for Crocs, the updated guidance came as sales and earnings were above guidance.

SG&A expense of $249.8 million increased from $199.9 million in the same period last year, and SG&A, as a percent of revenues, improved to 25.9 percent from 31.2 percent in the prior year. Adjusted SG&A improved to 25.1 percent of revenues versus 31.2 percent for the same period last year. Adjusted SG&A excludes $7.5 million of costs, primarily related to the Hey Dude integration.

By brand, Crocs brand revenues of $732.2 million in the quarter increased 14.3 percent, or 19.4 percent on a constant-currency basis, as compared to 2021. The growth was impacted negatively by Russia and China lockdowns due to COVID, which offset approximately three percentage points of growth.

Rees said both the Crocs and Hey Dude brands outperformed what it estimated to be flat to down U.S. footwear market. He said, “Both Crocs, Inc. and the Crocs Brand are gaining significant market share.”

Rees said the integration of Hey Dude is “going well,” including making key hires and recently launching of a brand campaign that includes updated branding.

“Hey Dude is one of the hottest brands in the U.S. footwear market today because of the consumer love of the brand and its products,” said Rees. “We are investing rapidly in the capabilities that will allow us to sustain the brand’s growth potential. While we are not yet ready to outline the longer-term potential, we believe it is significant, and we will easily achieve a short-term goal of a billion dollars in sales.”

“We have developed deep connections with our consumers, and they love our brand as evidenced by our brand metrics, which continue to be very strong as well as leading industry sales,” said Rees. “When we combine brand awareness and relevance with our democratic price point, the brand is well-positioned to thrive when the consumer is looking for comfort and value,” Rees continued.

Internationally, Crocs sees strong growth in South Korea, India and Southeast Asia, and the company is “very encouraged by the green shoots we are seeing in China.”

Successful collaborations and licenses, ranging from the second drop of Salehe Bembury to Cinnamon Toast Crunch Cereal to MCM in China and Lazy Oaf in Europe, continue to elevate the buzz around the brand.

From a product perspective, Crocs expanded its sandal portfolio with the Crush Sandal, which debuted in the U.S. and top Asian markets. “Innovations such as the Crush Sandal and dedicated marketing campaigns, such as Summer of Crocs that featured five new sandal introductions, are just two examples of how we are driving growth in the $30 billion sandal market,” said Rees.

Sandals, however, were a disappointment, down 13 percent year-to-date on a currency-neutral basis. Rees said Crocs “over-edited the line to maximize throughput at the factories,” which caused delays in bringing newness to market. The U.S. also had a “poor” sandal season. Rees added, “Year-to-date, we do see strong double-digit growth in our Icon Sandal franchise, and we expect sandals to improve in the back half with more newness and additional marketing.”

For the third quarter, Crocs expects: