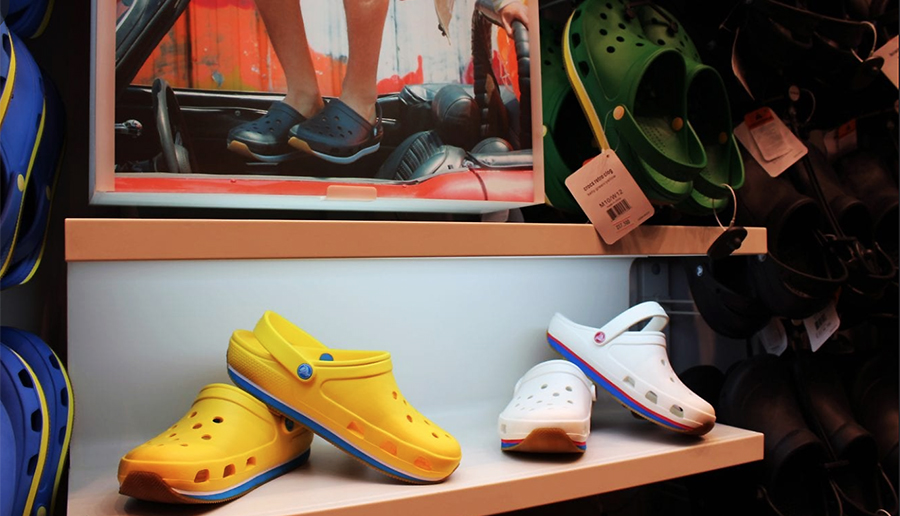 Powered by resiliency in the U.S. region and skyrocketing e-commerce gains, Crocs Inc. became one of the rare industry players to deliver strong earnings gains in the pandemic-sidetracked second quarter. Sales declined only slightly.

Revenues declined 7.6 percent to $331.5 million, also far eclipsing Wall Street’s consensus target of $250 million. On a currency-neutral basis, sales were down 6.0 percent on a constant-currency basis.

“Our extraordinary performance in the midst of the most difficult business environment many of us have faced in our lifetime demonstrates our ability to deliver increased profitability and underscores the work we’ve done expanding the desirability, relevance and consideration of our brand and product offering globally,” Andrew Rees, president and CEO, on a conference call with analysts.

While many brick & mortar stores were closed, Crocs.com and other digital commerce platforms remained open, and Crocs saw record quarterly sales in e-commerce as well as strong sell-through in e-tail and wholesale partner e-commerce sites, as consumers migrated to online shopping. These strong growth rates have recently started to temper as brick & mortar has started to reopen.

Overall, Crocs’ digital business, which combines e-commerce and e-tail, represented 56 percent of Q2 sales compared to 33 percent for the comparable period last year. Rees said, “While these strong growth rates have recently started to temper, it is clear that the pandemic has accelerated the shift to digital and the digital has been, and will remain, a high priority channel going forward.”

Wholesale revenue declined 19.5 percent to $145.0 million, and retail revenue declined 41.8 percent to $60.2 million due to COVID-19-related store closures. Most of its 360 company-operated stores were closed for some period during the second quarter as well as partner stores and wholesale customer doors. As of June 30, 98 percent of its company-operated stores were open. Retail comparable store sales on a constant-currency basis grew 10.5 percent upon re-opening.

High-Single-Digit Growth Seen In U.S.
In the Americas region, sales gained 0.7 percent to $171.6 million as the U.S. business delivered high-single-digit revenue growth despite stores being closed for half of the quarter. Gains of 102.2 percent in e-commerce offset declines of 3.6 percent at wholesale and 48.1 percent at retail.

Company-operated stores in the Americas closed in mid-March and began reopening in mid-May. Many wholesale customer’s brick-and-mortar stores were also closed during these times. Despite the closures, the Americas region grew 1 percent on a constant-currency basis, benefiting from triple-digit e-commerce growth. Said Rees, “We’re particularly pleased by our continued momentum in the United States which delivered high single-digit revenue growth.”

When stores reopened, traffic declined but the conversion and average transaction value increased. As a result, Crocs saw 18 percent comps with softness in tourist markets, such as Hawaii and Orlando, but strength in markets relying on local consumers.

In the Asia Pacific region, sales declined 18.7 percent on a currency-neutral basis (21.0 percent reported) to $93.6 million. Online gains of 31.7 percent only partially offset declines of 44.8 percent at wholesale and 18.8 percent at retail. Growth in China and Korea was offset by declines in Japan, India and much of Southeast Asia. Outside of China and Korea, most of its company-operated stores were closed for the majority of the quarter.

EMEA’s revenues were down 1.8 percent on a currency-neutral basis (5.1 percent reported) to $66.4 million. E-commerce sales grew 52.4 while sales declined 8.6 percent at wholesale and 60.8 percent in retail.

“EMEA performed better than expected in light of retail players. All of our direct markets experienced revenue growth with strong digital performance offset by weakness in our distributor markets,” said Rees. The brand’s company-operated stores in Western Europe closed in mid-April and reopened in mid-May, while stores in Russia closed in early April and reopened in early June.

Rees said Crocs continued to fuel brand heat with collaboration, including one with Chinese actress Yang Mi on TMall, as well as collaborations with Australian model and actress Ruby Rose and country singer Luke Combs. Rees also believes the brand benefited from its “A Free Pair for Healthcare,” program, which helped to generate more than 29 million new visits to crocs.com. Said Rees, “More importantly, in just 45 days we donated more than 860,000 pairs of Crocs with a retail value of nearly $40 million to frontline health care workers in need.”

SG&A expenses were reduced by 12.3 percent to $123.3 million as expenses were reduced during the pandemic. Excluding non-GAAP adjustments that were largely tied to $8.2 million of frontline healthcare product donations, adjusted SG&A was 33.0 percent of revenues versus 39.4 percent in last year’s second quarter.

At June 30, Crocs had $275.0 million of borrowings outstanding on its credit facility after reducing borrowings by $75.0 million during the second quarter. Crocs have ample liquidity, including $151.4 million in cash and cash equivalents and up to $224.4 million of available borrowings under its facility.

Inventory Constraints To Limit Second-Half Growth
Rees cautioned that global uncertainties remain with both the pandemic and the consumer as stimulus programs potentially expire and unemployment persists. Specifically related to Crocs, inventories going forward are constrained as the company in March dramatically cut orders on summer deliveries and sold-through Q2 stock more than anticipated.  The CEO added, “And while we are reacting to shortages in core inventory, we feel it is more important to keep inventory lean and to turn up the majority of our focus to 2021.”

As a result, revenue for the remainder of 2020 is expected to be approximately flat compared to the back-half of 2019.

“We’re incredibly optimistic about 2021, and we will continue to execute our growth plan that’s clearly working,” said Rees. “Our four key product pillars, clogs, sandals, Jibbitz, and comfort technology and our powerful social and digital marketing are clearly creating consumer engagement. From a channel and regional perspective, our digital-first strategy and our growth focus in Asia will lead our future growth. We believe we have a clear path to return to revenue growth in 2021.”