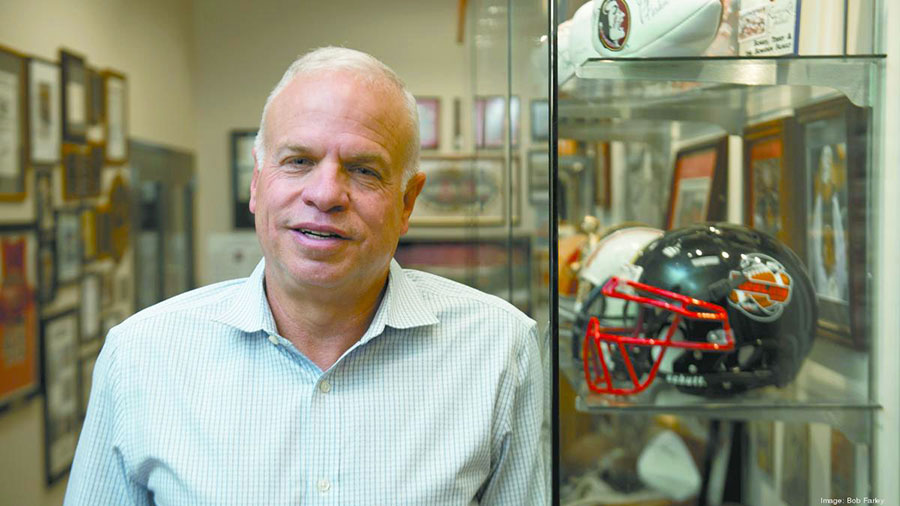 After 21 years with Hibbett Sports Inc. and nine years as CEO, Jeff Rosenthal will retire from his post as the company’s top executive once a replacement has been named and comes on board.

Rosenthal recently spoke with SGB Executive about his decision to leave Hibbett and the legacy he’s leaving at the Birmingham, AL-based retailer. He said it was “tough,” but he also felt it was the right time to pass the company’s reins to a successor and find something else to do—what that is exactly, he’s not sure.

He said he expects a new CEO to be named in the early fall, and in addition to continuing to serve on the company’s board of directors, Rosenthal will stick around Hibbett’s executive offices once his replacement is on the job to “make sure that there’s a smooth transition and everything goes as planned,” he said, adding, “I’m always going to be available.”

Rosenthal, who previously served as Hibbett’s vice president of merchandising and marketing as well as president and COO before ascending to CEO, is leaving the company in a strong position.

While Rosenthal said he wished he had undertaken some of these initiatives sooner, he’s happy with the company’s current spot in the sporting goods retail landscape, and he knows that the board will find someone who can shepherd Hibbett during whatever trends—digital or otherwise—come next.

“The last three to five years have been especially tough, but Hibbett did a lot of work establishing a different strategic position in the marketplace, especially with digital,” Rosenthal said. “But I feel like we’ve gotten a lot accomplished, and we’re sitting on a solid foundation moving forward.

Here is the rest of what Rosenthal shared with SGB about his time as Hibbett’s CEO, including what he’s most proud of and which prized shoe this self-described “sneaker dude” recently added to his collection.

Two weeks after your retirement announcement, Scott [Bowman] resigned, and yet Hibbett seems to have not missed a beat. What does the company’s ability to perform so well after the announcement of two C-level departures say about Hibbett? Probably the biggest thing is we have built a great team, and we have lots of team members and lots of employees here that are all part of it to make sure that we’re successful. A lot of the people that I’ve brought in through the years have just fit in very well with our culture. We all understand not only where the company’s going but also our strategic positioning in the marketplace.

As you reflect on your time at Hibbett, what are you most proud of? I’ve been here close to 20-plus years and I’m proud of many accomplishments. Some of the biggest, as I became the CEO, include building a new DC [distribution center] with no disruption, moving offices with no disruption, building a more than $100 million dollar digital business and the acquisition of City Gear. Those are some of the highlights. There’s many more, but those stand out in addition to building a world-class team.

Do you see the City Gear acquisition as transformational for Hibbett? Absolutely. I think strategically it fits in very well. We had a number of stores whose consumer insights are the same as City Gear, but it also gives us an avenue to grow in certain neighborhoods with certain consumer insights, and it gives us a lot of opportunities to grow brick-and-mortar because a lot of their transactions are more cash-based and not necessarily digital. There’s an opportunity for City Gear with digital, but really most of their customers are cash-based.

As you think back on your time at Hibbett, is there anything you wish you had done differently or were there some opportunities that the company passed on that you wouldn’t pass up again? Probably the biggest thing—and this wasn’t necessarily just me, there were a lot of reasons—was the need to move faster. The customer today is moving and changing rapidly, and this whole industry is changing and moving rapidly. Speed is going to be the answer for the future. The question now for is how can you keep innovating for future growth?

Hibbett has really made up some ground with digital. Even though you were a little late to the game—by your own admission—do you feel that Hibbett has caught up with your competitors? Yes, but I would say that we’re never truly caught up. From a digital front, we have gone from not having anything to being one of the industry leaders, if not the leader. Now we’re finally getting a chance to play offense when before we were playing a lot of defense. Everybody wants to score—you’ve got to score points to win—and now we’re at least able to be in the ballgame.

When you think about the retail landscape in the 20 years since you’ve been there, do you think Hibbett has kept pace with the changes? I would say that we have done an OK job with that, but we have to get faster. It’s not that we’ve done a bad job, but there’s going to be continuous innovation, especially with omnichannel—the way customers shop, the way they want to get their products, how to tell stories. Customers are more and more demanding, so how do you get product to them quicker, how do you get them the right product. I think it’s still the beginning stage not only for Hibbett but for all retail with Amazons and Target offering same-day shipping and bringing lots of innovation. I don’t know that changes to the retail landscape ever end. If anything, it’s probably going to get faster.

But there is still a place for brick-and-mortar with both Hibbett and City Gear? Absolutely. The only thing that’s changed somewhat is how you get the exact product that people want in the exact store, but as we did with BOPIS and ROPIS, we see that a lot of customers don’t have the time they once did. They want to make sure if they’re going to go into a store that you have what they’re looking for. With product launches, for example, they want to use our app to make sure we have that product when they come into our store. All the different ways we communicate with our customers are becoming more and more important.

On the earnings call a few months ago, you called yourself a longtime “sneaker dude.” Where did the passion for sneakers come from? I got into business right out of college and I love sports, so I always think of sneakers with sports or fashion. I’ve just always wanted to have the latest and the greatest and the coolest. It’s just a passion I’ve always had.

Any favorites in your collection that establish your cred as a true sneakerhead? For Father’s Day, my kids got me a pair of Travis Scott Air Jordan 1’s.

What’s next for you personally? Since I’m working day to day, I’m going to take a little bit of time to reflect, and then possibly get involved in a board or a nonprofit—and maybe helping another company. I still haven’t decided.

Trango Cam Will Make it to Market…