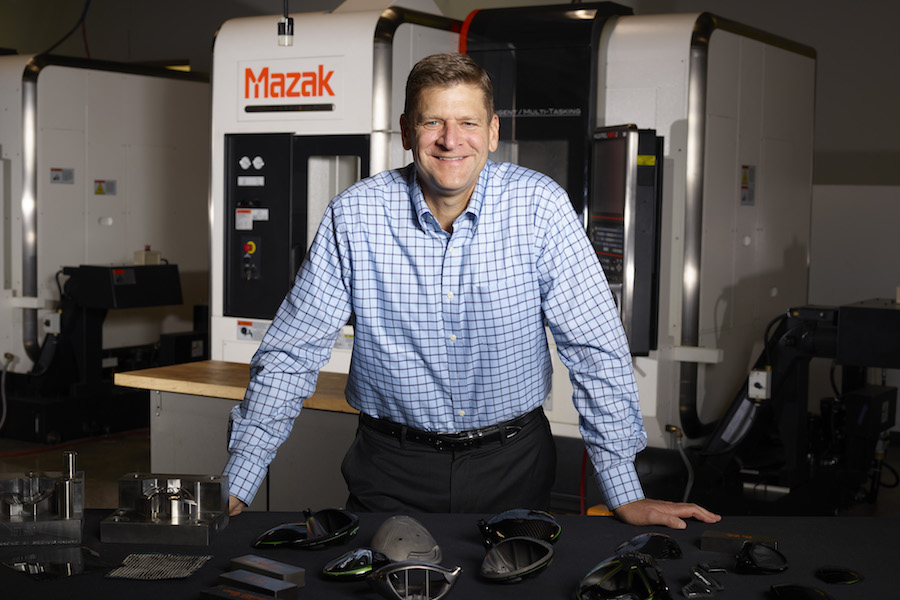 As Callaway Golf Co. President and CEO Chip Brewer discusses the company’s recent acquisition of Jack Wolfskin and the unfolding plans to grow its newest asset, he has all the confidence of a tour pro lining up what the novice might consider a challenging shot.

It’s a tricky lie for most, but Brewer has been through this before. He’s seen the hazards that lurk and faced the pressures of a watchful crowd, so he knows exactly the right approach as Callaway lines up its Jack Wolfskin strategy and prepares for the rollout.

Though it’s still early, Brewer and Callaway have faith they will ace the $476 million acquisition of the German-based outdoor apparel brand—a deal that raised some eyebrows in the sporting good and outdoor worlds when announced last November.

While Brewer understands the doubts, he is undeterred in believing his company is ideally equipped to overcome them because Callaway has been there before with previous acquisitions.

“I think it’s totally reasonable for folks to have a healthy skepticism on that front, but we’re pretty good operators,” he told SGB Media in a recent one-on-one conversation. “We might have to prove ourselves in the outdoor world, but it’s not like we’re a startup. It’s not like we’re starting from scratch without any track record.

“We are cognizant of the fact that we don’t know everything about outdoor apparel, but believe me, I’m not going to put a bunch of golf guys into the outdoor apparel space. We’re going to approach it a lot more rationally and authentically than that.”

That approach involves ensuring Jack Wolfskin retains the same identity it has built in Germany over the past 40 years while also expanding its market and growing share in key channels.

Although the brand’s North America operation will be based in Huntington Beach, CA, allowing the company to leverage some back-office operations, the heart and soul of the apparel company will remain in Europe, including the global management team led by CEO Melody Harris-Jensbach. These are some of the reasons Callaway pursued the deal in the first place.

“Jack Wolfskin is a leader in the category,” Brewer said. “They are the No. 1 positioned outdoor apparel brand in a considerable market [Central Europe], and they’re a top-three player in China, which is on everybody’s radar screen right now.”

That said, Jack Wolfskin has not yet been able to penetrate the U.S. market, so Callaway is ready to provide the resources and the blueprint needed for Jack Wolfskin to flourish on this side of the Atlantic.

“Competitors are not going to give up market share willingly, so it’ll be a fun battle and fun opportunity,” Brewer said. “We’re looking forward to the opportunity to prove ourselves in the space.”

Here is the rest of what Brewer shared with SGB Media, including much more on the Jack Wolfskin deal, as well as what Callaway’s outlook for the golf market in 2019:

What did Callaway see in the active lifestyle and outdoor space, generally, that drew the company into making a play there? As our soft goods business [Ogio and TravisMathew] started to really grow, we began looking at the potential to further that. We looked at areas that were complementary to those brands and our current brands, areas where we thought we could add value. We like categories where it’s a passion play, and we understand that because we’re well-versed in that same approach in the golf space. The outdoor apparel business has attractive growth rates, a large market and is a category that fits well with our other soft goods businesses. We really identified it as an attractive opportunity and had been exploring various paths there for a year prior to the Jack Wolfskin deal coming together.

Let’s shift to Jack Wolfskin, particularly. What was attractive about the brand that sparked Callaway to eventually pursue it as an asset? Candidly, I had never heard of Jack Wolfskin. But as we looked at other potential opportunities—and we got pretty far into a bunch of them—we started to learn the global markets. We discovered that Jack Wolfskin has a very strong position in Europe, particularly Central Europe. Nate Pund [of Houlihan Lokey], who had done some work with us previously, introduced us to the brand, but we had researched the category and gotten to be knowledgeable about it prior to that. Obviously, we liked the space and thought there were some strong synergies with our soft goods business that we could leverage. Jack Wolfskin is not well known in the U.S., but it’s strong in Europe and in China. And our business is very strong in North America, but we don’t have a soft goods position in China or in Central Europe, so we thought that was complimentary. We thought we would be able to add value to them in the markets where we’re strong, they would be able to add value to us in the markets where they are strong, and that the sum of the parts would be greater than the individual.

Can you speak to Jack Wolfskin’s management team and how much that factored into your decision to acquire it? Wall Street doesn’t know much about Jack Wolfskin because it’s not U.S.-based and also had been through a few owners recently. But the management team is one of the big assets. Melody Harris-Jensbach, who has been there since late 2014, is a wonderful CEO and wonderful person with an incredible background in the apparel and design space. We totally agreed with the strategy she was enacting but she was being held back, of course, by the capital structure of that business. That’s one area we can provide value. We wouldn’t have gone after this if we didn’t believe in the management team and their strategy.

I interviewed Nate Adelman, head of marketing at Ogio, last year, and he spoke of the importance of sharing ideas across the brands in Callaway’s portfolio. Do you expect that similar kind of crossover with Jack Wolfskin? Absolutely. Nate and the marketing teams within the U.S. are going to be able to help Jack Wolfskin as it looks at building strategies to penetrate the U.S. market. They’re essentially starting from zero. They have a little bit of presence here, but they’ll be building marketing campaigns, positioning, etc., to be successful here. They’ll be leveraging the infrastructure that we have, whether that be distribution centers or information technology. Those are significant advantages. I had lunch with one of our supply chain guys the other day and discovered an unintended synergy. He was recently meeting with a supplier of camping tents—a supplier for Jack Wolfskin—and brought a golf bag idea to them. The supplier was able to take 25 percent of the weight out of that golf bag using technologies and approaches they use in the outdoor space. That’s not why we did the acquisition, but it’s a good example of shared ideas and some of the benefits that might come out of this.

Is there any more clarity around how Callaway plans to ramp up Jack Wolfskin’s presence in the U.S. and what the potential for the brand looks like here? There is, but I can’t go through a lot of it. I can tell you we’re in the process of recruiting for a general manager of Jack Wolfskin North America. We’re going to be making investments in personnel and structure, and then as we get those in place, we’ll focus on brand development. We hope to establish a growing and well-defined position in the marketplace. We do have ambitions of growing the business here and in some other key markets across the globe, and we’re starting that process right now, but first is setting up the structure that we need there and a lot of that is human capital. We’ll be making those investments first and foremost.

Since I’m chatting with the CEO of Callaway Golf, I would be remiss if I didn’t talk about golf. What’s the general forecast the company has for the industry in 2019; are things looking good? We’re cautiously optimistic. The industry is in a healthy position. And we’ve got an incredible product line with some great innovations that we brought out. The Epic Flash Drive and this new use of artificial intelligence to increase ball speed are wildly exciting for us. Our core golf business is in a very nice position right now and we’re optimistic for a good year in front of us.

How does a company like Callaway help promote participation in golf, and do all stakeholders need to work tirelessly to ensure the sport grows at a healthy pace? Definitely. We have a role there, as everybody else does. Participation has been stable. The industry grew last year. Each market has its own nuance, but the U.S. market was up in the low single digits—4 to 4.5 percent. We were fortunate enough to grow considerably faster than that, and that’s what we hold ourselves responsible for. The nature of the industry is in a good spot right now, and there are a lot of initiatives going on, but also the growth of nontraditional golf such as TopGolf and other avenues that we think will be very healthy for golf over the long course. We’re an active investor on the TopGolf board, and as that continues to scale up, I think it has a very potential positive impact for the game and participation. I think golf is in a good space right now, and we definitely have a role in trying to sustain that.