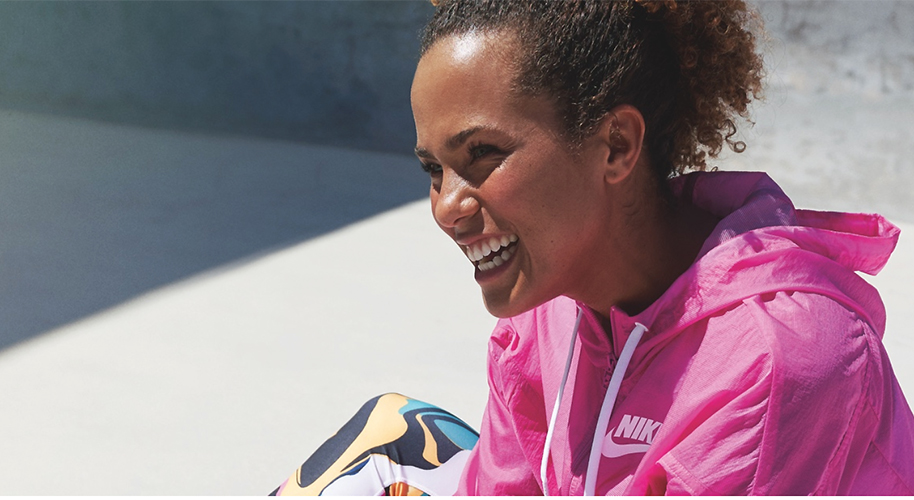 Caleres Inc., the parent company to family footwear retailer Famous Footwear and the Naturalizer, Vionic, Dr, Scholl’s, Sam Edelman and Ryka, among others, took a not-surprising hit to its top-and bottom-line in the fiscal fourth quarter ended January 30. Management, however, took the opportunity in its quarterly conference call with Wall Street analysts to outline the balance sheet and cost/expense structure improvements that set Caleres up for a solid road to profitability.

As Chairman and CEO Diane Sullivan outlined the upside, CAL shares were relatively unchanged as the declines in revenues and net income came in above analysts’ estimates for the quarter.

CAL reported $2.1 billion in sales for the year, down 28 percent from fiscal 2019, reflecting the effects of COVID-19 and the associated economic lockdown. Full-year DTC business reached 73 percent, up from 68 percent in fiscal 2019.

Famous Footwear’s total sales were $346.7 million in Q4, down 6.2 percent from fiscal Q4 2019. Company SVP and CFO Ken Hannah said on the call that the “predictable, sequential seasonal sales decline in Famous Footwear from the third quarter to the fourth quarter was appreciably less” and pointed to the smaller year-over-year sales decline as evidence of Famous Footwear’s continued ongoing momentum, driven by “still strong athletic sales and continued strength in its e-commerce business. Famous Footwear’s comp-store sales were down 1.8 percent in the fourth quarter, with e-commerce sales surging approximately 51 percent for the 13 weeks period.

Sullivan called out Famous Footwear’s operating earnings of $14.8 million in the fourth quarter, which were 43 percent greater on an adjusted basis versus last year despite the sales decline. “This outstanding performance is a direct result of the strength in our e-commerce business, aggressive expense control and tight and rigorous inventory management,” said Sullivan.

She continued, “As we have detailed in the past, our e-commerce business at Famous experienced a significant increase during 2020 and remained strong even as our fleet began to reopen.”

For the full year, Famous Footwear sales were $1.3 billion, down 20.4 percent year-over-year, driven primarily by the temporary store closures earlier in the year and the non-traditional back-to-school season. The year’s comparable-store sales were up 1.6 percent, and annual e-commerce sales were up 75 percent over fiscal 2019, representing 22 percent of sales for fiscal 2020, up from 10 percent in fiscal 2019.

The Caleres Brand Portfolio segment saw $234 million in sales in the fiscal fourth quarter, a decrease of 32.4 percent versus the prior-year quarter.

Ongoing improvements in brands with greater penetration in Wellness, Comfort and Sports sales were said to be offset by outsized sales declines from other brands, specifically Allen Edmonds and Naturalizer, who “experienced ongoing pandemic-related effects and dampened store performance.”

“Despite the mixed recovery in this segment, we are very enthusiastic about the brand’s portfolio’s potential to drive value, and we expect an overall recovery in the footwear market to act as a tailwind for our portfolio,” said Sullivan.

The company’s consolidated gross margin was 39.9 percent of sales in the fiscal fourth quarter, down 20 basis points versus the prior-year comp quarter.

Famous Footwear posted a gross margin of approximately 41 percent in Q4, a 168-basis-point decline driven by the growth and increased penetration of e-commerce related business in the quarter. Hannah said e-commerce margins increased more than 400 basis points in the period at Famous, reflecting the “higher e-commerce productivity due to buy online/pick-up in-store, curbside and ship-from-store initiatives.” Full-year gross margin for Famous Footwear was 39.2 percent of sales, reflecting a “higher mix of e-commerce sales due to the temporary retail store closures and increased promotional activity to liquidate seasonal inventory during the year.”

The annual SG&A expense was $889.5 million, a decline of $176.3 million, compared to fiscal 2019, led by the “reduction in variable cost, ongoing savings from the voluntary early retirement plan commenced in the fourth quarter of 2019 and lower lease expense from closing 104 total retail doors during the year.” 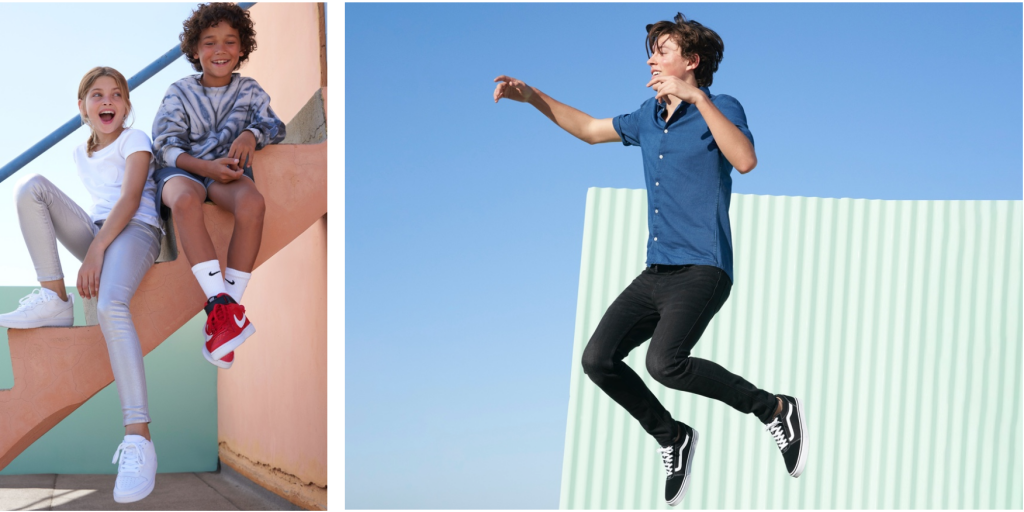 The Brand Portfolio operating earnings of $1.2 million for the quarter reflected a $20 million reduction in expenses year-over-year.

Caleres posted a net loss of $77.0 million, or a loss of $2.11 per diluted share, in the fiscal fourth quarter, compared to net earnings of $0.4 million, or earnings of 1 cent per diluted share in fiscal Q4 2019. The adjusted earnings per share for the fiscal fourth quarter of 2020 were $.0.03 per share, excluding $1.03 of COVID-19-related expenses associated with non-cash impairments of property and lease right-of-use assets primarily for Allen Edmonds and tax valuation allowances related to deferred tax assets, a total fair value adjustment of 48 cents associated with the mandatory purchase obligation for Blowfish Malibu, 40 cents of expense related to brand exits, and the Vionic integration-related costs of 7 cents taken in the fourth quarter.

The adjusted loss per share was $1.40 for the full fiscal year excluding $10.40 of charges, made up of $6.35 of non-cash goodwill and intangible asset impairment charges, $3.10 of COVID-19-related expenses associated with non-cash impairments or markdowns of inventory, property and leased assets, and tax valuation allowances related to deferred tax assets.

During 2020 Caleres closed 60 Naturalizer stores, with 73 more stores slated to close by the end of the first quarter, leaving seven flagship locations in the U.S. and Asia and approximately 150 partner stores worldwide.

“We also continued to generate significant levels of cash, particularly as our e-commerce business accelerated and our stores and the stores of our partners reopened. And we used that cash to restore our overall debt to below pre-pandemic levels by the end of the fiscal year 2020. In fact, since the end of the first quarter of 2020, we have proactively paid down approximately $190 million of debt,” explained Sullivan.

Caleres generated $24.6 million in cash from operations in Q4 and ended the year with $88.3 million of cash on hand. The company reduced its credit facility borrowings by $50 million during the fourth quarter to end the year at $250 million, or $25 million below last year’s pre-virus levels.

“All told, we ended the year with a solid liquidity position consisting of approximately $88 million in cash and $350 million of capacity on our asset-based revolving credit facility,” Hannah concluded.”

“With respect to Famous, the good news is, they have been operating at a lower inventory level throughout 2020 obviously, and we expect that they will be down in the range of 5 percent to 10 percent on their inventory levels typically going through the rest of the year,” Sullivan said.

Looking ahead, Sullivan said it expects Famous Footwear to be an “important and strong driver of improved performance in 2021, as we continue to leverage our inherent competitive advantages.”

She explained, “First when it comes to our product, we will continue to offer what the consumer wants through a balanced assortment of athletic, sport and seasonal style. We will continue to leverage our sport and athletic leadership position, the part of the business we’ve always been known for, to capitalize on the ongoing demand for these versatile and active styles. We expect the consumer to continue to gravitate toward well-known brands in these categories, and Famous is situated exceptionally well to benefit from this trend. Further underscoring this fact is that our Top 15 brands represented approximately 77 percent of our sales during the year.”

Turning to the Brand Portfolio, Sullivan outlined the future drivers of the business as they divest others.

“Among the brands with terrific potential for growth in market share, revenue and margin, as we progress to 2021 is our Sam Edelman brand,” Sullivan detailed. “As you know, Sam serves as the cornerstone offering of our portfolio and is granted by its inherent shift and ability to shift with a consumer. The brand made significant strides during 2020 to adjust the line and position itself to grow.”

She continued, “In addition to Sam, several of our other brands in the portfolio—due to their foundation in Wellness, Comfort and Sport—are also exceptionally well aligned with the current tenor of the marketplace. We think they are well-positioned to further their momentum. They include Vionic, Dr. Scholl’s, Ryka, and Blowfish.”

But external forces may also affect the business. Sullivan shared that it has $60 million to $70 million in product receipts that are delayed, presumably due to the ongoing container shortage and port issues.

“Right now, there are about $50 million of receipts that are delayed for Famous Footwear, and there are about $10 million to $20 million delayed on the Brand Portfolio side,” Sullivan revealed. “It’s hard to tell exactly when we’re going to be caught up fully concerning all of those receipts. We don’t have the visibility yet of what that looks like. There are a number of actions that we’re taking, and we’re taking a look at this week-to-week.”