Black Friday Fails To Bounce Back To Pre-Pandemic Levels 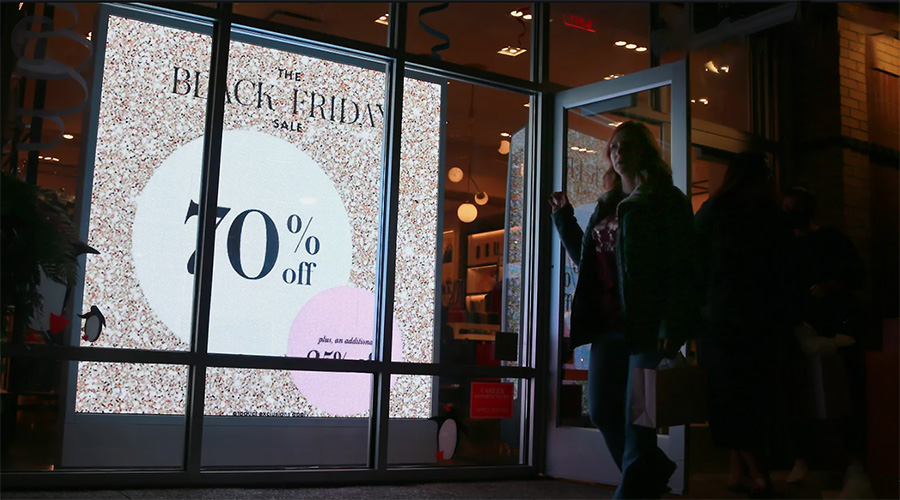 Traffic in-store and online on Black Friday was subdued due to fewer doorbuster sales on the day and earlier holiday shopping in a season increasingly dictated by supply chain challenges. On the positive side, in-store traffic saw a strong recovery year-over-year.

The year-ago period was constrained by limits on in-store occupancy and fewer in-store doorbusters to reduce crowds amid the pandemic. According to Sensormatic Retail Technology Solutions, in-store traffic at U.S. brick-and-mortar retail stores in 2022 jumped 47.5 percent year-over-year.

Traffic on Friday, however, was down 28.3 percent compared to 2019, the last pre-pandemic year. Sensormatic attributed the decline to holiday purchases that started for many consumers in October.

Sensormatic found on Thanksgiving day, visits to brick-and-mortar stores cratered 90.4 percent from 2019 levels. Target, Walmart and Best Buy opted to keep their doors closed to customers on the holiday. Target has said it would be a permanent shift for its business.

Concerns over out-of-stock items and potential shipping delays also spurred earlier purchasing by consumers. Sixty-one percent of shoppers surveyed by the National Retail Federation (NRF) said they had started their holiday shopping before Thanksgiving, up from 51 percent a decade ago.

According to Adobe, out-of-stock messages on retailer websites were up 124 percent through Friday versus pre-pandemic levels, and appliances, electronics, housekeeping supplies, and home and garden items have the largest stock-out rates.

Black Friday has experienced leaner crowds well before the pandemic as deals retailers have offered deals earlier and later in the holiday season, both in-store and online.

Indeed, online spending on Black Friday failed to increase year-over-year for the first time since Adobe Analytics began tracking the figure in 2012, reaching only the low end of Adobe’s predicted range. According to the company, Black Friday’s online sales fell to $8.9 billion from $9 billion last year.

Vivek Pandya, lead analyst, Adobe Digital Insights, said, “Shoppers are being strategic in their gift shopping, buying much earlier in the season and being flexible about when they shop to make sure they get the best deals.”

Adobe found that among those making online purchases on Black Friday, 44.4 percent of those sales were made by smartphone, a 10.6 percent increase from last year.

Retailers are further motivated to avoid promotions as tight inventories and higher costs for raw materials, freight and labor are expected to lead to lower fourth-quarter profit margins for many. Investment bank Cowen determined Black Friday had the lowest level of clearance goods in five years or more.

Forrester Research analyst Sucharita Kodali told Reuters, “Even though the holiday season should be okay from a sales standpoint because retailers are discounting less, the margins won’t necessarily be higher because of inflation.”

Similar to Sensormatic, RetailNext found U.S. store traffic on Black Friday to be down 27 percent compared to 2019, but net sales were comparatively better, only down 5 percent. While volume was down, the top-line benefited from the average ticket of an item being 11 percent higher than 2019, the average units per transaction expanding 6 percent and the average transaction value showing an 18 percent increase.

Lauren Bitar, RetailNext Head of Insights, said in a statement released early Sunday, “Shoppers who are coming to stores are coming to shop, and there’s a good chance we’ll see this trend continue through Sunday.”

Year-over-year, RetailNext found U.S. in-store traffic to be up 60.8 percent.

Mastercard SpendingPulse, which tracks all forms of payments, including cash and credit cards, found Black Friday sales surged 29.8 percent through 3:00 p.m, running above its 20 percent growth forecast for the day. Sales in stores were up 42.9 percent.

“Retail spending has been on the rise throughout the day, and it speaks to the strength of the consumer,” said Steve Sadove, senior advisor for Mastercard and former CEO and Chairman of Saks. “Our latest Mastercard SpendingPulse reports show retail sales up 30 percent compared to last year, and we anticipate a positive holiday season well beyond Black Friday.”

Retailers’ moves to encourage buying holiday gifts earlier could also lessen the importance of Cyber Monday, the first Monday after Thanksgiving. Adobe forecasted e-commerce sales on Cyber Monday, the biggest online shopping day of the year, to be between $10.2 billion and $11.3 billion.

The NRF expects U.S. retail sales during November and December to rise by a record 8.5 percent to 10.5 percent from a year ago to as much as $859 billion. The average increase was 4.4 percent over the past five years. The forecast was made before the World Health Organization declared Friday that a new strain of the coronavirus, first detected in South Africa, was a global “variant of concern.” The move triggered a stock sell-off Friday due to worries that travel restrictions and other curbs would derail the global economy’s recovery.