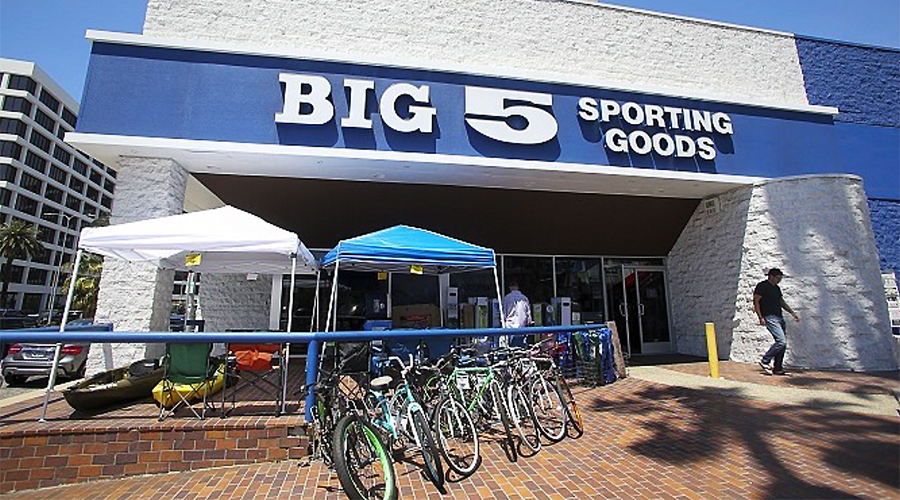 Big 5 Sporting Goods Corp.’s earnings more than tripled in the third quarter ended September 27 as the West Coast chain benefited from participation shifts toward fitness and outdoor activities during the pandemic. Same-store sales jumped 14.8 percent for the quarter and are up 15.1 percent so far in the fourth quarter.

On a conference call with analysts, Steve Miller, president and CEO, said from both a sales and earnings standpoint, the third quarter was “by far” the strongest of any quarter in Big 5’s history.

“With so many people looking to stay healthy and active in the current environment, our recent sales have benefited tremendously from recreational trends, which corresponds nicely with our product mix,” said Miller. “We have seen exceptional sales strength across a broad array of our home fitness and outdoor recreational product categories. While we recognize that these surges in demand have been truly extraordinary and are unlikely to continue at this level indefinitely, we do believe that the ongoing consumer shift favoring fitness and recreation should benefit our business in the long run.”

He also noted that besides the sales, the retailer benefited from margin strength and adjustments to its cost structure put in place due to the pandemic that is producing significant operating leverage. In the quarter, Big 5 was able to fully pay down its revolving debt to mark the first time in its history as a publicly-traded company that it has operated with zero debt. Big 5’s board also doubled its quarterly dividend payout to 10 cents from 5 cents.

Hard Goods Revenues Climb Nearly 40 Percent
Net sales grew 14.6 percent to $305 million. The 14.8 percent same-store gain came against a 0.3 percent increase in the year-ago third quarter and reflected broad-based strength across geographic markets. When reporting second-quarter results on July 28, Big 5 said it expected same-store sales for the full third quarter to increase in the range of 14 percent and 20 percent.

By month, comps were up 31.9 percent for July, 7.9 percent in August, and 5.9 percent in September. Miller added, “We achieved these sales increases in August and September despite extraordinary headwinds in our team sports and back-to-school related categories as a result of COVID-19.”

Sales of team sports products were negatively impacted by widespread suspensions and cancellations of league seasons and the shift to virtual schooling across the vast majority of its market-led to weak back-to-school related sales. The declines in team sports products were pronounced in August and September. Excluding team product, comps would have exceeded 20 percent in August and in September.

Sales in late August and in September were negatively impacted by widespread wildfires throughout its Western markets, which caused poor air quality that limited outdoor activity.

Same-store sales for apparel decreased in the high-single-digits and footwear was down in the high-teens. The entire decrease in apparel was attributable to weak sales of team sports apparel. Significant declines in cleated footwear supporting team sports likewise accounted for most of the footwear decline. Footwear was also impacted by weak back-to-school sales.

Big 5 benefited from a significant increase in average sales driven by increases both in the number of units per sale and in the average price per unit, which was partially offset by a mid-single-digit decrease in customer transactions.

Merchandising Margins Expand 277 Basis Points
Gross margins in the quarter improved 380 basis points to 36.1 percent. The improvement was largely due to an increase in merchandise margins by 277 basis points due to a reduction in promotional activity along with a favorable product mix. The gross profit margin improvement also reflected reduced store occupancy and warehousing costs as a percentage of sales, partially offset by lower distribution costs capitalized in inventory for the quarter.

Selling and administrative expenses decreased 7.2 percent, primarily due to lower advertising expenses and lower employee labor expenses, reflecting reduced store operating hours during the period. As a percent of sales, S&A expenses decreased to 23.4 percent from 28.9 percent in the prior year, as a result of cost containment measures and higher sales volume.

Inventory at the end of the third quarter was down 18 percent despite the carryover of a significant amount of last season’s winter product because of unfavorably warm winter weather and also carrying higher team sports-related inventory due to delays and suspension of league seasons as a result of COVID-19.

Barry Emerson, CFO, said on the call, “Our summer seasonal inventory sell-through was excellent, and we should be well-positioned with a fresh assortment for next year. For this coming winter season, we believe we have a compelling mix of seasonal merchandise that will help people remain active and healthy. And, we expect our strong value proposition to continue to resonate during a time of economic uncertainties.”

Due to the strong trends, cash flow from operations was a positive $136.4 million in the first nine months compared to a positive $13.7 million in the prior-year period. The retailer had zero borrowings under its revolving credit facility and cash of $55.7 million, representing a $111.3 million improvement in its net cash position on a year-over-year basis and a $74 million improvement compared to the end of the second quarter.

Cautiously Optimistic On Holiday Sales
Looking to the fourth quarter, Big 5 said same-store sales were up 15.1 percent through October 25. Strong quarter-to-date merchandise margins reflecting a continuation of recent trends were also being seen.

Miller said similar to the third quarter, the sales strength has been broad-based throughout geographic markets with virtually all the categories that performed well in the third quarter continuing to perform at elevated levels. Additionally, although team sports products continued to run below last year in the fourth quarter, they are down to a lesser degree than the third quarter in part because some markets are seeing a resumption of organized team sports. Team sports categories also comped against notably smaller numbers in the fourth quarter as opposed to the third, so they will represent a smaller impact on fourth-quarter results.

However, Miller said a number of factors could impact Big 5’s results positively or negatively for the rest of the year, the largest of which is likely to be how the pandemic plays out over the period, particularly as it impacts demand for outdoor recreation as well as holiday gifting. As always, winter weather will have a major impact on sales over November and December and remains “unpredictable.”

As a result, Big 5 continues to provide a wide outlook range. For the remainder of the quarter, Big 5 expects comps in the range of negative 5 percent and positive 5 percent year-over-year. Assuming comps within that range, same-store sales for the full fourth quarter are projected to be in the range of flat to positive 7 percent.

EPS is expected to range from 35 cents to 60 cents a share, which includes an after-tax insurance settlement benefit of approximately $2.1 million, or 10 cents, associated with a fire at the company’s Pasadena store. This compares to a fiscal 2019 fourth-quarter same-store sales decrease of 0.6 percent and earnings per diluted share of 2 cents, including a 2 cents per share charge for asset impairment. The year-ago quarter was impacted by unseasonable winter weather.

“All that said, we are excited about our merchandise assortments,” Miller added. “And, as we have done all year, we are approaching the remainder of the quarter prepared to make adjustments as necessary. And, we will, once again, be ready to capitalize on any potential upside opportunities that might arise.”