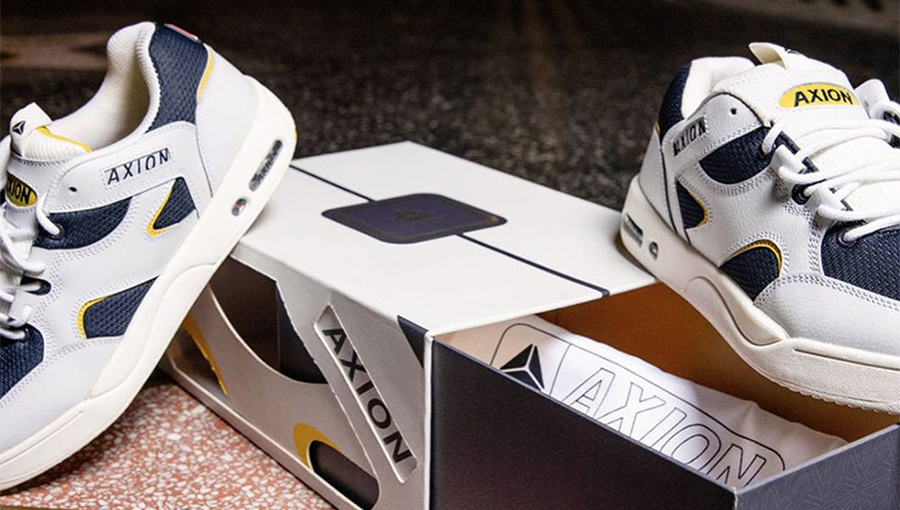 Owners Eric Stalker and Partner and President Steve Harden announced that the Axion footwear brand has returned to the category.

Stalker and Harden teamed up with OG skater and its original founder of Axiom Footwear, Kareem Campbell as Partner|Creative Director; Dustin Deardorf, Footwear Designer; Jeff Pool, VP Sales and other key players with decades of experience in the skateboarding world and brands including Adidas, DC, Sole Technology, Supra, Oakley, VF, and others.

Harden, former President of Supra & KR3W said, “We are ecstatic to have such a world-class team surrounding us as we (re)launch Axion. The initial response from retailers, international distributors and most importantly, consumers, has been remarkable, exceeding even our wildest imaginations.”

Axion Footwear went live on October 15 launching its website as a tribute to OG skater Guy Mariano with a remake of Axion’s bestselling shoe the Mariano renamed Genesis. Harden further added, “The (re)launch was intended as a small capsule and tribute to our rich and iconic history. Nobody, including me, would’ve guessed we’d sell out in less than 36 hours, THANK YOU!”

Said Stalker, “Acquiring and relaunching Axion to the global marketplace has been a dream of mine since my youth, and now it is a reality. Axion was the brand that everyone talked about and wore. It wasn’t just a shoe company, it was a statement, more than that a way of life. Now we get to create the next chapter of Axion, and I truly hope it fills the void that everyone has had since its original departure by paying homage to its legacy and that the future of the brand reclaims its status in the industry among an entirely new generation.”