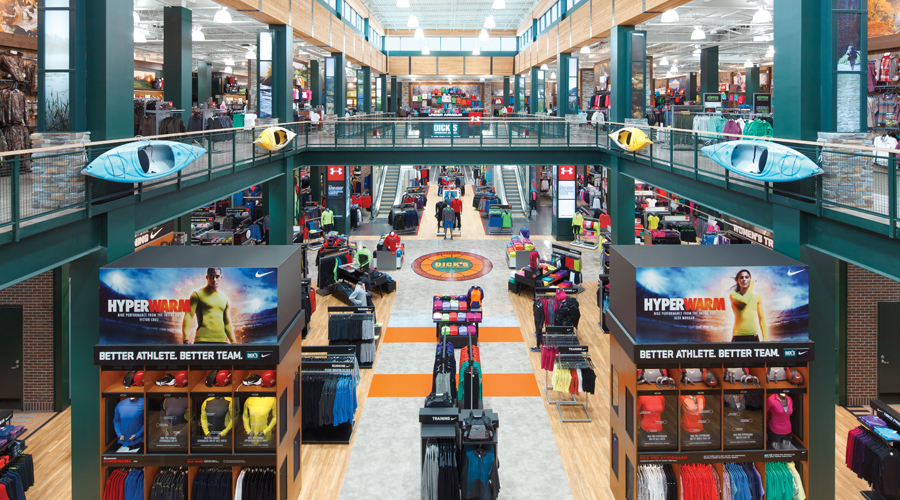 Dick’s Sporting Goods (NYSE:DKS) delivered a strong third quarter that caused it to lift its overall guidance for the year. But citing concerns over warmer weather, the country’s leading sporting goods retailer gave a conservative outlook for the fourth quarter that was below Wall Street’s targets.

On a conference call with analysts, Ed Stack, chairman and CEO, said unseasonal weather was already impacting the chain’s cold-weather apparel categories in the third quarter. The impact is more meaningful because cold-weather merchandise carries higher margins on average. Said Stack, “We were hoping it would have gotten colder than it has already.”

The warning comes as the industry faced a mild winter across the populous East Coast in 2015 that impacted holiday sales across retail and led to cautious buying patterns for the 2016 fall/winter season.

In mid-day trading on November 15, shares of Dick’s were down about 9 percent.

Outside the weather concerns, Dick’s delivered an impressive third quarter that showed the company was taking advantage of the exit of Sports Authority, Golfsmith, Sport Chalet and others from the marketplace.

In the quarter, earnings rose 3.6 percent to $48.9 million, or 44 cents per share. The latest quarter included charges of $7.6 million pre-tax, or 40 cents per share, including professional fees, to begin converting former Sports Authority stores to the Dick’s banner. Excluding non-recurring items, adjusted earnings were up 3.3 percent to $53.6 million, or 48 cents. Results handily exceeded guidance calling for earnings in the range of 39 cents to 42 cents a share.

Outdoor And Golf See Gains
Among the categories, Stack noted that both outdoor and golf comped positively at the Dick’s Sporting Goods chain. Outdoor gains were driven by strength in areas such as camping, paddling and watersports more so than hunting.

Apparel’s growth was led by licensing, which was helped by favorable teams in the MLB playoffs. Said Stack, “We reopened stores when the Cubs and the Indians clinched the pennant and both cities responded.” The licensing growth helped offset declines in some cold-weather categories, although apparel was still up excluding licensed sales.

Footwear was described as “strong,” supported by the rollout of the retailer’s full-service footwear decks, which now number 182 with another two arriving for the holiday season.

Regarding Field & Stream, Stack said the company remains “pleased with the performance” of the concept, with profitability improving year over year. But he did note that the chain is a “bit weather sensitive” with categories such as boots and base-layer products.

Private-Label Push
Stack said the company was “very pleased” with the performance of key private-label brands such as Calia and Field & Stream that are an increasing part of its differentiation efforts. Calia in 2017 will receive more square footage in a number of stores to test a broader assortment.

Among its branded partners, Stack called out Adidas as a brand that will be receiving more square footage in stores next year.

Total inventory increased 4.8 percent at the quarter’s close, well below its 10.2-percent sales growth in the quarter. Said Lee Belitsky, CFO, on the call, “We are very comfortable with our inventory levels in the quality of our merchandise as we transition into the holiday selling season.”

Stack added that the company is also “making progress” in working through the customer information acquired in the Sports Authority bankruptcy case and will be directly marketing to those customers during the holiday season. Stated Stack, “There’s an awful lot of new names.”

The CEO also highlighted the acquisition in early November of Golfsmith’s “strongest assets,” including intellectual property and leased designation rights. “This marks a terrific opportunity for us as we continue to build our position as America’s number one golf retailer and focus on capturing a significant amount of market share as the industry consolidates,” Stack said. The acquisition is expected to be accretive to earnings in 2017.

Significant digital investments continue, and the relaunch of Dicks.com under its own platform is on track to occur in the first quarter of 2017. E-commerce sales will end up being just less than $1 billion this year “and we believe there is meaningful opportunity for future growth,” Stack said.

Stack also announced that Dick’s has reached an agreement to become the official technology provider for Little League baseball and its affiliated organizations. With over 2.1 million athletes, coaches and administrators, Little League will gain access to Dick’s Team Sports HQ platform.

Dick’s officials indicated they will keep 22 of the 31 Sports Authority leases it had retained the right to acquire from the former competitor’s bankruptcy proceedings. The leases are primarily located in California and South Florida. Three stores are re-opening this weekend, with the majority expected to reopen during the first quarter of 2017.

In the Golfsmith buy, Dick’s plans to evaluate approximately 40 leases with similar flexibility to retain or reject. It is operating 30 Golfsmith locations in which it also acquired the store inventory, and plans to convert them to the Golf Galaxy brand by the end of the fourth quarter.

Asked why the company acquired Golfsmith given slower sales in the overall golf category, Stack said the company retained the “30 very best stores” of Golfsmith with rights to reject leases. A “very modest investment” is also planned with the changeover, largely including new POS terminals, changing banners to Golf Galaxy and improving real estate deals.

Regarding the impact of the closing of Sports Authority and Golfsmith, Stack noted that Dick’s stores that had competed with one of the chains are doing better than stores that weren’t geographically affected by any closings. The company is also having conversations with vendor partners about bigger merchandise opportunities due to the closings. Said Stack, “The partnership and the communication and the collaboration with the brands has been very helpful.”

Regionally, Stack noted that Dick’s is most focused on increasing penetration in Florida, California and the Pacific Northwest. Category-wise, Stack feels Dick’s is particularly capturing share in team sports with the Sports Authority exit, since there’s less competition from other stores when compared to the footwear and apparel categories.

Consolidated same-store sales are projected to increase between 3 and 4 percent versus a previous projection of between 2 and 3 percent. Same-store sales rose 0.2 percent in 2015.

As under previous guidance, operating margins are expected to decline year over year as higher SG&A expenses offset improvements in gross profits.

Warm-Weather Woes
In the Q&A session, Stack stressed that the conservative Q4 stance was solely tied to weather and not due to any concerns around the promotional climate, especially given the company’s lean inventory position. The lower end of its guidance assumes the unseasonal weather continues, while the upper end assumes the arrival of more seasonable weather in December and January.

“Where it had gotten cold here in there a little bit in the Northeast a couple weeks ago, a couple weekends ago, business was terrific,” Stack said. “It was great. We’re not sure how sustainable this is going to be.”

Despite the lean inventory levels, Stack said Dick’s has what he described as “partnership orders” with its key vendors to receive product if the weather gets colder while also avoiding the inventory exposure if it stays warm. Said Stack, “Obviously it would be better if it’s cold, but if it’s warm, we don’t think we’ve got any significant exposure. Our team has done a great job planning for that and having contingencies associated with the weather pattern.”

Asked about the overall competitive landscape, Stack remained bullish on Dick’s prospects to gain market share as the industry consolidates. He added, “We’re the ones with the balance sheet to be able to take advantage of those opportunities. We can move quickly, and I really like the position that we’re in right now.”