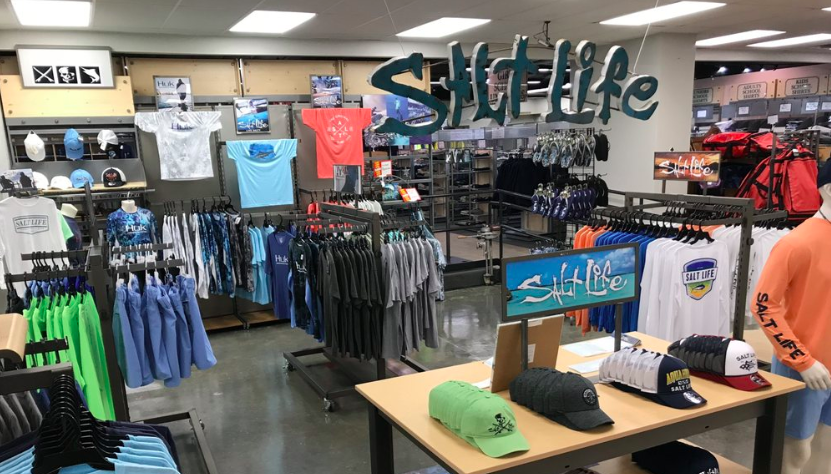 Delta Apparel reported a sharp uptick in earnings in its fourth quarter ended September 29. Strong results from its expanding digital print and fulfillment businesses offset weakness at both Salt Life and Soffe tied to Hurricane Florence.

On a conference call with analysts, Bob Humphreys, chairman and CEO, noted that the company has changed its reporting segments from Basic and Branded to Delta Group and the Salt Life Group reflecting changes in the company’s business model due to sales and acquisitions.

The Salt Life Group segment, accounting for the remaining 10 percent of revenues, includes the Salt Life and Coast lifestyle brands.

In the Delta Group segment, sales in the quarter grew nearly 4 percent and was led by digital print and fulfillment business, DTG2Go, which registered net sales growth of more than 120 percent. DTG2Go was acquired in March of this year, merged into its Art Gun business, and recently added another acquisition, SSI Digital Print Services.

Humphreys said the acquisitions “solidify DTG2Go as the industry leader in digital print and fulfillment capabilities and sets the stage for meaningful expansion in this high-growth space over the next several years.”

He said DTG2Go is the only digital print supplier in the world providing a seamless fulfillment solution integrated with a vertical manufacturing platform via Delta’s Activewear’s low-cost supply of fashion and core basic garments, including fleece and shorts. After its recent acquisition activity, DTG2Go now has a network of six digital print and fulfillment facilities and has the capacity to print over 70,000 unique prints per day and reach over 90 percent of the U.S. population with 1- to 2-day shipping. The DTG2Go ended the year with sales of $27 million, is expected to nearly quadruple to $100 million over the next 4 years, and generate double-digit operating margins.

Fourth quarter performance in the remaining Delta Group business was “generally solid” with some softness in the Soffe military business due to the loss of a shorts program. The Soffe distribution center was also forced to close for eight days due to Hurricane Florence, delaying shipments of well over $1 million.

Humphreys said the Soffe business is growing at big-box retail and sporting goods stores and “growing fairly nicely” on its B2B e-commerce site. Humphreys added, “We would expect some slight top line growth out of Soffe this year. Our costs at Soffe are continuing to come down. And so we would expect in the next maybe year or two to start getting to that mid-single-digit operating profit at Soffe.”

Results of Delta Activewear were generally in line with the prior year quarter. The Delta Group segment’s operating income was $6.8 million in the quarter, up 83.8 percent.

In the Salt Life segment, sales were down due as two of Delta’s major distribution centers closed due to Hurricane Florence. Delta estimated the shutdown of the DCs resulted in approximately $3 million of missed sales across brands.

Sales in the Salt Life business grew approximately 2 percent year-over-year but would have been up nearly 10 percent if the DCs weren’t impacted by the hurricane. Humphreys said, “Not only were sales to independent retailers impacted, but we were also not able to ship major retailers or orders on our e-commerce site right at the end of the quarter.”

On the wholesale side, Salt Life is growing with new regional and independent accounts outside of its traditional market strongholds and is seeing an “enthusiastic response” to the brand’s entry into international markets. A new store opened in Tampa and Salt Life now has six brick-and-mortar locations, including three in Florida, two in California and one in Georgia. Humphreys said, “Sales in this direct-to-consumer channel are growing nicely and we are targeting 12 additional store openings over the next 3 years with a focus on expansion within existing geographic regions.”

Salt Life’s expansion into higher-ticket performance and woven products is delivering strong double-digit growth and the company is seeing a positive market response to the Salt Life women’s swim line through a license agreement with SWIM USA. An expanded selection of bags within its accessories line is seeing a “good start” and Salt Life sunglasses, recently brought in house from a licensed arrangement, is “seeing some good traction.”

Finally, Salt Life’s new craft beer range continues to grow and its distribution continues to broaden. Said Humphreys, “This expansion adds additional visibility to the brand as it expands throughout Florida. We are accelerating our plans to expand Salt Life Lager’s distribution into key southeastern markets outside of Florida due to the positive market response we have seen to-date.”

Sales were $395.5 million, up 2.7 percent. Excluding $15.6 million of year-ago sales from Junkfood, sales increased 7 percent. Delta Group sales were $356.0 million, up 9 percent from $326.6 million in fiscal year 2017. Salt Life Group net sales were $39.4 million compared to $58.5 million in the prior year, with the decline due to the since-divested Junkfood business and other strategic shifts in non-core business.  Sales in our Salt Life brand were up 2.4 percent for the year,

Salt Life Group segment sales were $39.4 million, down 32.6 percent due to the sale of Junkfood. Sales in the Salt Life brand were up 2.4 percent for the year.

Said Humphreys, “To summarize, fiscal 2018 was a solid financial year for Delta Apparel. We delivered top line and bottom line growth and we enter the new fiscal year well-positioned to compete and grow in the current retail landscape.”